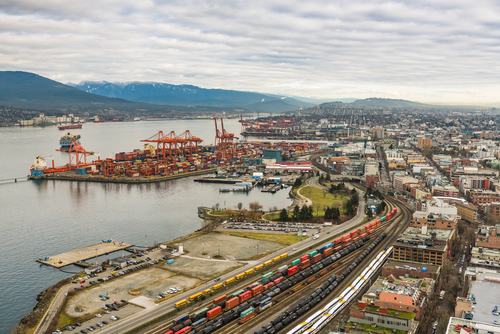 The Port of Vancouver, in the Canadian province of British Columbia, has expanded its market share in the competitive Pacific Northwest region of North America, which also includes the Port of Prince Rupert in Canada, and the Northwest Seaport Alliance of Seattle and Tacoma, in the US state of Washington.

Canada’s largest port, Vancouver’s share of the region’s containerized imports from Asia has increased steadily. For decades, Vancouver has played a major role in ongoing initiatives developed by Canada’s federal, provincial and regional authorities to create an Asia-Pacific Gateway that facilitates trade not just between British Columbia and East Asia, but between Canada as a whole and East Asia.

The Port of Vancouver is handled by three Class 1 railroads: CN Rail, CP Rail and BNSF. Of these, only CN Rail and CP Rail service the on-dock rail facilities at the port’s container and cargo terminals.

Like many other ports worldwide, Vancouver has suffered from congestion and high terminal utilization rates. In an effort to reduce such congestion, which slows down supply chains that operate between East Asia and Vancouver, Ashcroft Terminal, a 320-acre inland port, located 343 kilometers (212 miles) northeast of Vancouver, has been expanding its scale of operation.

Ashcroft Terminal provides inland transloading and container storage facilities in a spacious rural location that has direct access to major highways and railways leading to and from the port of Vancouver. Adjacent to the Trans-Canada Highway, Ashcroft Terminal is situated on the mainlines of both the Canadian Pacific Railway (CPR) and Canadian National Railway.

Ashcroft Terminal serves dozens of companies in the agricultural, forestry, mining, drilling and manufacturing sectors. In a sign of Ashcroft’s growing role in Asia-Canada trade, Singapore-based global terminal operator PSA International acquired a majority [60 percent] stake in Ashcroft in 2018, with an eye toward linking its transloading operations with potential markets in Asia and beyond.

Canada Trade and Shipping Outlook
TPM22: What We Learned — Container Shipping in the Crosshairs
Managing E-Commerce From Order to Delivery and Beyond
END_OF_DOCUMENT_TOKEN_TO_BE_REPLACED

GCT to expand Vancouver port capacity
10 May 2019
Terminal operator GCT Global's $160 million investment in the Vanterm facility is part of a larger effort to keep up with growing demand at the port of Vancouver, which officials expect to reach full utilization within 10 years.

DP World to buy Vancouver's Fraser terminal
09 May 2019
The purchase of Fraser Surrey Docks will increase the Dubai-based terminal operator's footprint on the Pacific coast of Canada, although the river port has limited potential for container cargo growth.

ILWU Canada urges members to vote for strike authorization
07 May 2019
Longshore workers in Canada are turning up the heat on the employers’ association in Vancouver as negotiations that began in February 2018 still have not replaced the contract that expired more than a year ago.

Dueling projects could slow Vancouver port expansion
08 Apr 2019
With container volumes increasing and capacity running short, Canada's largest port has rejected a proposal to expand GCT Canada’s Deltaport terminal in favor of a new facility it hopes will attract a third operator to the port.

Vancouver port launches rail upgrades amid delays
14 Feb 2019
The development project is designed to meet growing cargo demand as the port expands its share of intermodal traffic destined for eastern Canada and the US Midwest.

Transload facility to fuel West Canada grain exports
18 Dec 2018
The development of a grain transloading facility in western Canada by autumn 2019 will add to the export momentum that is building at Prince Rupert and Vancouver.

Vancouver rail delays ahead of winter worry shippers
04 Oct 2018
Dwell times at Vancouver rail facilities are approaching last winter’s levels, when port congestion was the worst in years, but terminal operators say the factors driving the current delays are not a harbinger.

Expanded Deltaport rail deepens Vancouver’s interior reach
24 Sep 2018
Vancouver, Canada’s largest container port, until now has been limited in its capacity to grow by a lack of surge capacity at its rail operations, which serve eastern Canada and the US Midwest.

Independent of averted Vancouver strike, ILWU contract talks proceed
10 Sep 2018
Neither the employers nor the union are saying what contract terms are being negotiated, other than to say these are “normal contract issues," a maritime employers’ association official said.

GCT and CN: Vancouver dwell time spike no reason for peak season worry
18 Jul 2018
Shippers express concern about a recent spike in container dwell times in Vancouver, but Global Container Terminals Canada and Canadian National Railway say the fluctuations do not mean things will get worse during peak season.

Canada container growth demands more infrastructure, innovation
30 May 2018
Ocean carriers, shippers, and other business decision makers have big plans for Canada, where strong container trade growth is expected in the immediate years ahead. The key task now is to fully fund vital infrastructure improvement and expansion projects to maintain that promising momentum.

Vancouver changes designed to prevent congestion, dray delays
24 May 2018
Shippers and other Vancouver trade stakeholders hope precautionary actions by the transportation ministry and terminal operator Global Container Terminals Canada, to increase driver pay rates and shift from a congestion-based appointment charge to a flat fee effective June 1, prevent driver strikes and congestion that have substantially delayed cargo in the past.

Vancouver stakeholders invest to prevent 2018 congestion repeat
17 Apr 2018
With container dwell times back below three days, port stakeholders in Vancouver are now focusing on the issue at hand, which is to marshal assets and share operating strategies so they are not caught flat-footed by a spike in volumes in peak season 2018.

Amid fluidity woes, Canada to review port efficiencies
15 Mar 2018
The review, led by the minister of transport and set for completion next year, also comes amid governmental consideration of privatizing Canadian ports.

Western Canadian ports, rails flex up after peak season delays
01 Feb 2018
Prince Rupert, Vancouver, Canadian National Railway, and Canadian Pacific Railway are expanding their assets and capacity to prepare for the peak season of 2018 after a troublesome peak last year.