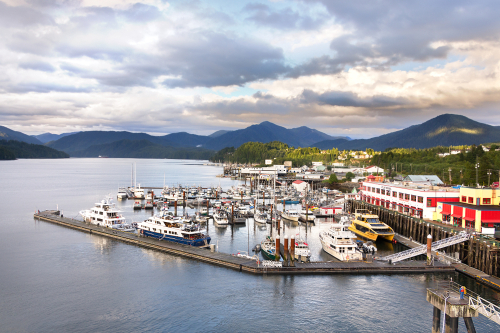 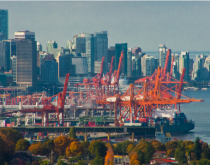 22 Jul 2020
Pacific Northwest ports in the US and Canada are focusing on terminal expansion projects to prepare for what they hope will be a return to growth after the COVID-19 crisis subsides.
MORE »

ILWU vote a window to new dawn for West Coast labor relations
10 Aug 2017
Will the vote be remembered as a narrow, ultimately inconsequential act, or a turning point premised on a message to the union leadership that something needs to change?

Video: 10 Years On, Prince Rupert Celebrates with Expansion
14 Jul 2017
In the 10th year of Prince Rupert's Fairview Container Terminal, CEO Don Krusel, joined JOC.com to discuss the key elements of its success, expansion expected for Q3, and status of long-term development to become a 2.5-million-TEU facility by early 2020s. This year Fairview's footprint will be expanded by 50 percent, a second berth and three new cranes will be added, increasing annual TEU capacity by 500,000.

Canadian ports zero in on fast release from mega-ships
04 Jul 2017
“With the big ships now, speed and flexibility are as important as reliability of service,” Gary Fast, associate vice president of international transportation at Canadian Tire, told the JOC Canada Trade Forum in Toronto.

British Columbia ports expand to attract more US cargo
07 May 2017
Vancouver and Prince Rupert are increasing their terminal capacity and improving their cargo-handling efficiency as they look to take additional market share from US West Coast ports.

Seattle-Tacoma ports claw back share from Canadian rivals
03 Nov 2016
A solid performance by the Northwest Seaport Alliance in September and year to date indicates that Seattle and Tacoma may have regained regional market share from the Canadian ports of Vancouver and Prince Rupert.

Seattle-Tacoma ports urged to take aggressive steps to stem cargo loss
07 Oct 2016
Seattle and Tacoma, which since last year have operated under the Northwest Seaport Alliance, rank fourth in the US as a port complex, but that could change if it continues to lose cargo.

Hanjin ships stranded off Canada for two weeks flummox shippers
20 Sep 2016
Canadian importers and exporters’ frustration is mounting after two Hanjin vessels — one set to sail to Tokyo and another to Seattle — have been stranded in Canadian waters for more than two weeks.

Prince Rupert studies breakbulk terminal
19 Sep 2016
The Port of Prince Rupert, British Columbia, is studying the feasibility of a new terminal that would handle breakbulk and bulk cargoes.

Pacific Northwest ports prep for alliance-operated mega-ships
30 Jul 2016
Ports in the U.S. and Canadian Pacific Northwest are planning feverishly for the larger cargo surges they know will occur in the coming years from big ships operated by powerful carrier alliances.

TPM 2016: DP World has big plans for its Canada terminals
05 May 2016
DP World Vancouver General Manager Maksim Mihic and JOC Senior Content Editor Alessandra Barrett met on the sidelines of the 16th TPM Conference to discuss the advantages of Canadian gateways against their U.S. counterparts, what makes Prince Rupert so successful, and DP World’s plans for expansion at both ports.

Cosco expects to remain the driving force at Prince Rupert
28 Mar 2016
In the nearly nine years since the Oct. 31, 2007, inauguration of container shipping services through Prince Rupert, British Columbia, Cosco has been the dominant carrier to the port that offers the fastest transit from Asia to the U.S. Midwest.

Prince Rupert considers further container terminal expansion
15 Dec 2015
DP World, the new owner of Prince Rupert's container terminal, and the port authority are already considering expanding the port’s annual capacity by more than 700,000 twenty-foot equivalent units — even though the latest buildout has yet to be completed.

CMA CGM gains slots to Prince Rupert, capping busy year for port
19 Nov 2015
The announcement this week by CMA CGM that it will share slots on China Ocean Shipping Company’s trans-Pacific service from Asia to Prince Rupert, Canada, caps off one of the more eventful years in the short history of the port’s container operations.

Pacific Northwest ports gain momentum after months of problems
31 Jul 2015
After bleeding market share in the first few months of 2015 because of congestion and labor problems, the Seattle-Tacoma gateway appears to be leveling off in the competitive Pacific Northwest. Port Metro Vancouver, British Columbia, is likewise leveling off, but Prince Rupert continues to register impressive double-digit gains compared to last year.

After rocky 2014, Pacific Northwest ports return to normal
11 Jul 2015
After bleeding market share earlier this year due to congestion and labor problems, the Seattle-Tacoma gateway appears to be leveling off in the competitive Pacific Northwest region. Port Metro Vancouver, Canada, is likewise leveling off, although Prince Rupert continues to register impressive double-digit gains compared to last year.

Record Prince Rupert volume shows staying power of US diversions
11 Jun 2015
The Port of Prince Rupert had another big month in May with total container volume increasing 45.6 percent over May 2014.

Seattle-Tacoma volume recovery lags rival Canadian traffic
19 May 2015
Container traffic in Seattle-Tacoma returned to normal in April as the vessel and container backlogs that had developed over four months of labor slowdowns dissipated.
Western Canadian grain exports on smoother rail ride
18 May 2015
Grain is moving by rail at a steady pace from Canada’s Prairie Provinces to export terminals in British Columbia’s Vancouver, Prince Rupert, and Thunder Bay.

Seattle, Tacoma ports lose share to Canadian ports
04 May 2015
Seattle and Tacoma took a big hit in the first quarter as its market share among Canadian Pacific Northwest ports took a dive amid longshore labor disruption.

Terminal expansion shows Prince Rupert is an idea that works
10 Mar 2015
Seven years ago the idea that a relatively obscure bulk port in a sparsely populated region of Western Canada would become one of the fastest growing container gateways in North America would have drawn smirks, and did, even though the vision of a gateway for Asia trade at that location went back to the early years of the 20th century.

US shippers, forwarders cite congestion strategies
03 Mar 2015
Shippers who tried to divert their containerized cargo to the U.S. East Coast during the paralyzing port congestion at West Coast ports in the last few months were not always successful because they did not have long-standing relations with carriers serving the East Coast, according to panelists at the 15th annual TPM Conference.