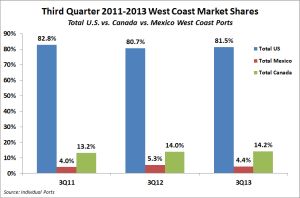 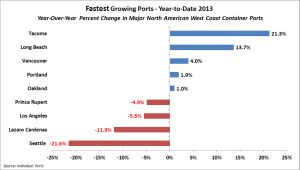 The major west coast Canadian ports, which include Vancouver and Prince Rupert, British Columbia, saw throughput volume totaling 891,186 TEUs in the third quarter of 2013, climbing 3.3 percent from 862,883 TEUs in 2012. Vancouver’s throughput rose 5.7 percent year-over-year to 754,082 TEUs, and its market share inched up from 11.5 percent to 12.0 percent. However, Prince Rupert saw a drop in throughput of 8.3 percent this quarter to 137,104 TEUs; its market share slipped from 2.4 percent to 2.2 percent year-over-year.

Throughput at Lazaro Cardenas tumbled 16.9 percent year-over-year in the third quarter to 273,727 TEUs. In an attempt to crack down on surrounding drug war activity and the import of chemicals used for drugs, the Mexican military took over administration and port captaincy of Lazaro Cardenas in early November. It is yet to be seen whether this will affect traffic at the port. 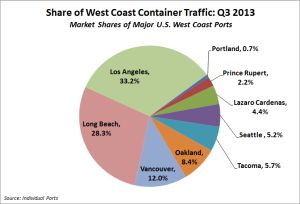 Overall U.S. throughput was up year-over-year in the third quarter, climbing 2.7 percent to 5,118,326 TEUs. Portland saw the largest year-over-year jump in throughput in the third quarter, with volume jumping 56.6 percent to 42,911 TEUs from a relatively low volume of 27,400 TEUs in the third quarter of 2012. July volume had the greatest comparison change; volume dipped from 16,521 TEUs in July 2011 to 2,283 TEUs in 2012 and rose to 15,712 TEUs in 2013. Josh Thomas, marketing and media relations manager of marine and industrial development at the port, explained that they were “experiencing slowdowns, shutdowns and diverted vessels at the container terminal due to a jurisdictional dispute involving the International Longshore and Warehouse Union, IBEW, their terminal operator ICTSI Oregon and the port. This was over jobs responsible for the plugging, unplugging and monitoring of refrigerated containers. That situation improved somewhat in August. While productivity remained below historic levels, container volumes did increase in the months and year following.”