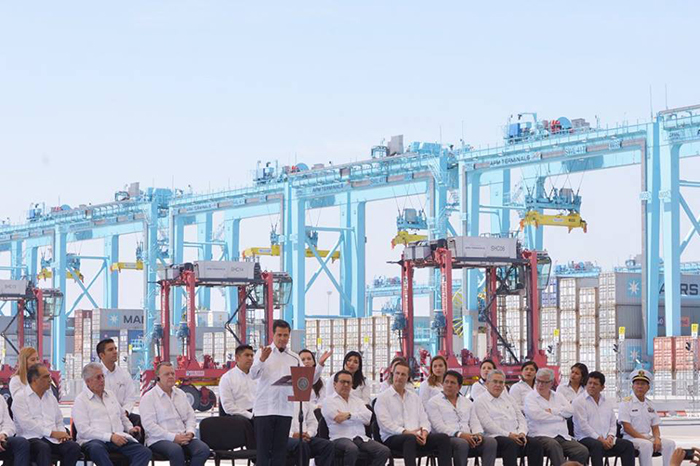 Mexican president Enrique Peña Nieto reiterates Mexico's commitment to free trade to a crowd at the inauguration of APM Terminals' new facility in the port of Lazaro Cardenas.

Expanding port capacity is an important part of Mexico’s commitment to free trade and increasing the reach of its products to overseas markets, according to President Enrique Peña Nieto.

Speaking at the launch of the new $525 million APM Terminals-operated facility at Lazardo Cardenas, Peña Nieto noted the country was well on its way to doubling throughput from the 260 million tons per year handled at its ports when he took office in 2012.

“If we are betting on free trade, on opening up more to the world — so goods made in Mexico can conquer other markets and world products, Mexico — we had to expand the capacity of our ports,” said Peña Nieto at the inauguration ceremony.

In April of 2015 the government said it will invest $5 billion to increase capacity and improve infrastructure and operations at the country’s ports, in a move primarily aimed at supporting expected growth in its automotive manufacturing and energy sectors.

With a large portion of automotive industry growth over the past two decades tied to the North American Free Trade Agreement, there are concerns over some of the rhetoric related to the trade deal that has been coming from US president Donald J. Trump.

The new semi-automated terminal in Mexico's second-busiest port can handle vessels with capacities up to 15,000 twenty-foot-equivalent units (TEUs) and has a total capacity of 1.2 million TEUs annually. It nearly doubles capacity at the port of Lazaro Cardenas from 27 million tons to 49 million tons annually. At full build, it will be capable of handling more than 4 million TEUs per year.

Søren Skou, CEO of the Maersk Group, the parent of APM Terminals, said the giant Danish shipping group was committed to Mexico.

“Markets with strong trade alliances tend to outperform global growth and Mexico alone has signed more than 45 free trade agreements, making it one of the world’s most important economies,” he said.

Port growth in Mexico outpaced that of Canada and the United States in 2016, as cargo volume rose 5.5 percent year-over-year to 4.1 million TEUs.

“The terminal’s strong geographic position on the coast and its connection with our inland terminal at Cuautitlán Izcalli in the industrial zone of Mexico City ensures our customers have easy access to inland distribution centers and a consumer market of over 120 million people,” said APM Terminals CCO Henrik Lundgaard Pedersen.

APM Terminals has a second terminal in Mexico at Yucatan.

Mexico was the third largest container market in Latin America in 2016, handling some 5.66 million TEUs.