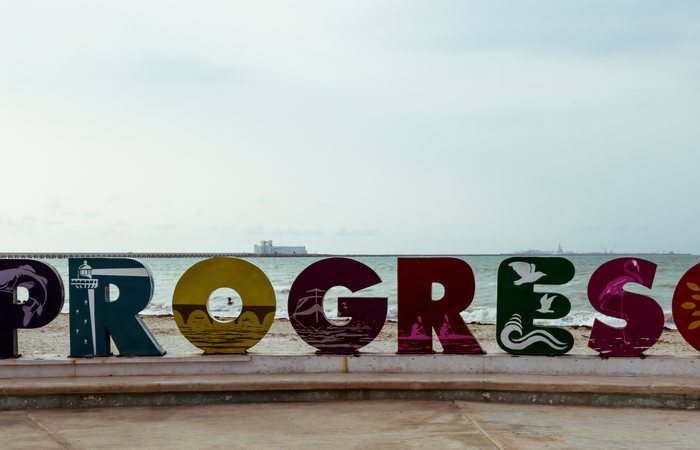 The Mexican Port of Progreso, a popular cruise liner destination, will undergo an expansion of its freight capacity, with an enhancement of the existing container terminal and the construction of a new one. Photo credit: Shutterstock.com.

Mexican authorities plan to build a new container terminal and auto handling facility at the small but fast-growing Port of Progreso to support an electronics, software, and electric car manufacturing cluster planned for the oft-neglected southern part of the country.

Héctor López Gutiérrez, the general coordinator of ports and merchant marine for the Secretariat of Communications and Transportation (SCT), which oversees Mexican ports, said the additional capacity, and an industrial park planned near the port, are designed to attract foreign companies to an area known mostly at present for its cruise port and tourism.

The SCT sees the area between the port and the nearby city of Mérida as having the potential to become an electronics and software cluster for Korean and Japanese manufacturers, with a particular focus on the creation of manufacture of electric cars, Gutiérrez said in an interview with JOC.com July 29. He spoke the day before taking part in a panel of industry leaders at the JOC Mexico Trade Conference in Mexico City.

The potential of the area has already drawn the attention of APM Terminals Yucatán, which operates the existing container terminal at the port. The operator said Aug. 8 it will expand the terminal’s container yard by 20 percent as part of a package of improvements aimed at meeting the needs of area trade.

The port, the sixth-largest in Mexico by container volume, is one of three slated for investment by the administration of Mexican President Andrés Manuel López Obrador (AMLO). The others are the Port of Manzanillo, where a new terminal would be built in the Lagoon of Cuyutlán, and the Port of Veracruz, where the investment will complete the expansion started by AMLO’s predecessor, former president Enrique Peña Nieto. That work included the construction of a new container terminal by Hutchison Group, which opened last month.

The volume of loaded cargo through Progreso, the third-largest port on the Gulf Coast, increased by 51.2 percent in 2018 over the year before, to 91,674 TEU, or about 2 percent of the total through Mexican ports, according to SCT figures. About 68 percent of the total was exports. Cargo volumes through the country’s entire port system increased by 8.8 percent, to 5.01 million loaded TEU in 2018, over the year before, the figures show.

Cargo volumes through Progreso increased by 20.6 percent in the first six months of 2019, to 50,398 TEU, compared with the same period the year before, while the volume through the port system as a whole increased by 3.4 percent, to 2.46 million loaded TEU, the SCT figures show.

APM Terminals Yucatán said it expects cargo volumes through the terminal to expand by 25 to 35 percent in 2019. As well as the yard expansion, costing $714,000, the operator said it will add two new reach stackers to the terminal and launch a “digital client portal to streamline transactional efficiency.”

“We are committed to long-term sustainable development of the region,” said Martijn Koolen, managing director of APM Terminals Yucatán, in a release announcing the investment on Aug. 8. He added that terminal upgrade — which follows $22.6 million invested in the terminal by APM since taking control of it in 2005 — would help meet the “region’s growing trade needs, as well as other investments to improve productivity.”

The development of Progreso is part of a broader plan by the AMLO administration to stimulate economic development in the areas outside Mexico’s ports, in part to bring manufacturing closer to the ports. SCT officials also believe that the coasts have been left behind as the nation’s manufacturing capacity has expanded dramatically in the country’s interior regions, especially in the Bajío region in the center of the country and around Mexico City.

Lopez said the expanded port will be well positioned to export goods to the US East Coast, as well as Central America and South America, and the education system and population of the area around Mérida will prove fertile ground for an electronics, software, and auto cluster.

“There is a high level of technological capacity there,” Lopez said. The state of Yucatán, in which Mérida and Progreso are located, is in the process of providing 130 hectares, about 320 acres, on which to locate companies attracted to the area, which the SCT is developing with roads, electricity, and water lines, he said.

Lopez also proposed a plan to create marine highways that would move containerized cargo by sea within the country to reduce truck traffic, cut transportation costs and fuel use, and provide a more secure route amid the country’s high level of cargo theft. He illustrated the plan by citing the example of a cargo move from Monterrey, in the north of the country, to Mérida, a trip of about 1,350 miles, sending goods through the ports of Tampico and Progreso. Another potential use would be in the movement of steel from the Port of Altamira in the north to Progreso for use in car chassis, he said.