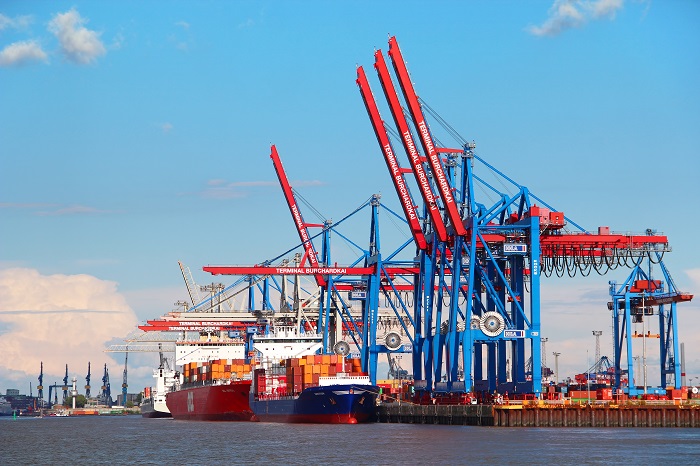 “Even if adding Wilhelmshaven, the German ports’ market share is now lower than after the financial crisis when market share losses reduced their piece of the pie to around one third,” Global Port Tracker stated. (Above: Hamburg port.) Photo credit: Shutterstock.com.

The two top German container gateways are losing share of the rising imports to Europe, and even a shift in THE Alliance’s trans-Atlantic services from Bremerhaven to Hamburg won’t be enough to prevent the combined market share of Hamburg and Bremerhaven from declining by 1 percent in 2018.

The second quarter of 2018 marks the deepest trough of their combined market share in decades, according to the latest Global Port Tracker. North Europe market growth is forecast to be 2.5 percent this year with much of that entering the continent through Hamburg and Bremerhaven competitors to the west, in Belgium and the Netherlands.

“Even if adding Wilhelmshaven, the German ports’ market share is now lower than after the financial crisis when market share losses reduced their piece of the pie to around one third,” the report stated.

While Europe’s two largest port gateways of Rotterdam and Antwerp posted strong growth in first-half volume — Rotterdam was up 6.2 percent to 7 million TEU, Antwerp was up 8.2 percent to 5.57 million TEU — third-placed Hamburg saw its throughput decline by 2.7 percent to 4.3 million TEU. The falling volume continued a decline in throughput that was experienced in the full year of 2017 when the port recorded a 1 percent drop to 8.8 million TEU.

Global Port Tracker noted that the growth gap between Hamburg and its western competitors is significant, and it is forecasting a year-over-year volume increase of around 6 percent for Rotterdam, Antwerp and Zeebrugge. Traffic growth also appeared to be concentrated on the Dutch and Belgian coastline. The French port of Le Havre decreased around 1 percent, although that did follow 2017 growth of 13.5 percent.

The root of Hamburg’s drop

But Hamburg’s decline in volume in the first half, and through 2017, was primarily a result of fewer empty containers being handled at Hamburg. At 525,000 TEU, the empties were 15.6 percent down on last year’s first-half numbers. This, in turn, is the result of depth issues in the Lower and Outer Elbe River fairway with carriers opting to use all available space on vessels coming up and down the river for full containers and send empties out via other other ports.

Axel Mattern, joint CEO of Port of Hamburg Marketing, explained, “Against the background of the still outstanding adjustment of the fairway on the Lower and Outer Elbe, it is understandable that shipping companies should utilize slot capacities on mega-ships calling at Hamburg primarily for loaded boxes,” he said.

“Unlike cargo bound for the local region and loaded boxes, transshipment cargo and empty containers are less tied to specific ports. We therefore hope that planning permission will be granted before the end of the year, and the fairway adjustment finally implemented after a wait of 17 years.”

Hamburg has been given the green light to begin dredging on the River Elbe, but there remains opposition from environmental groups. However, once the deepening of the river is completed, it will enable Hamburg to better compete with other European hubs for the mega-ship business with vessels calling at the port unconstrained by tidal windows and loading restrictions.