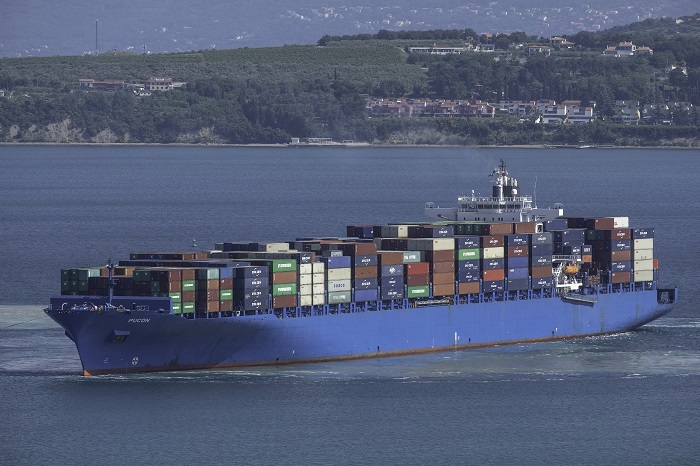 The leading container ports still call the shots — thanks to the schedules of the three powerful alliances — but rival smaller ports are adding business and in the process giving shippers options to northern and southern Europe. (Above: A container ship on the Mediterranean Sea.) Photo credit: Shutterstock.com.

LONDON — Europe’s top ports continue to hog the headlines — positive and negative — but their smaller rivals are also busy, with a rash of recent deals suggesting shippers could soon have alternative routes for their imports and exports.

The leading container hubs still call the shots, thanks to the networks of the three powerful alliances — 2M, Ocean Alliance, and THE Alliance — which have consolidated and strengthened the dominance of the Le Havre-Hamburg port range with the top duo, Rotterdam and Antwerp, significantly increasing their traffic thanks to the economic revival across the continent.

The alliances can also make or break ports’ ambitions, particularly across the competitive northwest European waterfront.

Calls by 2M and Ocean Alliance ships on the Asia-Europe trade have triggered a surge in traffic, prompting a 50 percent increase in the workforce at the Jade Weser terminal in the German port of Wilhelmshaven. It’s an improvement of note for Wilhelmshaven because it was dismissed as a white elephant a few years after its opening in 2012, after it failed to attract any scheduled services.

The 24 percent increase in traffic at the DCT Gdansk terminalto just short of 1.6 million TEU in 2017 was also due to the 2M and Ocean Alliance adding direct calls at the Polish terminal, which handled just 4,423 TEU when it opened 10 years earlier. Further, a 32.3 percent surge at Barcelona to 2.97 million TEU last year made it Europe’s fastest growing container hub; that leap was largely due to Mediterranean Shipping Company, Maersk’s 2M partner, launching five new services at the Spanish port.

European shippers don’t care which port handles their goods, and big companies attempt to strike the best deals with ocean carriers, while smaller firms rely on freight forwarders to find them the cheapest door-to-door freight rates.

Therefore, shippers stick with big ports as long as they don’t have an operational issue — such as the ongoing barge congestion at Antwerp and Rotterdam; that bottleeck hasn’t led to a loss of traffic — so far.

Meanwhile, there have been a few acquisitions of terminals in smaller ports in recent months that suggest a shift of traffic is likely, if they can lure shippers with cheaper costs, faster inland transits, and greater schedule reliability than at the top hubs.

The most significant move is Yilport’s ambitious bid to bring Taranto, the southern Italian container hub, back from the dead. The Turkish port operator recently submitted an offer for the operating concession for the container and multi-purpose terminals with the aim to “increase the annual cargo volumes rapidly” and utilize the port’s maximum capacity.

This is a challenging target, as the Taranto container terminal, which handled 892,000 TEU in 2006, five years after it opened, was liquidated in mid-2015, following the loss of its last intercontinental service in September 2014 when Taiwanese carrier Evergreen switched its Far East-Mediterranean-East Coast North America service to Piraeus.

The Mediterranean transshipment market has lost momentum after carrier alliances changed their networks and upped the number of direct port-to-port calls. Marsaxlokk, the Malta transshipment hub, registered just a 2.1 percent volume increase in 2017 to 3.15 million TEU, and volume at Gioia Tauro, the southern Italian terminal, tumbled 12.4 percent 2.45 million TEU. The latter faces tougher competition from North African ports and Marsaxlokk and Piraeus. Traffic is down by almost one million TEU from 10 years ago and a further decline seems inevitable.

Mediterranean ports face even tougher times ahead. A slow decline in transshipment — which currently accounts for more than one in four containers handled at ports around the world — appears to be under way, according to Neil Davidson, senior ports and terminals analyst at Drewry Shipping Consultants.

But Yilport has a successful history of growing volume in smaller ports and is just three slots short of meeting its ambition of making it into the top 10 global terminal container league by 2025. It attributed the 9.5 percent increase in 2017 volume to 4.3 million TEU to growth in Turkey and its three Nordic terminals — two in Sweden and one in Norway — which boosted traffic by 14 percent.

Yilport, which has a 24 percent stake in French ocean carrier CMA CGM, is boosting its Nordic business, striking an agreement last year with the western Swedish port of Gävle to build a new container terminal that will boost annual capacity to 600,000 TEU when it opens in the fourth quarter of 2020.

HHLA, Hamburg’s leading container terminal operator, is also eyeing acquisitions in smaller ports, as it looks to grow its traffic, which risks slower growth as its top rivals Antwerp and Rotterdam pull further ahead, due to the prolonged delay in deepening the Elbe River, the port’s access to the open sea. The company recently closed on the acquisition of Transiidikeskuse AS, the largest terminal operator in the Estonian port of Muuga.

HHLA’s first foreign acquisition since it bought into the HPC Ukraine terminal in Odessa back in 2005, is part of the port and logistics company’s target to achieve international growth, according to Angela Titzrath, chairwoman of its executive board. HHLA, which handled 7.2 million TEU in 2017, an 8.1 percent increase from 2016, plans to invest more than €1 billion  ($1.17 billion) over the next five years and has set up a process “that will allow us to continually select and evaluate potential value-adding acquisition targets.”

And while Piraeus climbs steadily up the European container rankings — thanks almost totally to the Greek port’s acquisition by China’s Cosco Shipping — the country’s second ranked hub, Thessaloniki, is set to boost traffic following the recent sale of a 67 percent stake to a consortium of Deutsche Invest, Terminal Link (which is 51 percent owned by French carrier CMA CGM), and Cyprus-based Belterra Investments, in an deal worth an overall €1.1 billion.

The new owners have agreed to an investment program to upgrade the port, which includes extending its container terminal by 440 meters (1,443 feet) with a depth of 16.5 meters enabling it to handle ships up to 14,000 TEU on direct services from East Asia. The port has a long way to go — traffic is expected to reach about 430,000 TEU this year — but there are opportunities to deepen its hinterland connections in southeast Europe.

The port of Liverpool got an unexpected publicity boost in July when the 2M Alliance temporarily switched its TA2 trans-Atlantic service from Felixstowe to avoid the congestion caused by teething problems at the UK’s top container hub. Maersk’s South American service, Colombia Express, will also start calling at Liverpool on its westbound leg, shipping exports to Newark. “As one of the largest UK wine importers, this is great news for our business. It means we’ll be able to ship more goods closer to our bottling, storage, and distribution facilities in the northwest , allowing us to maintain our reliable and cost-effective service for the benefit of our customers,” said Michael Forde, supply chain director of Manchester-based Kingsland Drinks.

Handling ships up to 8,500 TEU for 12 weeks is a major boost for the £400 million ($525 million) Liverpool 2 container terminal, which opened in 2016 and is currently being expanded as its owner, Peel Ports, seeks to boost the port’s UK container market share from around eight percent currently to 15 to 20 percent by luring traffic from the dominant southern ports: Felixstowe, London Gateway, and Southampton.

The diversion from Felixstowe “demonstrates the impact which our investment in Liverpool 2 has had in re-shaping UK logistics, and disrupting traditional approaches to shipping,” said Mark Whitworth, chief executive of Peel Ports, the UK’s second-largest port operator after Associated British Ports.

It’s not that easy for smaller ports to attract “local, hinterland containers” that are currently shipped through the top hubs, especially those in the Le Havre-Hamburg range. Rotterdam credited a “particularly sharp” increase in shortsea traffic to and from the Mediterranean as one of the drivers of the “spectacular” 10.9 percent rise in its 2017 traffic to a record 13.7 million TEU.

Shipping analysts are divided over the outcome of the north-south ports battle. A couple of years ago, Drewry Supply Chain Advisors said shippers importing goods into southern Germany from China would be better off using Mediterranean gateways rather than the traditional route through northern ports, which no longer held all the “trump cards” for containers.

While it was cheaper to ship cargo from Shanghai to southern Germany through Rotterdam and Hamburg than Koper, the Slovenian port’s three-day transit advantage made it a contender for shippers with time-sensitive cargo.

This contrasted with a claim by Panteia, a Dutch consultancy, that Europe’s northern terminals will remain a better option for shippers transporting containers to and from Asia than via southern ports such as Koper, Genoa, and Constanta, despite their shorter transit times, as governments seek to reduce the environmental impact of the supply chain. This is because northern ports handle megas-ships up to 20,000 TEU that have significantly lower carbon dioxide emissions per container than the smaller ships calling at Mediterranean Sea terminals.

Koper is the largest container port in the Adriatic, but it has a long way to go to match neighboring Mediterranean ports, with traffic rising to just short of 912,000 TEU in 2017 from just less than 844,000 TEU in 2016.

And Rotterdam could boost its share in certain southwest German markets by as much as 23 percent with new rail connections, according to a joint survey earlier this year of 30 shippers, hauliers, and freight forwarders by Contargo, one of Europe’s leading barge and rail operators, the Darmstadt Technical University, and the Port of Rotterdam Authority.

French ports have also failed to capitalize on Europe’s second-largest economy, after Germany, with a significant slice of the country’s container imports and exports passing through Antwerp and Rotterdam. Le Havre ranks 10th in the European port table although traffic surged more than 14 percent last year to 2.88 million TEU, which also included shipments through Rouen and Paris, and its second-largest container hub Marseille lags in 21st position, handling 1.36 million TEU in 2017.

However, French ports could capture more national traffic in the coming years with the government eyeing a national strategy to improve their competitiveness. Meanwhile, Le Havre plans to invest €500 million in several projects including €235 million to expand and upgrade its container facilities.

Containers aren’t, however, the be all and end all for European ports, especially those that have been squeezed out by bigger players in the Le Havre-Hamburg range.

Zeebrugge, Belgium’s second-largest port, has suffered a series of setbacks over the years, including the departure of top terminal operators, Singapore’s PSA International and Maersk’s APM Terminals, and the slump in traffic from 2.5 million TEU in 2011 to just over 1.5 million TEU last year. It can look forward to increased business with China’s Cosco Shipping Ports, a unit of Cosco Shipping, the world’s third-largest ocean carrier, becoming the major shareholder of the remaining terminal in November, along with CMA CGM acquiring a 10 percent stake in July. And it could potentially benefit from Antwerp soon facing a container capacity shortage, thanks to its surging traffic.

But the coastal port’s main focus is on boosting its vibrant roll-on, roll-off business, which faces a threat from the UK’s looming exit from the European Union and maintaining its position as one of the world’s top automobile ports, as the Trump administration threatens to slap tariffs of up to 25 percent on European car imports.

And containers aren’t the only measure of success on the waterfront. Amsterdam’s attempt to become a significant player in the business flopped a couple of decades ago, as its giant nearby neighbor Rotterdam bagged its potential customers. But it has steadily consolidated its position as Europe’s fourth-largest port in tonnage terms with a significant presence in the conventional cargo, breakbulk, and dry/wet bulk markets.

Still, containers shipping will continue to dominate industry news amid tightening links between carriers and terminals.