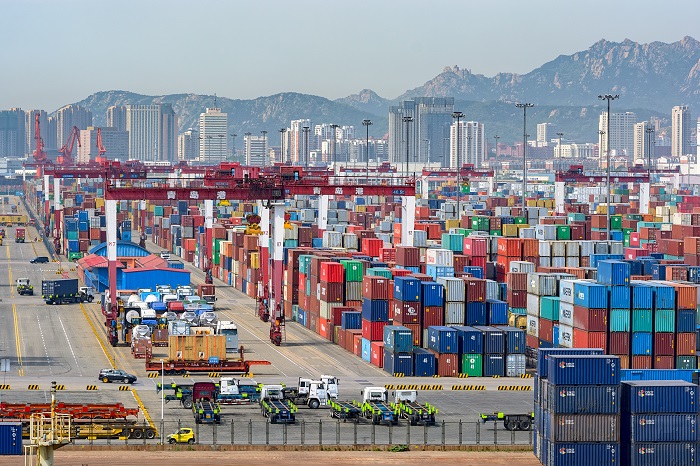 Cosco and CMPort are now the fifth- and sixth-largest container terminal operators in the world. Photo credit: Shutterstock.

Terminals with investments by China Merchants Port Holdings (CMPort) handled 102.9 million TEU in 2017, breaking the 100 million barrier for the first time, and representing a year over year rise of 7.7 percent in non-equity weighted throughput.

Domestic volumes comprise the majority of the throughput of both operators, but overseas volumes are growing as investments by the state-controlled companies in other world regions increase — driven by the foreign policy of China’s central government.

In the case of Cosco, the percentage volume contributed by overseas facilities was higher in 2017 than in 2016, despite very strong growth in containerized trade at mainland ports. Cosco’s overseas throughput rose to more than one-fifth its total non-equity-weighted throughput for the first time in 2017.

CMPort’s overseas volume contribution, including Hong Kong and Taiwan, was one-quarter of its total non-equity-weighted throughput. Overseas terminals at Colombo International Container Terminal in Sri Lanka and Lomé Container Terminal at Togo in West Africa were its top performing facilities in terms of volume growth last year, with y/y volumes up by 18.5 percent and 67.5 percent, respectively.

In 2017, both operators demonstrated the capability to pay a premium for port assets backed by Chinese banks offering Belt and Road project development loans with interest rates as low as 2 percent.

Cosco paid $228 million for a 51 percent stake in Spain’s Noatum Ports last year, which operates container terminals in Valencia and Bilbao, as well as the Conterail dry port in Madrid and Noatum Rail Terminal in Zaragoza.

CMPort’s overseas acquisitions in 2017 included a 90 percent stake in TCP Participações, the operator of the Port of Paranaguá in Brazil, the second-largest container terminal in the country. CMPort also acquired a majority stake in the controversial Hambantota port development project in Sri Lanka last year and, with the acquisition of the Shantou Port Group, played its part in the ongoing consolidation of the domestic China ports sector.

Analysis by Drewry Maritime Research indicates that Cosco and CMPort are now the fifth- and sixth-largest container terminal operators in the world by equity TEU throughput.

IHS Markit’s latest Maritime & Trade forecast projects containerized trade will expand by 4.9 percent in 2018. The longer-term forecast is for growth of about 4.8 percent through 2025.

Given that container terminal throughput volumes are higher than trade volumes, due to transhipment traffic and movement of empties, Drewry’s latest, five-year global container port demand forecast is less bullish, at 4.3 percent per annum.

The London-based research house expects global container terminal capacity to grow by about 2.7% during the period, resulting in generally higher levels of utilization.