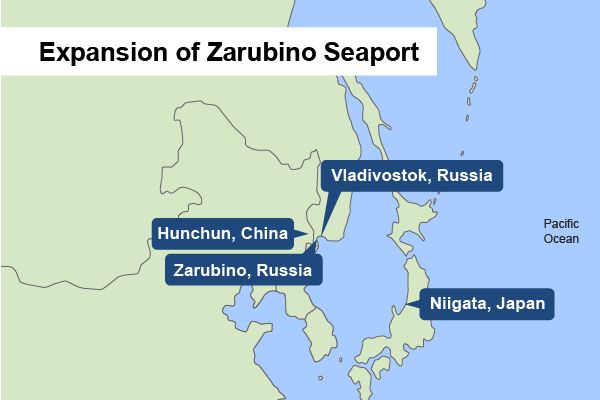 Working with the Chinese government, Russian port logistics company Summa Group plans to complete a $100 million expansion of the Russian port of Zarubino in 2018, offering shippers better access to and from Northeast Asia.

Located in the west side to Vladivostok, the largest ice-free commercial port in Russia, Zarubino port is much closer to the Russian-Chinese border, as it's only 43 miles to Hunchun, a city of Jilin province. The strategic location of the Zarubino port has being highlighted since last year, especially after service on the Hunchun-Makhalino Railway was restored this spring. The 1,000-kilometer rail line links Hunchun and Zarubino port, providing the shortest route between Northeast China and far eastern Russia.

The partnership between Summa Group, a shareholder of Russia’s main container line, FESCO, and the Chinese government highlights the growing economic cooperation between the two countries. Russia, which faces severe sanctions from Western countries, in May signed a $400 billion energy deal with China, its second-largest trade partner.

By expanding from the facility by about 380 acres to 630 acres, Zarubino port will be able to handle up to 100 million tons of cargo per year in 2018, up to 60 percent of which will be transiting Chinese cargo. The port, with nearly 5,000 miles of berth, will have 19 terminals designed for container, bulk grain, roll-on, roll-off and passenger traffic. The seaport is expected to handle 25 million tons of general cargo, 1.5 million units of rolling cargoes and 2 million containers annually, according to Summa Group.

Meanwhile, the Russian company has taken its first step in developing back-up land for logistics in the Hunchun Border Economic Cooperation Zone. The free trade zone includes an export-processing zone and a China-Russia trade zone. The new logistics distribution center will further support the freight shipping from Northeast China to Zarubino port.

This isn't the first time that the seaport in Trinity Bay has garnered attention from the shipping industry. Back to 1991, the United Nations Development Program launched the Greater Tumen Initiative (GTI), an effort to develop infrastructure in the region spanning Siberia, Japan, North Korea, South Korea, Mongolia and China.  GTI now recommends modernizing the Zarubino port.

Japan's Niigatta Prefecture, which is on the northwest coast of the Sea of Japan, found that shipping cargo from Niigata to Jilin province through Zarubino usually takes four to six days. That's less than half the time it would take to ship the goods via Dalian port.

The resumption of the rail service is also a part of GTI effort. After nine years of halted service, six containers of bottled mineral water were shipped from Jilin province to South Korea via the Hunchun-Makhalino rail line in May. The line has an annual capacity of 3 million tons of cargo.

Cosco, China's largest container line, doesn't expecting to change its Northeast Asia route to include Zarubino in the short-term. “Whether the route will be shorten or not, it’s up to company’s next strategy meeting,” a Cosco representative said.

A source from Jilin Grain Corp. said it’s still unclear what role Zarubino port would play in grain exports, as most Chinese exports from the region are shipped out of Dalian port to South Korea and Japan. The outlook of grain trade is not as promising as exporter expected, according to the source. Still, shipping via Zarubino might lower the high traffic volume of Dalian port, the busiest seaport of Bohai Economic Rim.