The world’s 35th largest container port, the Port of Tokyo handled 4.57 million TEUs in 2018, making it one of the largest Japanese seaports and one of the largest seaports in the Pacific Ocean basin. Its various container terminals supplied an area of 1,504,718 square meters with a total number of 15 berths and a quay length of 4,479 metres. These included:

-- Aomi container terminal, which provided five berths with an area of 479,079 square meters and a quay length of 1,570 meters;

Other major terminals were two foodstuff terminals, for marine products and foods (five berths with a quay length of 1,060 metres and a storage area of 359,000 square meters), five terminals for general cargo (bulk cargo, timber, construction materials, log handling), storage for 200,000 cubic meters of timber and storage for 210,000 tonnes of logs.

The State of Intermodal
END_OF_DOCUMENT_TOKEN_TO_BE_REPLACED 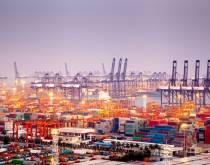 08 Jan 2020
A jump in pilotage fees at China’s Yantian International Container Terminal come as Hong Kong is already under pressure to maintain its position as one of the world’s top 10 container ports amid a continual shift of volumes to nearby Chinese ports and some shift in manufacturing from China to southeast Asian nations.
MORE »

China looks to restructure Pearl River Delta ports
28 May 2019
A desire by the Chinese government to stop wasteful duplication of resources is one factor behind a move to restructure three gateway ports in southern mainland China and Hong Kong.

Slideshow: China's ports shine in Top 10 global rankings
24 Aug 2018
China’s ports were the star performers in the 2018 Top 50 Global Container Port rankings, with seven ports among the Top 10, in terms of total TEU handled in 2017.

Top 50 Container Ports in 2016: Shanghai tightens grip on crown
10 Aug 2017
It is Shanghai’s seventh year atop the rankings.