The largest port in Northern China and the main maritime gateway to Beijing, The Port of Tianjin is one of the primary logistics and shipping hub of North China. It is located on the western shore of the Bohai Bay, on the estuary of the Haihe River, 170 km southeast of Beijing and 60 km east of Tianjin city. The largest man-made port in mainland China, and one of the largest in the world, it was the ninth-largest container port in the world in 2018. In 2019, the port reported total container throughput of 15.97 million TEUs, an increase of 6.2 percent over 2018. In 2019, the port traded with more than 600 ports in some 180 countries and territories around the world. It was served by over 115 regular container lines, including all of the world’s top 20 liners.

The Port of Tianjin is part of the Binhai New Area district of Tianjin Municipality, the main special economic zone of northern China. It lies directly east of the Tianjin Economic-Technological Development Area (TEDA), one of China’s first national economic and technological development zones. After years of development, TEDA has expanded from the original 33 square kilometers to more than 400 square kilometers, and has formed a new development pattern of “one zone with ten parks” by developing ten parks of clear industrial orientation and development direction. TEDA was once rated as “China’s Most Dynamic Region” by the United Nations Industrial Development Organization (UNIDO). 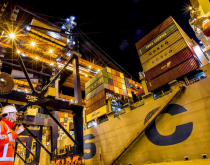 14 Apr 2021
The surge of ships caught up in the Suez Canal blockage are arriving in North Europe and the first wave has hit Singapore, but so far there have been no significant delays reported.
MORE »

Coming capacity wave threatens near-term carrier profitability: analysts
14 Apr 2021
New ship orders have soared in the past few months, but there are rumblings of unease over the supply-demand balance once the vessels enter service in a couple of years.

Carriers warn of looming post-Suez China box shortage
09 Apr 2021
Suez delays and congestion in ports across Europe are slowing the return of equipment to Asia where it is needed for exports, leading carriers to advise shippers to expect container shortages in the coming weeks.

Delays, congestion in South Florida threaten US–LatAm perishables trade
09 Apr 2021
Although trade between the US and Latin America has been spared the severe disruptions seen on the US West Coast, sources say PortMiami has seen vessel unloading times spike because of ships arriving one to two days late.

US retailers signal no import let up through summer
07 Apr 2021
Retailers predict US imports will continue to be at record or near-record levels at least through August as consumers have plenty of cash to spend on merchandise.

Port NOLA funds cold storage site to boost ag export capacity
07 Apr 2021
The Port of New Orleans has become a part investor, along with developer Lineage Logistics and the state of Louisiana, in a nearby cold storage warehouse that will serve the state’s poultry exporters.

Maersk welcomes pressure to hasten decarbonization moves
07 Apr 2021
Maersk is feeling pressure from customers and investors to decarbonize its operations, but the carrier says that pressure will bring the transparency needed to help accelerate its drive for carbon neutrality.