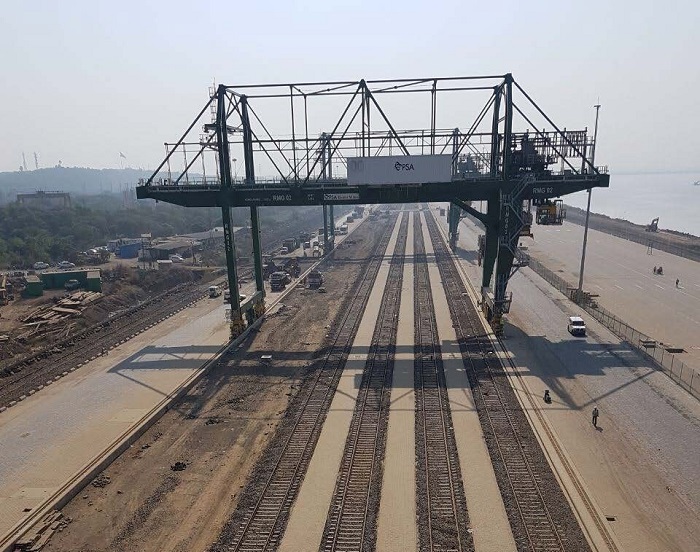 Although Jawaharlal Nehru Port Trust (JNPT) has thus far been unable to make any headway in its road-to-rail freight conversion drive, despite various proactive measures, a strategic collaboration deal PSA International set up this week with state-owned rail operator Container Corporation of India (Concor) for its new terminal — slated to open soon — could turn things around for India’s busiest container gateway.

Under the agreement, Concor will connect Bharat Mumbai Container Terminals (BMCT) to its rail transhipment hubs (RTHs) at Kathuwas, near Delhi, and Jakhwada, near Ahmedabad, with dedicated shuttle trains that authorities believe will drive significant freight gains for JNPT and logistics cost benefits for northwest hinterland shippers.

“The speedy transshipment at Concor’s RTHs will ensure boxes reach their destinations on time. The end result is that shipping lines using BMCT’s rail terminal can enjoy a higher service level overall at a much more competitive cost,” PSA India said in a trade advisory.

The company said the aggregation of containers destined for northwest inland points onto a single train at BMCT, aided by priority handling arrangements, will improve productivity as the port works to scale down cargo dwell times.

BMCT is touted as having the most sophisticated rail infrastructure at Indian ports, featuring on-dock facilities in sync with Indian Railways’ under-construction Dedicated Freight Corridor (DFC) requirements and are capable of handling 1.5 kilometer (0.9 mile) trains with a loading capacity of 360 TEU.

Other special arrangements under the deal include allowing BMCT to use Concor’s Dronagiri Rail Terminal in JNPT for storage of overstaying containers booked under the direct port delivery program and offering empty container repositioning services to shipping lines, a first of its kind operation at JNPT.

“The percentage of rail cargoes handled at JNPT, despite the benefits of rail versus road, has continued to decline to a figure of 12 percent recently. By working together to provide superior service levels and offerings via our RTHs, we have no doubt that rail percentage in JNPT will see a major upswing with the commissioning of BMCT and we aim to see 35 percent of volumes at BMCT handled by rail once the DFC is completed,” Concor chairman and managing director V. Kalyana Rama said in a statement.

BMCT CEO Suresh Amirapu expects the BMCT-Concor collaboration to flourish upon completion of the DFC, which is designed to link northern hinterlands to JNPT.

Shifting more loads to rails is a vital part of New Delhi’s ongoing efforts to shore up supply chain efficiency, but JNPT has yet to make a steady improvement on that front.  To illustrate, a JOC.com analysis shows JNPT’s intermodal lifts during November fell to 14.5 percent from 16 percent in October, after hitting a high of 17 percent in August. As a result, its rail traffic share in the April-to-November period slowed to a long-term trend of 15 percent.

Built at a cost of Rs. 4,719 crore ($736 million), BMCT’s first phase includes a berth line of 1,000 meters (3,281 feet) and a capacity of 2.4 million TEU per year. At full build-out, the terminal will have a 6,562 foot quay, a 494 acre storage yard, 24 quay cranes, and an annual capacity of 4.8 million TEU. The company recently also signed a deal with domestic multi-modal logistics provider PNP Maritime Services to operate a regular container-on-barge service between JNPT and Dharamtar Port.

JNPT currently encompasses a port-owned terminal, two facilities operated by DP World, and one by APM Terminals. Those rail improvements are critical for the port as the battle for market share on India's west coast heats up with massive capacity building and aggressive shipper outreach efforts by private rival Mundra.

“While the recent capacity creation in these regions is backed by prediction of strong demand growth, increase in exim [export-import] cargo movement would be gradual and in the interim, terminals could witness pressure on volumes. Terminals with short to medium term contracts with container lines could partly address the volume risk, while pressure on realization and margins is imminent as the lines drive a hard bargain on rates,” domestic market research and credit rating firm ICRA stated in an analysis released Wednesday.

New port data collected by JOC.com reflect that growth pressure, as Mundra had a much-lower-than-usual 10 percent increase in the first half, versus a 29 percent year-over-year gain during April to September 2016. JNPT’s pace of growth has also slowed, with April-to-November volume up 5.8 percent, after a solid start to the fiscal year.