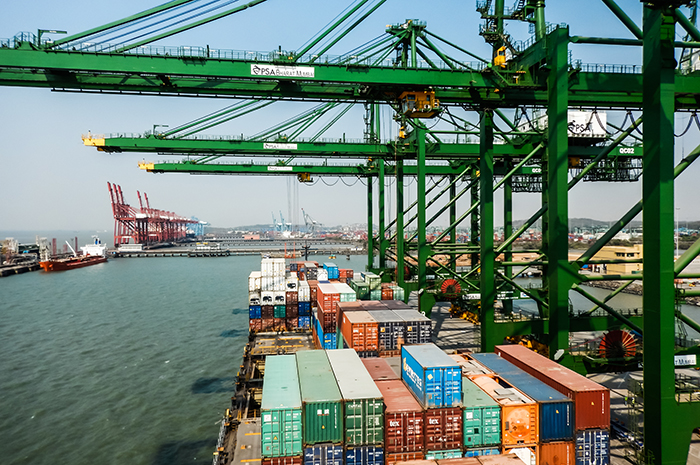 With the completion of contracted quay crane deployments and a likely end to a long simmering inter-terminal rail issue, PSA International’s new Indian terminal — touted as the single-largest foreign direct investment in the emerging market economy — has positioned itself for accelerated growth.

PSA (India) officials told JOC.com the last batch of three super-post Panamax ship-to-shore cranes under Phase I development plans arrived at the terminal in April, bringing the facility to full operating capacity. With a total of 12 quay cranes, each capable of handling large vessels of up to 22 containers wide, and a berth line of 1,000 meters, BMCT is now able to service multiple mega-ships simultaneously.

In addition, the terminal features a 90-hectare (222 acres) storage yard with 9,336 ground slots, four rail-mounted gantry cranes, and 36 rubber-tire gantry cranes. Singapore-based PSA is preparing to begin Phase II construction of the same scale with a targeted completion by the end of 2022.

The addition of a total 4.8 million TEU in annual container handling capacity will mean increased competitive pressures for terminals in the region already burdened by an overhang of excess supply built up in recent years in anticipation of high demand growth. According to a JOC.com analysis, ports in Western India have a combined existing capacity of about 17.5 million TEU annually, well short of the total 11.1 million TEU in volume passing through their terminals last year.

Because BMCT is expected to attract more calls from larger ships, PSA is also looking to streamline and speed up cargo movement in and out of the terminal via mixed trains — a shared port logistics system that caused “teething issues” during the facility’s first few weeks in operation.

Following investigations by India’s anti-trust regulator into charges that terminals operated by DP World and APM Terminals sought to impose additional fees on BMCT export/import containers handled via mixed trains connecting at their rail yards, APM has reportedly stopped this practice, but it remains to be seen whether DP World Nhava Sheva, which has two terminals at JNPT, will soften its stance. Officials from the three terminal operators were not immediately available for comment on the issue.

Under the inter-terminal program, intermodal rail providers can transport containers to and from inland container depots (ICDs) for multiple terminals and discharge or load all such containers at one terminal. A vast majority of trains serving JNPT terminals run on a “mixed” basis, given the limited infrastructure at the public harbor, making unfettered access that much more important for BMCT.

Despite these complications, volume has been on a steady growth path at BMCT, with fiscal year 2018-2019 throughput reaching 520,126 TEU.

Once Indian Railways’ dedicated freight corridor connector is complete, BMCT’s on-dock rail infrastructure will carry containers to and from the terminal via 360-TEU trains on a regular basis. Even as inter-terminal skirmishes begin to dissipate, industry observers believe that an effective, long-term solution to portwide rail issues will essentially hinge on when BMCT is able to run regular dedicated trains through its on-dock intermodal systems at full speed. Currently, dedicated trains run to and from BMCT at sporadic intervals.

In total, JNPT handles more than half of India’s containerized freight passing through major public ports, with fiscal 2018-2019 volume hitting an all-time high of 5.1 million TEU.