At the port of Hong Kong, the deployment of larger vessels and larger alliances has produced a critical increase in the number of inter-terminal transfers, resulting in higher charges to shipping lines; extra handling time for shipments; and an increased burden on the port’s resources and roads.

The State of Intermodal
END_OF_DOCUMENT_TOKEN_TO_BE_REPLACED 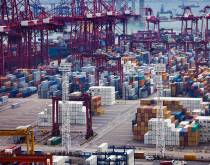 06 Jan 2020
Dockworker and other logistics-related labor unions in Hong Kong are looking to stem a decline in membership that began after a 2013 strike that disrupted operations at Hutchison Port Holdings’ Hongkong International Terminals (HIT).
MORE »

Delay in Hong Kong air draft decision frustrates lines
03 Jun 2019
Container lines have been waiting five years for the Chinese government to resolve a problem involving an air draft restriction at a key bridge in Hong Kong, and the delay is now costing the port business.

China looks to restructure Pearl River Delta ports
28 May 2019
A desire by the Chinese government to stop wasteful duplication of resources is one factor behind a move to restructure three gateway ports in southern mainland China and Hong Kong.

HK logistics firms eye South China FTZ
21 May 2019
Shipper interest in a free trade zone in Zhuhai, China, is being driven by a shortage of logistics space and rocketing rental prices across the Pearl River in Hong Kong.

Hong Kong block exemption troubles shippers, carriers
09 Aug 2017
It took the Competition Commission of Hong Kong almost two years to grant liners a block exemption from anti-trust laws, but the exemption order has been greeted with grumbling by shippers and carriers.

HPHT revenue, profit drop despite rising volume
20 Jul 2017
Hutchison said it continues to be impacted by ongoing structural consolidation within the container shipping industry and a consequent rationalization of services.

Hong Kong bridge concerns to grow with ship sizes
19 May 2017
“Anything that puts restrictions on the largest vessels coming into Hong Kong impacts Hong Kong’s competitiveness.”

HPH Trust plays down new alliance impacts
25 Apr 2017
There are signs potential negative effects of the new alliances on transshipment and tariffs may be overstated, according to the CEO of HPH Trust.

No plans to relax Chinese cabotage laws
16 Feb 2017
A senior source close the matter told JOC.com that the government of Hong Kong had made its concerns known over such changes to Beijing.

Chinese ports face wide array of changes, challenges
30 Dec 2016
Reliance on growth from an ever-expanding pie of box volumes growing in the high single or double-digits is a thing of the past for Chinese ports.

Chinese cabotage change could cost Hong Kong port
14 Nov 2016
Hong Kong received a timely and stark reminder of the precarious position of its container port via a study from one of its main private business schools.

Shippers seek legal advice over HIT's high Hanjin box release fees
08 Sep 2016
The Hong Kong Shippers Council is putting pressure on the government to convince HIT to drop its high Hanjin container release charges or it will launch a court action against the terminal.

China port volumes rise following flat first half
23 Aug 2016
Container throughput at China’s main ports rebounded in July after a poor first half of the year.

Container alliances pose opportunities and risks to top transshipment hubs
08 Aug 2016
The trend toward fewer services deploying larger vessels with multiple carriers pooling cargo will create winners and losers with the successful terminal operators most likely boasting strong connections to the dominant members of the alliances.

Back-up land a priority, terminals urge hesitant HK government
20 Jul 2016
The shipping industry is anxiously awaiting efforts by the Hong Kong government to help the territory's port cope with a number of issues it is facing.

Hong Kong moves to save struggling port
26 Apr 2016
The first meeting of the newly formed Hong Kong Maritime & Port Board will take place early next month. Chaired by the secretary for Transport & Housing, the body is an amalgam of the old Maritime Industry Council and the Port Development Council. It is designed to deliver more effective governance and strategy over the development of the territory’s port and maritime sector.