The world’s fifth-largest container port in 20018, with 21.8 million TEUs, the Port of Guangzhou is the main seaport of Guangzhou city, Guangdong province, China. As far back as the Qin Dynasty (221 to 206 BC), Guangzhou was an important port; a key link in the Silk Road on the Sea and one of China's busiest ports during the Ming and Qing dynasties. Guangzhou is situated at the intersection of the three most important rivers of Dongjiang, Xijiang and Beijiang. The main port of focus in the Pearl River Delta Region, its harbor area extends along the Pearl River coast and water areas in the cities of Guangzhou, Dongguan, Zhongshan, Shenzhen and Zhuhai.

Nowadays, maritime trade from Guangzhou reaches over 300 ports in more than 80 countries and districts worldwide. Guangzhou serves as the most important economic and transportation center for the Pearl River Delta region and Guangdong province. It is also a vital transport hub for industries located in neighboring provinces such as Guangxi, Yunnan, Guizhou, Sichuan, Hunan, Hubei and Jiangxi.

The Port of Guangzhou comprises 4,600 berths, 133 buoys and 2,359 anchorages, each of 1,000 tonnage class. The Port of Guangzhou handles a range of activities which include loading and discharging, storage, bonded warehousing, container cargo services. Many agricultural, industrial and manufactured products are shipped through the port which include oil, coal, grain, chemical fertilizer, steel, ore and automobiles.

The Port of Nansha, the deepwater port of the Port of Guangzhou, contributes more than 70% of the total cargo volume in China’s Port of Guangzhou.  Nansha Terminal operates more than fifteen 150,000-ton berths, with a total quay length 5,728 meters. It is equipped with more than 60 cranes, with the ability to handle nearly two dozen rows of containers. Nansha Terminal is capable of accommodating such Mega Vessels as CMA-CGM’s Ben Franklin.

Navigating the Winding Roads This Peak Season & Beyond
END_OF_DOCUMENT_TOKEN_TO_BE_REPLACED 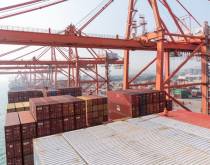 17 Jun 2021
Expansion into China is another piece of progress for TradeLens, the visibility and shipment data platform co-developed by Maersk and IBM.
MORE »

Sponsored Video: Cool cargo, infrastructure fueling China's Port of Nansha
05 Nov 2019
Sponsored: Guangzhou Ports (Europe) CEO Johannes Nanninga on the cargo flow transformations happening in South China and the rise of the Port of Nansha as the west side of the Pearl River Delta strengthens as a manufacturing and warehousing hub.

Nansha (Guangzhou) attracts first US East Coast direct service
16 Sep 2019
The US East Coast service, branded TP17 by Maersk and America by MSC, adds to the port of Nansha’s four weekly services to the US West Coast.

Sponsored: One Belt, One Road will transform China's shipping landscape by 2030
12 Aug 2019
Sponsored: China’s One Belt, One Road initiative has the potential to "resettle the landscape,” according to John Painter, president and CEO of Guangzhou Port America. At the JOC's 2019 TPM Conference, he discussed its impact on volumes, Guangzhou’s near-term expansion programs, and the tariff question.

Sponsored Video: The road from Nansha to Europe
06 Oct 2017
Sponsored: Johannes Nanninga, CEO of Guangzhou Port (Europe) BV, on trends in China, including growth of imports and manufacturing moving farther inland and west.

Guangzhou dredging sign of stronger Pearl River competition
03 Oct 2016
A major dredging project at the port of Guangzhou signals its intentions to capture Pearl River Delta cargo currently traveling to other competitors in the region.

Volume still rising at China’s top ports
22 Dec 2015
Throughput at China’s top 20 container ports rose 4 percent in the first 11 months of the year compared to 2014 as most of the mainland terminals continue to grow volumes despite slowing trade putting the brakes on exports.

China ports grow on back of robust US trade
21 Jan 2015
Total container throughput at China’s top 20 ports reached 175 million TEUs in 2014, an increase of 5.3 percent over the previous year as solid exports to the U.S. helped drive up the cargo numbers.