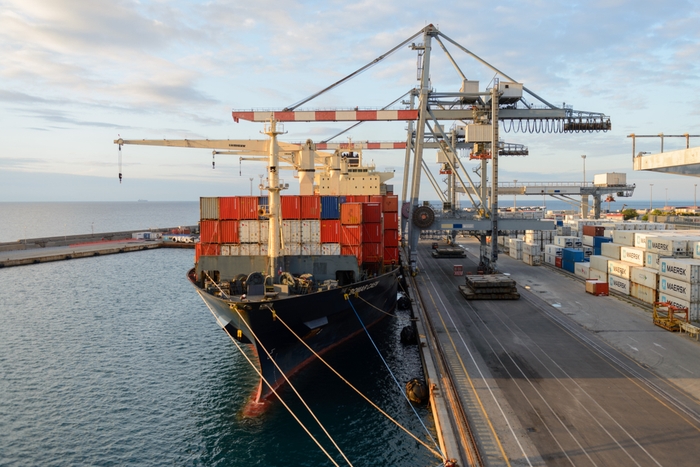 The Northern Italy port of Vado Ligure, near Genoa, will have a capacity of more than 1 million TEU when the new joint venture terminal with Cosco that opened Dec. 12 is fully operational. Photo credit: Shutterstock.com.

It also gives Cosco Shipping another foothold in the Mediterranean, allowing the Chinese state-owned company to add to its growing portfolio in Europe as part of Beijing’s Belt and Road trade expansion strategy.

Over the past few years, Cosco Shipping and fellow state-owned China Merchants Port Holdings have acquired stakes in a series of European ports, with those in the Mediterranean comprising Piraeus, where Cosco holds a controlling share; Marsaxlokk in Malta; Valencia in Spain; Marseille in France; Port Said in Egypt; and Istanbul in Turkey.

Vado Gateway is in the northern Italian town of Vado Ligure and falls under the Ports of Genoa and the Western Ligurian Sea Port Authority, from which APMT has a concession to operate the terminal for 50 years. APMT holds 50.1 percent of the terminal, Cosco has 40 percent, and Qingdao Ports holds 9.9 percent.

The Vado Ligure port system is actually two integrated terminals — Vado Gateway and a reefer terminal, both run by APMT. Once fully operational by the end of 2020, APMT said in a statement it expects the Vado Gateway to handle 900,000 TEU a year in addition to the 250,000 TEU a year through the adjacent reefer terminal. Vado Ligure is the largest fruit logistics hub in the Mediterranean.

From February 2020, vessels on Maersk’s Med-Middle East-India ME2 service, and the Med-North America MMX service, will call at Vado Gateway.

A quay level depth of 17.25 meters (56.5 feet) will allow the terminal to handle the largest container vessels without any limitations. The full 700 metre (765 yards) quay will be operational from July 2020.

With much of the volume handled by Vado Gateway comprising import-export cargo, a key measure of success will be the efficiency of the terminal’s landside connections with Europe’s hinterland. Rail links from the Med to the markets of Central Europe have always been a limiting factor for southern European port volume, with a lack of infrastructure spending leaving railway systems creaking under the rising demand.

However, taking advantage of rail infrastructure that is under development in Vado Ligure, APMT has set itself a target of moving 40 percent of containers arriving or departing from Vado Gateway by rail. Both the reefer and dry terminal are linked to an off-dock rail facility that has four lanes of 492 yards and a capacity for 14 trains per day.

APMT said four to five trains connect Vado with several intermodal hubs in northern Italy, such as Lombardy, Piedmont, Veneto, Emilia-Romagna, Milano, and Padova, as well as opening connections with central and northern European markets in Switzerland, Germany, and France.