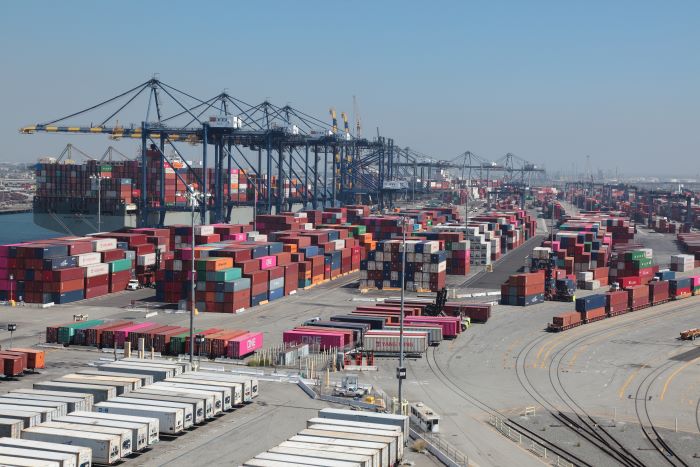 A rough estimate was that more than 20 ships were supposed to have docked at Los Angeles and Long Beach marine terminals by the end of the year, but remained at anchorage positions due to backups at the ports. Photo credit: Shutterstock.com.

As the end of 2020 approached and ships started to back up at anchor off the ports of Los Angeles and Long Beach, concern started to stir among members of the trade community — and not just due to growing cargo delays.

The issue was that at midnight on Dec. 31 goods on ships at anchor would be subjected to hundreds of millions of dollars in higher tariffs if the ships had not officially arrived in the US by that point.

A ship riding at anchor off the coast, even if within sight of land, would not automatically be considered as “arrived” by Customs and Border Protection (CBP), meaning that importers couldn’t file entries or receive release notices. And if the ship hadn’t “arrived” by the hour in question, a number of tariff programs were due to expire that could mean more than half a billion dollars in additional duties assessed on the cargo aboard the ships.

A rough estimate was that more than 20 ships — containing a total of $4.5 billion worth of cargo — were supposed to have docked at Los Angeles and Long Beach marine terminals by the end of the year, but remained at anchorage positions due to the backup at the ports as a result of the COVID-19-led import surge. If they were still considered to be in transit by CBP, potentially up to $600 million in additional duty would be owed, although a more precise calculation wasn’t made.

As November turned into December, a diverse coalition of trade community representatives — including the two port authorities, the Los Angeles Customs Brokers and Freight Forwarders Association, and the Pacific Merchant Shipping Association — began sounding the alarm.

The higher duties would be imposed due to expiration of the Generalized System of Preferences which allows goods from developing countries to enter duty-free, expiration of Section 301 duty exemptions on goods from China, and expiration of tariff reductions under the miscellaneous trade bill which applies to parts and components versus finished goods.

The concern triggered a whirlwind series of conversations with officials at CBP, which ultimately resulted in a determination by the agency that the anchorage positions occupied by the 20 ships qualified them as having arrived without having to actually dock at the ports, thus eliminating the worries about additional tariffs.

“It became a fire drill,” said David Libatique, deputy executive director at the Port of Los Angeles. “We’ve been experiencing a huge surge of import cargo, so the customs brokers, the [National Retail Federation], [the Agriculture Transportation Coalition], and others raised the very real concern that aboard these ships at anchor there will be a lot of cargo subject to increased tariffs and duties as of midnight on Jan. 1.”

“Our plea to CBP was ‘can you help us with this?,’ because we want to help a lot of American businesses and consumers avoid increased prices,” he added. “We estimated a lot of cargo could be left in the lurch if we don’t deal with this quickly. CBP responded very quickly and were very helpful.”

The effort required a delving into regulations and maps and at one point triggered a call to the Marine Exchange of Southern California to determine if ships’ anchorage positions could actually be moved if it were determined that the ships were outside of official port limits, although that step ultimately wasn’t required.

“The ports approached the Los Angeles Customs Brokers and Freight Forwarders Association and they asked us what could be done and we looked at the regulations and there was one that talked about ships that could be considered ‘arrived’ once they are within the port limits,” said Daniel Meylor, director of customs administration and  compliance with Carmichael International Service.

“CBP went back into history with the ports and looked at the maps,” Meylor said. “What they found is that there was an area right outside the breakwater that should have been included as within the limits. This allowed the 20 ships that could not get through the breakwater to the berth to be moored in that area and they could be considered arrived.”

“The San Pedro Bay ports and our partners came together to help our shippers,” said Noel Hacegaba, deputy executive director at the Port of Long Beach.

“With the new tariffs only days away from implementation, the Port of Long Beach worked with the Port of Los Angeles, US Customs and Border Protection, Marine Exchange of Southern California, port pilots, and ocean carriers to ensure that vessels that were scheduled to arrive prior to December 31 and were within three nautical miles of the port complex were not subject to the new tariffs,” Hacegaba said.