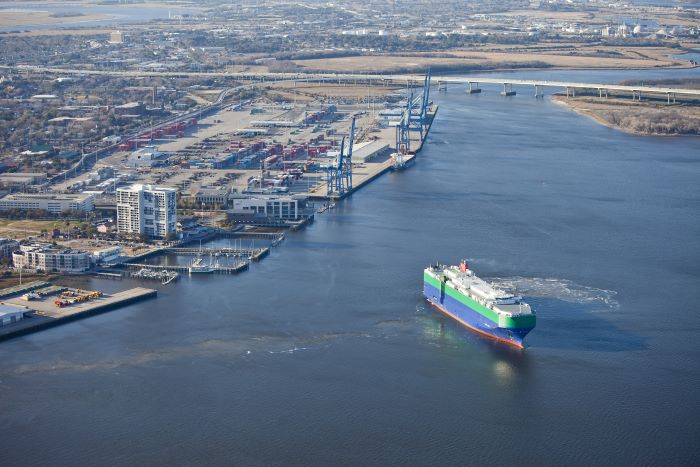 Charleston handled 1.085 million TEU in combined imports and exports in the first half of the year, up 5.5 percent from the year-ago period. Photo credit: Shutterstock.com.

The South Carolina Ports Authority on Monday outlined a vision to handle 19,000 TEU container ships through new and larger cranes, better use of land, deeper harbors, and a new container terminal opening in 2021.

The port will spend about $1.7 billion to improve the Wando Welch Terminal and open the new Hugh K. Leatherman Sr. Terminal, which would be the third terminal in the Port of Charleston. The inner harbor will also be deepened to 52 feet during mean low tide. The port needs to upgrade facilities after handling 2.4 million TEU in fiscal year 2019, up 8.8 percent from the prior year.

“S.C. Ports continues to build on our unprecedented growth and exceptional operations,” Port authority CEO Jim Newsome said in the annual state of the port address.

Newsome has said investing in the future is vital for Charleston to remain a top 10 US port that is responsible for one out of every 10 jobs in South Carolina and 10 percent of the state’s gross domestic product (GDP). Charleston handled 1.085 million TEU in combined imports and exports in the first half of the year, up 5.5 percent from the year-ago period, according to PIERS, a sister company of JOC.com within IHS Markit.

With three berths in Wando and one in the new Leatherman Terminal, the South Carolina Ports Authority (SCPA) will be able to handle four 14,000 TEU ships at once, or one vessel as large as 19,000 TEU, by 2021.

The SCPA took possession of three ZPMC ship-to-shore cranes of 155 feet of lift height last week. The equipment is being assembled and commissioned behind the Wando Welch wharf and should be available to use early next year.

The Wando Terminal currently has 12 ship-to-shore cranes. Eight have 155 feet of lift height, while the other four only lift to 115 feet. The three new cranes will replace the smaller ones, which will be sent from Wando to the North Charleston Terminal, which handles smaller vessels.

“These modern cranes are incredibly tall and have a wider reach, enabling crane operators to seamlessly move containers back and forth on 14,000-TEU-and-above vessels,” SCPA COO Barbara Melvin said. “Bigger cranes are part of our strategy to ensure we run efficient operations and remain competitive in the era of big ships.”

The Wando facility will have 15 large cranes by 2021. The Leatherman Terminal, due to open in 2021, will have five cranes in one berth capable of lifting 169 feet.

To handle the additional cargo, SCPA is increasing the number of containers it can handle inside the Wando Terminal. Container yard operations are being converted from a manual picking system to rubber-tired gantry cranes (RTGs). Newsome said the 60-plus RTGs are more efficient and allow containers to be stacked tighter than before, which should increase capacity by 700,000 TEU to 2.4 million TEU annually.

The biggest challenge will be to maintain the 45-minute average turn time while handling simultaneous 14,000-TEU vessels, or a single 19,000-TEU vessel. The SCPA is spending $450 million on the Wando upgrades.

Phase one of the Leatherman terminal will open in 2021 with 700,000 TEU capacity using one berth. Phase two will increase capacity to 1.5 million TEU with an additional berth by 2026. The final phase will raise the annual throughput to 2.4 million TEU by 2032 with another berth. SCPA will spend a total of $1.5 billion on the project over the next 13 years.

There will also be an intermodal container transfer facility near Leatherman connected by a private access road. There are no on-dock rail facilities in the Wando Terminal, so the port must employ local drayage companies to shuttle containers from Mount Pleasant to either the CSX Transportation or Norfolk Southern Railway facilities in North Charleston.

With an intermodal facility near Leatherman, a barge service will be set up to shuttle containers between terminals to be placed on trains.