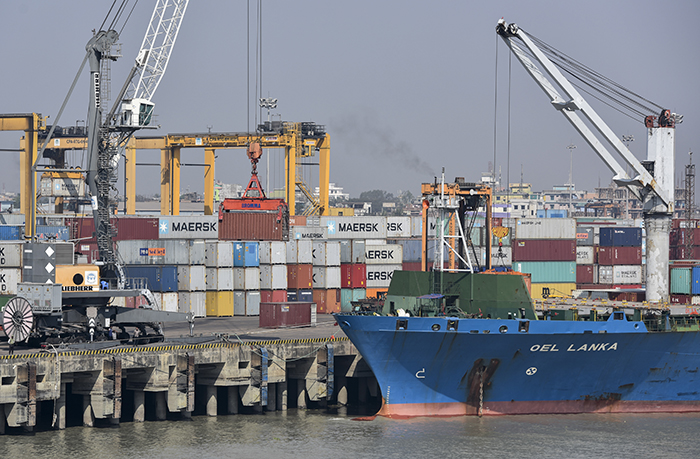 All eight of the port of Chittagong’s 40,000-square-meter less-than-containerload (LCL) cargo storage facilities are at full capacity and another 120 containers have yet to be unpacked. Photo credit: Shutterstock.com.

Shippers using the port of Chittagong are being hit with new handling charges at inland container depots (ICDs) at the same time congestion has returned to the port yard.

Starting April 1, 18 privately owned ICDs will hike packing fees by nearly 25 percent, citing increased operational costs. The Bangladesh Inland Container Depot Association (BICDA) said its members will raise the charge for stuffing an outbound TEU from $43 to $54. For an FEU, the cost will increase from $57 to $71.

The Bangladesh Shipping Agents Association (BSAA) is protesting the decision, arguing the fee hike will have an adverse effect on the country’s export-import sector and its consumers.

“Enhancement of off-docks costs will primarily be borne by the consignees/exporters, but [the] ultimate impact on costs will be on consumers’ shoulders, which will cause an adverse effect on the price index and country’s economy,” BSAA senior vice president Syed Mohammed Arif wrote in a letter to the Bangladesh Ministry of Shipping. He contends such fees can only be raised if they are fixed by the government tariff committee and subsequently approved by the shipping ministry.

BICDA secretary Ruhul Amin Sikder told JOC.com depot owners had been angling for an even larger 42 percent fee increase to meet help offset rising operational costs. But in April 2016, after receiving assurances from the government that it would conduct a further review of charges after one year, the depot owners agreed to a 20 percent hike.

“Almost three years have gone by since the last review of the charges, but the ICDs are yet to get their due cost-covering 22 percent increase in their charges and are struggling hard to make ends meet,” Sikder said.

Thanks to the deployment of additional cargo handling equipment, Chittagong port in November was able to move past persistent ship congestion and reduce the backlog of containers in its storage yard.

Since January, however, less-than-containerload (LCL) shippers using Chittagong have been experiencing delays due to a surge of garment exports clogging up the port’s cargo freight stations. Full containerload (FCL) cargoes have also been piling up in the port yard in recent weeks due to heightened imports ahead of the holy month of Ramadan, prompting a call from the port authority for users to retrieve containers.

As a result of the LCL delivery delays, storage warehouses at the port have been overrun with cargo. One terminal official told JOC.com all eight of the port’s 40,000-square-meter storage facilities are full to the brim with LCL cargo, and another 120 boxes have yet to be unpacked.

Chittagong Port Authority (CPA) secretary Omar Faruk last week sent a letter to garment manufacturers asking them to immediately take delivery of their LCL cargo to make room for goods in the unpacked containers. “The importers in the recent months are taking delivery of LCL cargoes much slower than the past which created the stockpile,” he told JOC.com.

Siddiqur Rahman, president of the Bangladesh Garment Manufacturers and Exporters Association (BGMEA), said port users should take delivery of goods immediately after arrival at the port, unless there are complications with documentation, adding that his office is preparing to issue an advisory to BGMEA members to the same effect.

Rahman suggested the port introduce penalties for port users that don’t pick up cargoes in a timely manner. “I also suggest auctioning of the goods after a certain period which remained lying idle for weeks occupying costly space of the port,” he said.

The CPA, meanwhile, sent another letter this week asking port users to take delivery of FCL containers immediately, as container yards have also reached their capacity limits. As of Wednesday, roughly 35,000 TEU of FCL containers were being stored at the Chittagong port yard despite a capacity of just 34,000 TEU, a CPA official told JOC.com.