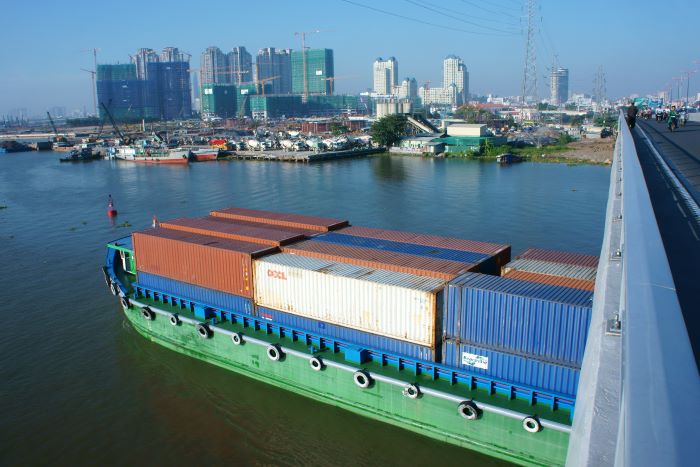 Imports of household goods from Asia, an important cargo accounting for 22.5 percent of total US imports from the region, increased only 0.6 percent year-to-date through August. Photo credit: Shutterstock.com.

US importers of household goods have ramped up ordering from Vietnam to avoid Chinese tariffs, but landside and ocean capacity strains are already showing.

Imports of household goods from Asia, a bellwether cargo in the eastbound trans-Pacific, increased only 0.6 percent year-to-date through August as the United States-China trade war dragged on, demonstrating that a large increase in imports from Vietnam was unable to offset declining imports from China.

Furthermore, because manufacturing in Vietnam is approaching capacity, and vessels leaving ports there are fully subscribed, further growth in exports of household goods will be constrained, a non-vessel operating common carrier (NVO) said.

“Vietnam is at capacity,” said David Bennett, president of the Americas at the forwarder Globe Express Services. “If you’re not there, it’s too late.”

Household goods include high-volume merchandise imports such as furniture, tableware, bedding, lamps and lighting, refrigerators, air conditioners, and dishwashers. They accounted for 22.5 percent of total US imports from Asia through August, according to PIERS, a JOC.com sister company within IHS Markit.

Household goods imports this year reflect a slowing national economy, declining imports from China — by far the largest source of those goods — and the inability of growing imports from Vietnam to replace what has been lost from China due to the tariffs.

China still had a dominant share — 69.1 percent — of US household goods imports from Asia in January-August. But imports of household goods from China alone fell 7.7 percent compared with the same period last year. Vietnam was next with a market share of 17.3 percent, driven by a 34.2 percent gain in exports to the US. Imports from Vietnam have increased by double digits in each of the past five years as the country established the manufacturing capability and infrastructure needed to grow household goods exports.

Malaysia, Taiwan, South Korea, Indonesia, Thailand, Hong Kong, Japan, and Singapore rounded out the top 10 source countries in Asia. Each of those had a market share of 3 percent or less, as they have lagged in developing the necessary manufacturing capabilities.

Vietnam at the upper limits of production capacity

Despite its rapid growth in producing household goods, or maybe because of its success, Vietnam is nearing a plateau in expanding its exports most products, not just household goods, another NVO said. In addition to the time it takes to ramp up production, Vietnam has been growing so rapidly that the growth is taxing its ability to supply sufficient skilled labor.

Based on the China model, it takes years to develop the infrastructure and manufacturing capabilities needed to launch large-scale production of furniture, bedding, lighting, air conditioners, and other household goods that are a mainstay of the US import trade from Asia. Manufacturers of those products require access to raw materials, parts and components, and a sufficient skilled labor pool.

Also, China has shown that in addition to manufacturing capability, a sophisticated supply chain is required to bring the materials and components to production facilities, and the finished products to ports for export.

Given the timeline required to bring everything together, the ability of other Asian countries to scale production up to the standards established by China is not expected to develop for years to come. “Scalability is the key,” Bennett said.

An importer of hardware and related home-improvement products said he has not seen a material shift in production of those goods from China despite the trade war. “Perhaps we will see this transpire over time, but simply put, we cannot react that quickly,” the source said.

In addition to limitations on production capacity in other Asian countries, importers of household goods say ocean services in the trans-Pacific are designed mostly for the North Asia and China markets. Carriers added four strings for a total of 18 weekly services from Southeast Asia to North America this past year, according to Sea-Intelligence Maritime Consulting, but ships leaving Vietnam are mostly full.

“There are certainly capacity issues out of Vietnam. We’re rolled sometimes,” Bennett said. On the other hand, the overall downward pressure on freight rates in the eastbound trans-Pacific has prevented spot rates from Vietnam from increasing, he said. Spot rates from Vietnam move up or down with the larger trans-Pacific market, and the trend this fall has been mostly downward, he said.

“We’re seeing some capacity-related issues from Vietnam with certain carriers,” the hardware importer stated. “We can get the cargo moving, just not always on our desired carrier.”

China is also the major exporter of computers, parts, and accessories, accounting for 61.7 percent of US imports of those products from Asia. Vietnam is second with an 8.7 percent share, according to PIERS. Computers and related accessories are a high-value but low-volume cargo in the eastbound trans-Pacific, representing 1.5 percent of all US imports from Asia.

Most computer-related imports from China have not been tariffed thus far, but the next list scheduled to take effect on Dec. 15 will impose duties on many computer products. Year-to-date through August, computer and accessories imports from China declined only 0.2 percent compared with January-August 2018. Imports of those products from Vietnam increased 14.4 percent, and imports increased 11.6 percent from Taiwan, according to PIERS.

Participants in the household goods trade with China expect that in the years ahead some sourcing will gradually shift to countries outside of China regardless of what direction the trade war takes, primarily because of increasing labor costs in China. However, with Vietnam reaching its production capacity in household goods, and other countries in Southeast Asia still at the early stages of development, China will continue to dominate that sector.

“Yes, there is a shift under way, but China is China,” Bennett said.