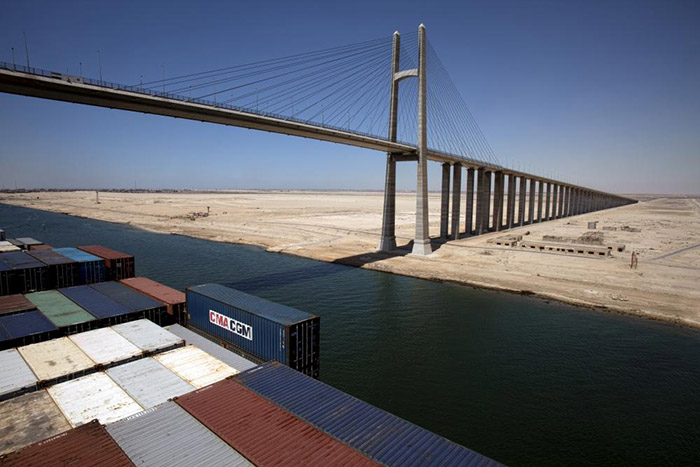 LONDON – The expansion of the Suez Canal and the reduced draft for ships transiting the Panama Canal won’t immediately impact the rival waterways’ shares of Far East-U.S. East Coast traffic, according to Alphaliner.

Apart from the launch of Zim’s Seven Star Service in May no other carrier has launched new Far East-U.S. East Coast strings via the Suez Canal so far this year, the industry analyst noted.

And the Panama Canal’s decision to temporarily reduce its draft from September 8 due to the draught caused by El Nino is also not expected to have any significant impact on Far East-U.S. East Coast services, as it will affect less than 20 percent of the transits.

But “seemingly unrelated, the two events, however, mark an intensification of the ongoing rivalry between the two canals – especially for services connecting Asia with the U.S. East Coast, where they are in direct competition.”

The new expanded Panama locks, which are due to open in April 2016, will push the rivalry further along as the balance tilts in the Central American waterway’s favor.

The average size of ships on the Far East-U.S. East Coast route via the Suez Canal has increased by 73 percent since 2005 to 7,800 twenty-foot-equivalent units, while vessels on the same trade via the Panama Canal have grown by only 12 percent in capacity to 4,600 TEUs due to size restrictions.

The opening of the new Panama locks will allow carriers to replace the current Panamax tonnage with much larger vessels, enabling the waterway to regain most of the market share it has lost to the Suez Canal since 2008.

The Panama Canal’s share of the Far East-U.S. East Coast all-water market has shrunk from about 90 percent before 2008 to a low of 48 percent in 2014 before recovering to 51 percent currently as a result of the recent launch of five new services.

The canal’s share is expected to increase to over 70 percent by the end of 2016 as most of the Suez loops focusing on Chinese origin ports should revert to the Panama route, while the all-water services centred on South East Asia origin ports are expected to retain their Suez routing due to the shorter sailing distances.