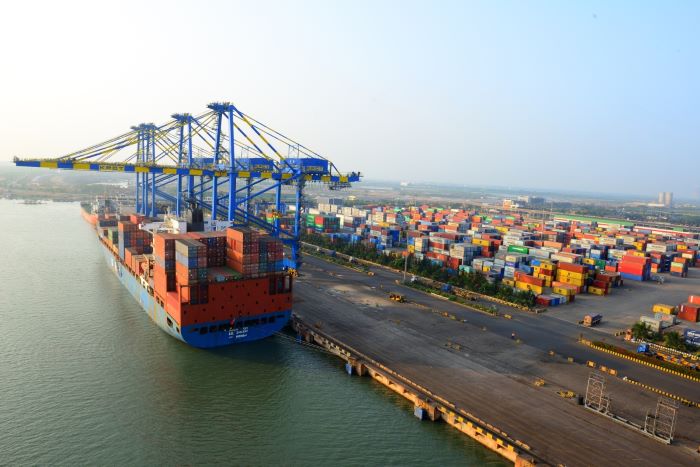 Container Corporation of India (Concor) has deepened its newfound interest in coastal shipping activity by opening a regional service between India and Bangladesh — the latest step in its “integrator” push.

The service will connect the Krishnapatnam Port, an emerging privately operated gateway in eastern India, to the ports of Chittagong and Chattogram in Bangladesh.

To jump start the short-sea operation, Concor plans to take slots on ships operated by existing carriers on the route and use “shipper own containers” in the initial stages.

Although the company issued a notice seeking trade support for its new coastal offering, it did not provide service specifics. Efforts to reach officials at the Krishnapatnam Port were unsuccessful.

In its advisory, Concor put indicative freight rates from Krishnapatnam to Chittagong/Chattogram at Rs. 32,320 ($455) for a 20-foot container and Rs. 40,400 for a 40-foot box on a free-in, free-out basis. The company said it will arrange port-related services for cargo unloading at the destination port.

“Trade is requested to take benefit of this new initiative of Concor for its export movement to Chittagong/Chattogram (Bangladesh),” the company said.

The move builds on a weekly intra-India coastal loop Concor opened in January between Kandla and Tuticorin, with intermediary calls at Mangalore and Cochin.

Concor, an offshoot of Indian Railways, commands the bulk of India’s containerized rail transportation, powered by an expansive network of more than 80 inland container depots (ICDs) across the country. As container supply chains rapidly move to an integrated mode, offering shippers a one-stop shop — akin to DHL, UPS, or FedEx in the express parcel vertical — the intermodal giant has been refocusing on areas beyond its historical strengths in landside logistics to keep pace with that evolution.

Krishnapatnam — about 112 miles north of Chennai — is a deep-water, all-weather multipurpose cargo hub, with sophisticated container handling infrastructure. The private harbor has emerged as a transshipment hub for the east coast region in recent years on the strength of ample feeder connectivity, and Concor’s new coastal offering is expected to flow more cargo in and out of the port as the concessionaire — the Hyderabad-based Navayuga Group — plans to expand container capacity to 2 million TEU annually.

The new coastal connectivity coincides with accelerated bilateral efforts by India and Bangladesh to push coastal trade between the neighboring nations under a renewed “inland water transit and trade” deal inked in 2018.

At a recent shipping summit in Cochin, a Krishnapatnam Port official urged the government to streamline procedures related to India-Bangladesh coastal trade to eliminate bottlenecks and maximize cargo loads in the budding market. Industry leaders also highlighted that a robust policy framework is critical to the development of coastal shipping and inland waterways.