The intra-Asia trade extends from Japan and China to Myanmar and Indonesia. Home to some of the largest and fastest-growing economies in the world, intra-Asia trade is expected to continue strong because of the high level of manufacturing activity of goods for export, and the strong demand by the Asian middle class for imported goods made not just in North America and Europe, but from other countries in Asia.

For example, as reported by the JOC, Vietnam is China’s biggest trading partner in Southeast Asia, and trade between the two countries has been steadily growing over the recent years,” Naresh Potty, chief commercial officer of MCC told the JOC. “With direct connections and competitive transit times, shippers from China and Vietnam can reach their markets within a week.” 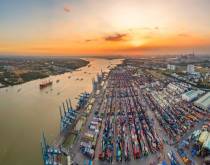 09 Oct 2019
As manufacturing continues to shift from China to countries in Southeast Asia, the diversification of sourcing will result in an increase in trade flows and greater need for logistics support, speakers at the JOC TPM Asia Conference said.
MORE »

SM Line continues intra-Asia push with joint service
31 Oct 2017
The South Korean carrier has made steady inroads into the trans-Pacific and intra-Asia trades.

Inner competition to test new intra-Asia alliance
10 Aug 2017
Doubts were raised on how members of the newly formed Korean shipping alliance will be able to cooperate on the fiercely competitive intra-Asia trade.

SM Line to launch new intra-Asia and trans-Pacific services
03 Jul 2017
SM Line Corporation plans to add nine more vessels to its fleet by the end of this year.

Carriers set new services for growing Indian subcontinent trade
13 Jun 2017
The Indian subcontinent is expected to continue generating growth in container volume, with carriers introducing services that connect India, Sri Lanka and Pakistan to the hub ports of Asia and the Mediterranean.

Overcapacity blamed for suppressing intra-Asia rates
22 May 2017
Rapid growth in intra-Asia container volume unable to get rates up, which Drewry suggests may be a result of larger vessels being deployed on the trade.

Rising bunker prices to push up intra-Asia rates
12 Jan 2017
Steadily increasing bunker fuel prices will enable carriers on the intra-Asia trade to raise rates that are at unprofitable levels on some regional routes.

Ocean Alliance unveils network for 2017
03 Nov 2016
The Ocean Alliance has released information on its network that begins on April 1, 2017, with the trans-Pacific to see the largest number of loops and port calls.

HMM among five bidders vying for Hanjin ships
28 Oct 2016
Hyundai Merchant Marine is one of five bidders for the trans-Pacific and intra-Asia networks of bankrupt Hanjin Shipping.

Signs of growth on intra-Asia have carriers expanding coverage
28 Jul 2016
Container lines are adding intra-Asia services or improving their coverage of the region to capture what appears to be increasing demand on the North-South trade.

More cargo but less revenue at OOCL
22 Jul 2016
Orient Overseas Container Line moved more containers in the second quarter of 2016 than the same period a year before.

Asia's consumers and manufacturing reshaping logistics
29 Apr 2016
Intra-Asia trade will increasingly benefit from the rapid growth of consumption in Asia as a higher percentage of cargo is shipped to end markets in the region instead of to destinations in other parts of the world.

Rail congestion lingers in LA, but small glimmer of hope