Asia-Europe rates ticked upward this week, showing support in advance of mid-January general rate increases that carriers are aiming for, according to the Friday release of Shanghai Containerized Freight Index data. 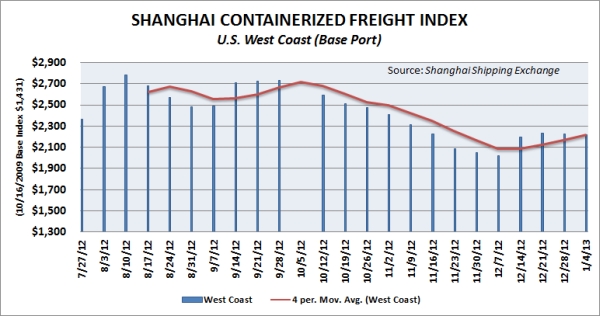 The uptick in the North Europe and Med rates this week was unexpected, and market participants "are now looking at the possibility of a more buoyant GRI in two weeks time," Clarkson's said.

Shanghai-U.S. rates were largely flat, in line with the Drewry Hong Kong-Los Angeles index released earlier in the week. The SCFI rate to the U.S. West Coast was $2,221 per 40-foot container, down from $2,223 last week, while rates to the U.S. East Coast were $3,358 per FEU, down from $3,364 last week. After failing to impose a scheduled rate increase in mid-December 2012, carriers in the Transpacific Stabilization Agreement have announced a $600 per FEU GRI to the West Coast effective on Jan. 15, 2013.