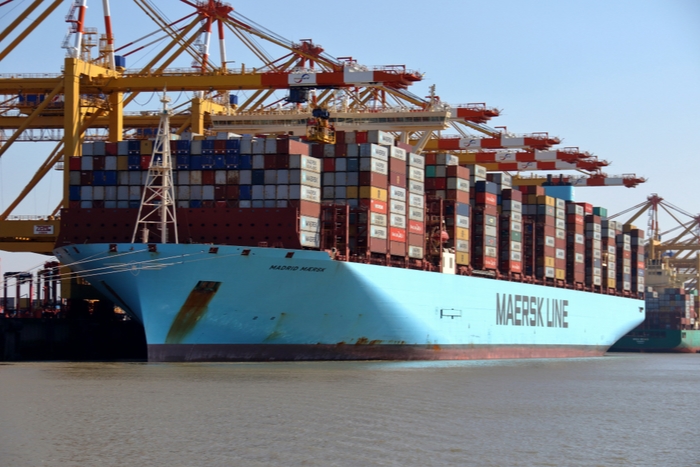 Maersk is picking off takeover targets in sectors and geographies that will advance its global integrated logistics strategy. Photo credit: Shutterstock.com.

Over the next three to five years, Maersk will continue to acquire a host of smaller logistics providers and technology platforms in multiple geographies with the ultimate goal of being able to offer a standardized suite of end-to-end logistics solutions on a global scale, according to Maersk’s Vincent Clerc.

The Maersk executive vice president and chief commercial officer told JOC.com the carrier was making targeted acquisitions to plug specific holes in its portfolio of services, although it still has some way to go before it can claim success in its transformation from a provider of ocean shipping to an integrated container logistics company.

“To be able to offer the integrated offering at scale will be a journey,” he said in an interview. “The initial stage of fleshing out the products we have, to make it more of a going concern, I would expect a 3- to 5-year horizon for us to be able to do that.”

Funding the acquisitions to support the integration strategy will not be a problem. At its recent third-quarter results announcement, Maersk said its capital expenditure guidance was $3-4 billion over the next two years, and the carrier has no intention of spending the money on new ships during that period.

“We have a very disciplined capex approach to ocean in the next couple of years, and this is aimed at freeing up resources that we can use for the rest of the strategy,” Clerc told JOC.com. “These resources being freed will be spent on inorganic and organic growth.”

But Clerc was quick to point out that Maersk was not attempting to build “a conglomerate of logistics,” and that targeted acquisitions were aimed at filling holes in the company’s logistics offering. But he said the integrated product would be more than just the sum of its parts that had many different products tacked together.

“We are looking at integration across different products and creating solutions. It will give us the ability to take care of a specific outcome and not specific legs,” he said.

Maersk is looking for platforms that have the capability to be scaled up, targeting service providers and specialists in industry verticals with specific products or geographies where there is a gap in the logistics chain that needs to be bridged.

However, a key challenge Maersk must overcome is that although the carrier offers many container logistics products at scale, they are not yet available in all geographies. “For instance, in North America we have taken steps to increase the customs clearance, but do not yet have a global customs offering,” Clerc said.

He was referring to Maersk’s acquisition of New Jersey-based customs house Vandegrift in February, which gives the company more trade compliance firepower to accelerate its evolution to an integrator.

While Vandegrift expands Maersk’s North American customs brokerage footprint, the carrier has been working toward building an online platform to create customs declarations for importers and exporters using ports in seven European countries. The customs platform is available in Germany, France, Denmark, the Netherlands, Poland, the UK, and Spain.

The more standardized approach of Maersk stands in contrast to the strategy of CMA CGM, which through its acquisition of CEVA Logistics aims to provide tailored solutions to cargo owners.

Where there is no difference in strategy between the rival carriers, however, is in the greater application of technology. CMA CGM in April rolled out a new online platform for digital transactions, at the same time working with CEVA to bundle products in a way that places it in more direct competition with non-asset-based third-party logistics providers (3PLs).

Maersk in early December announced a flurry of acquisition activity in the tech sector, making investments in a Copenhagen-based telecommunications startup through the Maersk Growth venture capital arm; in a flagship customer, the Swiss agribusiness Syngenta, for its 4PL business; in a new container visibility smartphone app, called Captain Peter; and a new cohort of startups participating in its India technology accelerator program, OceanPro.

“We are taking our time to really find some platforms that can be bolted on to what we do, and not just adding activities in the logistics scope that we will have a hard time adapting to our core business of moving supply chains that have reliance on container transport,” Clerc said.

“Scale is not necessarily just buying things you can touch. It is about connecting data flow and flow of goods in a way that has not been done before,” he added. “So we are investing in TradeLens, building up a set of services and visibility tools.”

Maersk controls its most critical assets — ships — and greatly expanded that area with the acquisition of Hamburg Sud in 2017. The carrier is now building a network where it also controls the expanded services on both sides of the ocean legs.

“The share of customers that integrate with us — and have the productivity gains and automation, a key part of the agenda — is increasing significantly, and the expectations customers have over visibility in the supply chain has also increased,” Clerc said.