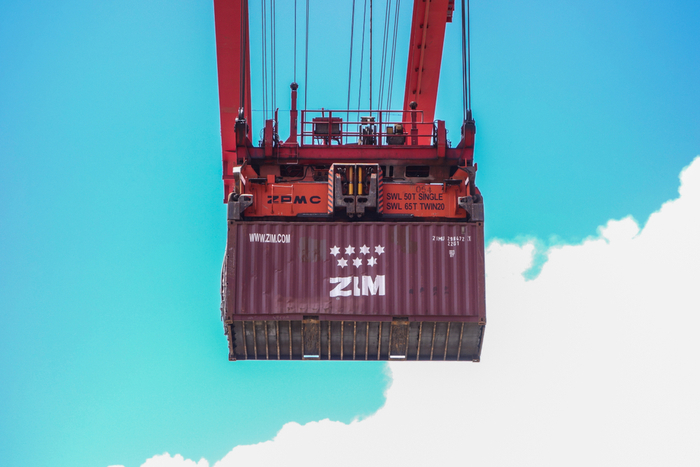 Zim earnings in the first quarter were lifted by an increase in average freight rates. Photo credit: Shutterstock.com.

An increase in the average freight rate per TEU carried by Zim Integrated Shipping Services in the first quarter more than made up for a decline in volume, with the carrier reporting a significant improvement in earnings.

Average rates across all Zim trades during the first three months of the year increased 7.1 percent to $1,091 per TEU, pushing revenue up 3.4 percent to $823.2 million despite a 4.5 percent decrease in volume to 668,000 TEU, the carrier announced Wednesday.

But the real improvement could be seen in the carrier’s operating results. Zim’s earnings before interest, taxes, depreciation, and amortization (EBITDA) rose 40 percent year over year to 97.2 million in the first quarter. Adjusted earnings before interest and taxes (EBIT) of $27.2 million was 23.6 percent above the same quarter last year. Zim’s net loss of almost $12 million was also a 49 percent improvement year over year.

“Despite the unprecedented impact of the coronavirus disease 2019 (COVID-19) crisis on the global economy in general, and on the shipping industry in particular, Zim was able to mitigate the adverse impact of the crisis, and Q1 2020 results show improvements in all parameters, compared to the same period in 2019, including strong cash generation and a continued deleveraging of our balance sheet,” Zim CEO Eli Glickman said in a statement.

Most of the major carriers have now reported their first quarter results, with Maersk posting a positive EBIT of $552 million, which Sea-Intelligence Maritime Consulting noted in its latest Sunday Spotlight was its second-highest first-quarter EBIT in the last decade, and a significant $322 million higher than what the carrier recorded in the first three months of 2019. Maersk was also the only carrier to record a three-digit year-over-year increase in EBIT in the first quarter.

In terms of volume, Sea-Intelligence noted that Hapag-Lloyd was the only carrier to report global volume growth in the first quarter, increasing its throughput 4.2 percent year over year to 3.05 million TEU, bringing the Hamburg-based carrier within 1 million TEU of Cosco Shipping for the first time since the first quarter of 2015.

However, Sea-Intelligence said the coronavirus mainly impacted China and neighboring Asian countries for much of the first quarter, with the crisis only becoming global in nature at the end of March.

“As such, the real impact of the crisis will be felt in Q2 and will be reflected in the carriers’ Q2 results,” Alan Murphy, CEO of Sea-Intelligence, noted in a statement. “That said, carriers have so far maintained freight rate levels, and spot rates, net of fuel, are up 25-40 percent in some trades, which may provide some respite in these tough market conditions.”

Ocean rates remained stable this week, but rate management platform Freightos said in a market update Wednesday there are initial signs of recovery as some carriers reinstate canceled Asia-US sailings and others announce rate increases for Asia-Europe.

“Some carriers announced they were reinstating a small number of sailings from Asia to the US in June, while others announced increased rates to Europe from Asia,” Freightos said. “These steps may be partly due to carriers overestimating how low demand would fall, but there are also signs of increases in bookings: some forwarders report a muted seasonal-driven uptick in US orders, while some indicators suggest supply chain activity is picking up in Europe as many countries ease restrictions.”