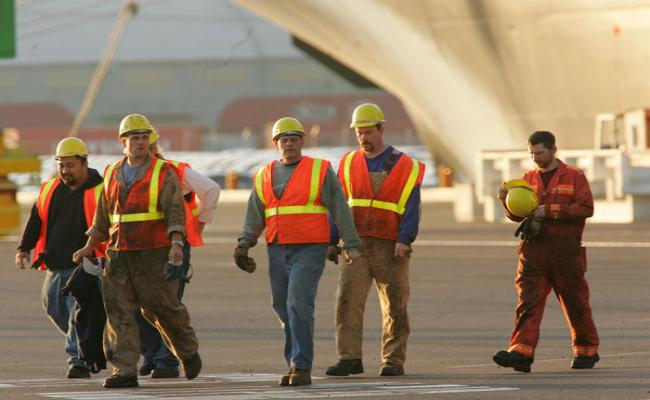 LONG BEACH — The head of the group representing U.S. West Coast waterfront employers said the federal government and shipping public won’t again allow negotiations with longshoremen to go down the tortuous path that led to containerized supply chain disruption in 2014 and 2015.

“Negotiations are more visible now. There is pressure on both sides, and pressure does a lot to get things done,” Pacific Maritime Association President Jim McKenna told the annual conference of the Agriculture Transportation Coalition in Long Beach.

The 2014-15 contract negotiations resulted in crippling International Longshore and Warehouse Union work slowdowns and a PMA response that included cessation of lucrative night and weekend work for longshoremen. The job actions began on Oct. 31, 2014, and continued until a tentative agreement was reached Feb. 20, 2015.

West Coast ports went into gridlock for almost four months. Exporters, especially agricultural exporters who must ship their perishable cargo through the closest port, are still smarting from the loss of business, some of which was lost indefinitely.

McKenna acknowledged that loss of market share is certainly possible. That was exactly what happened during the contentious 2002 contract negotiations, which involved ILWU work slowdowns, a 10-day lockout called by the PMA, and federal intervention with a Taft-Hartley back-to-work injunction. “You lose 5 percent, but only 2 percent comes back,” he said of such negotiations.

The 2014-15 negotiations spawned at least three proposed bills in Congress aimed at preventing future talks from degenerating into work slowdowns, strikes or lockouts. None of the bills have passed. The reason West Coast contract negotiations are prone to work slowdowns and lockouts is that the talks invariably extend beyond the expiration of the existing contract. When a contract expires, the union usually refuses to extend it, so the “no-strike” clause is void.

Employers always seek to extend a contract until a new one is reached, and some members of Congress think that is a good idea. One of the bills that was proposed last year would mandate that contracts be extended during negotiations to keep the no-strike clause in effect. The odds of such legislation passing are low, so if employers are ever to achieve that goal, “it would have to be negotiated,” McKenna said.

The PMA president suggested, however, that an even more favorable scenario is possible. During the 16th TPM conference in Long Beach in March, ILWU President Bob McEllrath was asked if the ILWU would agree to early discussions to extend the 2014 contract beyond its expiration date of July 1, 2019. McEllrath said that if McKenna formally requested early negotiations, he would present the proposal to the union membership.

McKenna in fact sent a letter to McEllrath, and the union is now considering the request. McKenna said he is “hopeful” that the ILWU will agree to negotiate an extension. “The logical thing is an extension of the contract for three to five years,” he said, although he gave no time frame for a response from the union or a date when early negotiations would begin.

On the other hand, neither side wants a repeat of 2014-15, when the secretaries of Labor and Commerce joined in the negotiations. “The feds didn’t broker a deal. The fear of interference forced us into a deal,” he said.

And this is supposed to be

Permalink Submitted by ferrullig@minds... on Jun 20, 2016 12:00PM EDT
And this is supposed to be good? The Feds won't let it happen but they can't pass a bill to do anything about it? how does that work? And once again ask the question of any and all involved - when will productivity be discussed and the 5 hour work day done away with? Nothing we've seen suggests that productivity will change and unless it does, spending all of the money in the world and talking more about it won't solve the congestion or other problems at West Coast ports. The Middle Harbor project first phase is about to open to production, will we see 35 or more moves and hour there? if not, a boat load of money for pretty robotic machines. If I didn't know better, I'd say the folks involved are afraid of talking about productivity publically; I hope they aren't and are really getting at it. We need to productivity and so do they. They are losing share and don't seem to care. They were able to close Portland to any containerships and had to lose quite a few jobs - and again, don't seem to care.
Maritime News›Labor
Port News›Longshoreman Labor›International Longshore and Warehouse Union
Port News›Terminal Operators›Pacific Maritime Association
North America›United States