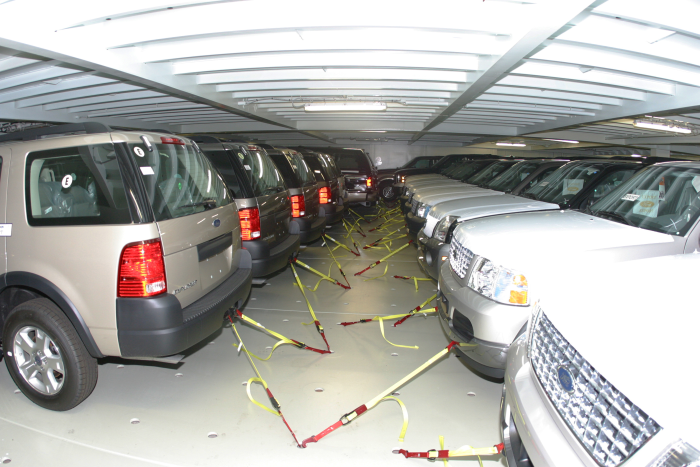 When the global financial crisis broke out in 2008, automotive sales in North America fell off a cliff, and vessel calls at U.S. ports for roll-on, roll-off vehicle cargo dropped from 4,101 in 2008 to only 3,336 in 2009. It wasn’t until 2011 that U.S. vessel calls for ro-ro vehicles recovered to 2006 levels. Now, North American vehicle production is on the rise amid strong demand for vehicles in the NAFTA countries and foreign markets.

According to PwC Autofacts, as many as seven new plants are expected to open between 2013 and 2020, and vehicle production in the U.S., Canada and Mexico will expand from 16.2 million units in 2014 to about 19 million units by 2020. As a result, the volume of vehicles heading north of the Mexican border will rise significantly.

What do those figures portend for ro-ro vehicular trade? According to U.S. Maritime Administrator Paul Jaenichen, the volume of new vehicles transported by sea already exceeds pre-recession levels, reaching 10 million metric tons and $38 billion spread among nearly 40 ports this year. U.S. imports account for about 6 million tons of that volume. The United States imported 3.4 million units last year, up from 2.7 million in 2009.

Those figures, however, lag the peak of 3.8 million units imported before the onset of the financial crisis, according to Brandon Mason, senior analyst for the Americas at PwC Autofacts.

Moving in the opposite direction, U.S. vehicle exports barely exceeded 2 million units in 2013, of which nearly 1.1 million units went beyond North America to non-NAFTA destinations such as Germany, Saudi Arabia and China. As more German and Japanese brands of cars and light trucks expand capacity in the United States and Mexico, U.S. imports from Asia and Europe, as a percentage of the overall U.S. automotive market, are expected to level off or decline.

“While the volumes (of ro-ro traffic) are changing, what’s more important is substantial changes in the directional flows,” said Michael Robinet, managing director of IHS Automotive Consulting. Overall, “the vehicle manufacturers are getting smarter” when it comes to managing the total cost of vehicular logistics. “They are giving new prioritization to the cost of logistics. Whereas it was more of an afterthought before, it is definitely a more important part of the equation now.”

Bryan Burkhardt, director of North American and intercontinental vehicle logistics at General Motors, told a recent industry conference that GM and other automakers still have an opportunity to take waste out of their outbound logistics networks, including by more effectively combining transportation modes and routes. “For finished vehicle logistics, specifically, we are growing our network design capabilities,” he said. “To the extent that we can better engineer the network, we can take waste out of the system.”

As production increasingly moves to Mexico, Asian and European automakers are relying more on emerging routes, while more traditional sea routes, such as Japan to the U.S. East Coast are suffering declines, Robinet explained. “While they might have (previously) shipped a Honda (vehicle) from Japan to the eastern U.S. (via the Panama Canal), now they may be shipping it from Mexico  — from Veracruz or Altamira to Tampa, or maybe Houston or maybe Mobile,” he said.

As a result, Robinet said, “They are no longer using the Panama Canal to get that vehicle to the eastern U.S., but are now using rail and going through the Gulf of Mexico.”

Elsewhere around the world, Robinet cited the development of new routes between ports in Thailand and Australia, and even between Thailand and Japan.

In North America, questions are growing about whether enough rail equipment exists to handle the new traffic that will come as Mexican production reaches a peak. “The network has changed dramatically,” said Scott Goodwin, senior manager for transportation at Volkswagen Group of America. “I don’t think we have enough railcars.”

Sergio Gutierrez, head of Mexico for Oslo, Norway-based ro-ro carrier Wallenius Wilhelmsen Logistics, said the industry was “surviving” at today’s volumes, but “the real increases have not yet come, and we will definitely have to catch up our rail capacity.” Robinet also is concerned about a shortage of railcars.

What impact will these changes have on the top ro-ro ports? According to the Maritime Administration, the largest ro-ro ports in the U.S. are Baltimore, followed by Jacksonville; New York-New Jersey; Los Angeles-Long Beach; Brunswick, Georgia; Tacoma; Charleston; Philadelphia; Virginia Ports; and the Columbia River ports.

Baltimore handled a record 749,100 vehicles last year, up 16 percent from 2012. Jacksonville, the leader in exports, handled more than 450,000 vehicles in inbound and outbound trade last year.

Robinet said he suspects Jacksonville and Brunswick may be “catching up with Baltimore” as automakers search for new routes that are more cost-efficient now that so much production is moving into Mexico. In their fiscal 2014 that ended on June 30, the dedicated auto and machinery terminals at the ports of Brunswick and Savannah handled a combined record of 700,702 units of ro-ro cargo.

Ro-ro traffic also is growing outside of North America. Ro-ro traffic at the Port of Rotterdam expanded 9 percent to 4.8 million metric tons in the first quarter of this year, driven by the economic recovery in the U.K., which imports many vehicles from Rotterdam. In Zeebrugge, Belgium, which boasts the largest ro-ro volumes of any European port, ro-ro traffic rose 5.8 percent to 6.6 million metric tons in the first half of 2014 compared to a year earlier, also because of the recovery in Britain, port officials said.

Wallenius Wilhelmsen’s vehicle volumes increased 13 percent in the second quarter year-over-year, according to Marketing Director Anna Larsson, “The strongest contribution to total income has been from growing traffic from Asia-Pacific and Australia-New Zealand toward Europe, although the strongest volume growth was recorded in the Asia-to-North America and Asia-Atlantic trades,” she said.

High fuel costs and other factors, however, are driving up fleet and voyage costs for WWL, whose parent companies are Wilh. Wilhelmen of Norway and Wallenius Lines of Sweden. “The right mix of cargo is important to ensure optimal utilization of the vessels, so that has been an issue lately,” Larsson said. “Volatility in demand also increases our costs as it makes optimization more difficult. To counter this, improvement initiatives and efficiency programs are continuously implemented to improve the group’s profitability, including cost and fleet optimization initiatives.”

Those initiatives include chartering vessels or turning chartered vessels back to their owners, adjusting sailing speeds, and recycling of older ships.

However, increasing the number of ports, and making frequent or major changes in production patterns also drive up costs, she added.

Still, some ro-ro carriers are proceeding with plans to expland their fleets. At the end of June, WWL operated 58 vessels, representing 389,999 car equivalent units, but plans to build eight post-Panamax pure car and truck carriers, known as PCTCs, by 2016. “The cost per unit transported is reduced with bigger vessels, and modern vessels are more efficient than older ones,” Larsson said.

Oslo-based Hoegh Autoliners, which operates a fleet of 60 PCTCs, recently laid the keel for the first of six new post-Panamax PCTC vessels, to be delivered by 2016. The vessels will be the world’s largest of their kind, each boasting a carrying capacity of 8,500 car equivalent units.

And NYK Line, which operates one of the world’s largest ro-ro fleets, will build four post-Panamax PCTCs by 2015, each with capacity of about 7,000 units.

These carriers are hardly the only ro-ro carriers to seek greater efficiencies by building PCTCs, vessels designed exclusively for cars and trucks. The market for conventional ro-ro vessels, which also can transport wheeled vehicles used for construction, mining, agriculture and other industries, will continue to shrink, according to a recent report by Netherlands-based consultant Dynamar.

NYK also has strengthened its efforts to provide additional value-added services for its vehicle manufacturing customers. Those efforts include pre-distribution inspection processing, including inspections before final delivery to dealers, supplying parts and repairing assembled automobiles at terminals.