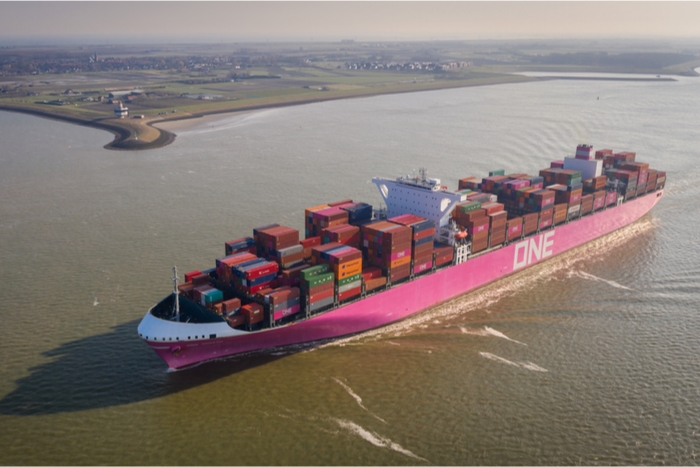 ONE will not be able to enjoy its first positive result for long as economic storm clouds gather on the horizon. Photo credit: Shutterstock.com.

Ocean Network Express (ONE) has recorded its first full-year profit since launching in 2017, despite a loss-making final quarter as the coronavirus disease 2019 (COVID-19) began to drag down container volume.

The Singapore-based merger of Japanese carriers NYK, MOL, and “K” Line reported a $105 million net profit for the fiscal year ended March 31, improving on a $586 million loss in the previous year as revenue rose almost 10 percent to $11.8 billion.

The merger of the container shipping units of the three Japanese carriers has also netted considerable synergy effects, with a three-year target of $1.05 billion achieved in two years.

An increase in low-sulfur fuel prices as a result of the IMO 2020 mandate that began Jan. 1 were offset by the subsequent drop in bunker costs through the calendar first quarter, resulting in ONE reporting no change in the average bunker price per ton compared with the previous financial year.

But ONE will have little time to enjoy its first positive result. The carrier has warned of difficult times ahead as the global economy rapidly deteriorates and expects this to have a serious impact on the supply chain.

“Demand is declining in large consumption regions such as Europe, North America, and many other locations, and we executed a considerable scale of void sailings in April to meet decelerating cargo demand,” the carrier noted.

Data from Sea-Intelligence Maritime Consulting shows that more than 400 sailings have been blanked on deep-sea trades. On the Asia-Europe and trans-Pacific trades alone, the amount of weekly capacity removed in the past week increased from 3.1 million TEU to 3.4 million TEU. The analyst estimates that the total lost volume in 2020 could reach 7 million TEU.

The ability to quickly reduce capacity to match falling demand can be seen in ONE’s load factors on the trans-Pacific and Asia-Europe trades. In the January-March period when the coronavirus began to drag down volume, average ship utilization on Asia-Europe was 100 percent, and 92 percent on the Asia-North America route. While ONE did not give an average rate per TEU, the ONE index shows average freight rates up strongly through the first quarter.

Cosco Shipping and OOCL, subsidiaries of Cosco Shipping Holdings, have shown the same ability to maintain a tight group on rates through the management of capacity. Group revenue for the Chinese carrier of $5.1 billion was up almost 3 percent in the first quarter year over year, and revenue per TEU across all trades improved by $43 to $949 per TEU.

Those capacity management skills will be urgently needed as manufacturing PMI readings for April indicate a significant weakening of global manufacturing. The impact of the coronavirus globally led to a substantial drop in export sales in April, with orders plunging on weaker foreign demand, according to the Caixin China General Manufacturing PMI.

Peter Sand, BIMCO chief shipping analyst, said in a market update Thursday that manufacturing PMI readings served as a bellwether for container shipping volume for the months ahead, and the latest data suggested 2020 would be a stern stress-test for carriers.

“Supply chain disruptions are on retreat, which is certainly a positive development, but with slowing consumer demand for finished goods, seaborne container volumes are set to remain low or outright decline in 2020,” he said.