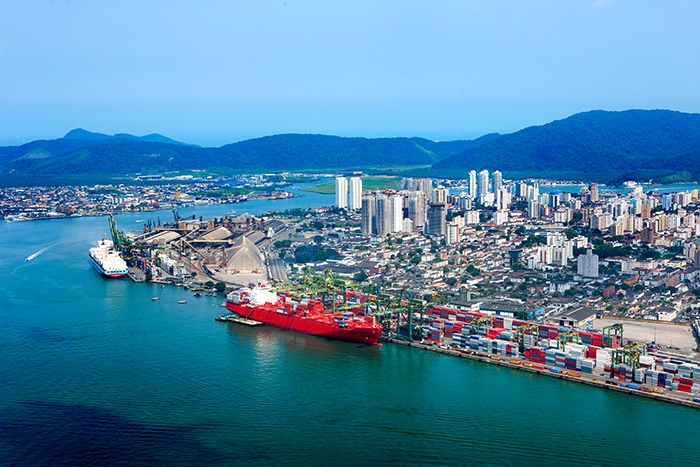 From Q1 2013 through Q3 2019, container volumes in the volatile Asia-East Coast South America trade grew in 15 quarters and shrunk in 11 quarters on a year-over-year basis. Photo credit: Shutterstock.com.

Trade in and out of South America has always been volatile, and while there has been little sign of improvement on Asian routes in the last year, the 2019 European Union–Mercosur free trade agreement (FTA) could finally bring some much-needed stability to the northbound Europe trade lane.

The FTA between the EU and countries within the Mercosur bloc — Argentina, Brazil, Paraguay, and Uruguay — was reached in June last year after 20 years of negotiations. Venezuela is currently suspended from the Mercosur agreement.

But lawmakers in Europe are having a tough time ratifying the deal, which will eliminate tariffs on 91 percent of products traded between the two regions. First, the agreement needs to be signed and ratified by all 27 EU member states, as well as the parliaments of the South American countries. Standing in the way, however, are environmental policies that last year led both France and Austria to reject the deal because of concerns over burning of the Amazon rainforest in Brazil.

While legislators try to get the deal through their parliaments, container volume through 2019 reflected the weakening economies at both ends of the north-south trade lane. Data from Container Trades Statistics (CTS) indicates northbound South America–Europe container trade showed slight growth through the summer before fluctuating wildly in the last four months of the year. Year over year, northbound volume slid 5.1 percent in September, jumped 10.4 percent in October, and then tumbled 9.8 percent in November before growing 4.2 percent in December.

The 2019 performance was in sharp contrast to the previous year; although 2018 volume was only 3.1 percent higher, the average monthly volume growth was above 9 percent compared with the 2019 average monthly decline of 3 percent. Almost 16 percent growth in South America–Europe volume was recorded in April 2018 alone.

Data from CTS show growth in southbound container volumes from Asia to South and Central America slowed in 2019, inching up just 0.7 percent compared with year-over-year growth of 7 percent in 2018 and 7.9 percent in 2017.

A ‘poster child for volatility’

Considering the economic performance of the major economies in Europe and South America during 2019, that volatility in demand is unsurprising. Global Trade Atlas (GTA), a sister company of JOC.com within IHS Markit, said in a recent forecast that political and policy uncertainty continues to shape the economic outlook for Latin America, which is relatively gloomy through 2020-21.

“Latin America’s outlook remains challenging. Our latest forecast calls for the region’s real GDP to grow 1.3 percent in 2020 after expanding 0.8 percent in 2019,” the GTA forecast stated.

Despite the poor economic growth, Sri Laxmana, vice president of global ocean services at C.H. Robinson, remains positive on trade between South America and Europe and is expecting the EU–Mercosur agreement to increase business in 2020. In preparation, the forwarder has increased its local presence in South America.

“C.H. Robinson continues to focus on growing the Mediterranean and South America trade. As final negotiations on the EU–Mercosur free trade agreement are finishing up, we’re keeping a close eye on updates, so our customers take full advantage of the benefits,” he said.

A crucial player in South America trade, Brazil has a nominal GDP of $1.85 trillion as shown in GTA data, making it the ninth-largest economy in the world. The country has been through a series of economic setbacks in the past few years, but recently Brazil and China — both members of the BRICS group of emerging nations — have greatly increased their reciprocal trading efforts, starting from a very low base in the 1990s.

In 2009, China became Brazil’s largest trading partner — usurping a role the United States had held for the previous 80 years — and it has maintained that position every year since. Full-year data is not yet available, but IHS Markit analysts expect two-way trade between Brazil and China in 2019 to total between $105 billion and $110 billion. Brazilian government statistics for 2018 show the country exported $64.2 billion in goods to China, with soy and petroleum leading the way, and imported $34.7 billion.

In a Container Insight Weekly newsletter late last year, Drewry called the Asia–East Coast South America container trade “the poster child for volatility,” with huge swings in monthly demand and freight rates. The container shipping analyst said this seesaw performance has existed for many years; from the start of 2013 to Q3 2019, quarterly southbound flows have risen in 15 quarters and shrunk in 11 quarters on a year-over-year basis.

According to Drewry’s container spot rate index, the standard monthly deviation for Shanghai–Santos spot rates over the first nine months of 2019 was $285 per FEU, which compared favorably with the average deviations of nearly $500 recorded in the previous two years. In 2016, the monthly standard rate deviation was as high as $1,100 per FEU, the analyst said.

Drewry said preliminary 2019 estimates for trade between South America and Asia show year-over-year growth of 8.8 percent northbound and 0.3 percent on the southbound trade. The analyst said there was the potential for further freight rate increases in 2020, “so long as demand doesn’t fall off a cliff.”

Ocean freight rates between the two regions also aren’t likely to budge in the next few months, according to rate benchmarking and market analytics platform Xeneta. Notably, the spot market is at a much higher level than the contract market, with about $400 difference between the two.

Based on the current long-term contracted rates in the platform, Xeneta said it expects northbound South America–North Europe rates to hold at about $1,400 per FEU through the end of the first half of 2020. The firm projects southbound North Europe–South America contract rates will fluctuate slightly at about $1,000 per FEU almost through the end of the half. However, given the current economic climate and lingering uncertainty over fuel pricing in the IMO 2020 era, Xeneta is reporting that many shippers have agreed to flexible contracts that allow them to renegotiate mid-term.

Rafael Llerena, CEO of reefer specialist Easyfresh, said the Argentinian and Venezuelan economies are in crisis, weakening their buying power, and social unrest in Chile and Bolivia is disrupting cargo flows.

“While we had a period of austerity within the EU, most of the South American countries were developing fast. This is now over, with the EU close to stagnation and South American GDP [gross domestic product] growth falling,” he told JOC.com.

But he said the reefer trade is more balanced than that of cargo filling dry containers. Brazil’s demand for European food imports such as stone fruits from the Mediterranean is increasing, while the country has remained important as an exporter to the EU of tropical fruit out of the Port of Salvador.

Countries on the West Coast of South America, meanwhile, have been suffering from reefer space restrictions on the northbound routes, Llerena said. “Peru, Ecuador, and Chile are strong produce exporters, while the number of carriers from southern Asia Pacific to Europe and vice versa is limited,” he said.