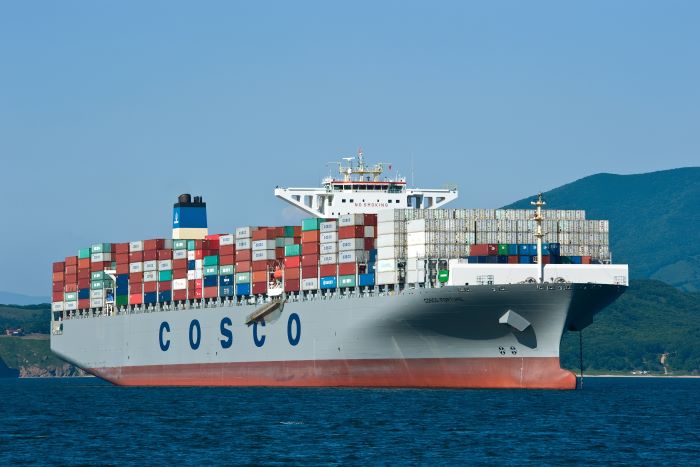 Cosco’s operating profit fell 10 percent to $500 million in the first half of the year, while net profit was down 3.8 percent to $283 million. Photo credit: Shutterstock.com.

Cosco Shipping Holdings managed to improve revenue on all the international trades during the first half of 2020, but it was not enough to lift operating profit or net profit as China’s largest shipping company was unable to duplicate the success of its competitors in matching capacity with falling demand.

The parent company of Cosco Shipping and OOCL recorded revenue of $10.8 billion in the first half, a 3.2 percent increase over the first six months of last year, despite container volume falling 5.79 percent to 11.85 million TEU, it said in an earnings statement.

Cosco is one of the last of the major carriers to report interim earnings -- CMA CGM publishes its Q2 results Friday -- although the Chinese company's results buck the trend seen among its peers where the strategy of matching capacity to weak demand as COVID-19 measures locked down major markets was wildly successful.

In its management analysis of the interim results, the group noted plans to build a more integrated service network focused on changing customer demand patterns as global trade slowly recovers from the effects of the coronavirus disease 2019 (COVID-19).

The Hong Kong-listed group said it would continue to adjust global routes and fleet capacity as it identified these demands, while strengthening the development of regional, emerging, and non-China markets.

Cosco remained positive about the remainder of the year and noted the fundamentals of China’s long-term economic growth would remain stable and support container shipping growth.

“As China's domestic economy picks up, China will continue to play its role as an economic engine, which brings both confidence and impetus for the stabilization of the world economy, as well as new opportunities to the healthy development of the global shipping market,” the carrier said.

Cosco said the group would continue to use sea-rail and land-sea transportation to create an integrated service network, using the China-Europe rail and further developing the Greek hub of Piraeus, where the carrier could leverage its wholly owned terminal to expand the capacity and service scope of what it called “the China-European sea-rail express.”

Global Shipping Outlook: A Sneak Peek at 2021
Port Performance North America: Managing Cargo Flow During a Pandemic — and Beyond
END_OF_DOCUMENT_TOKEN_TO_BE_REPLACED