Canada Trade and Shipping Outlook
TPM22: What We Learned — Container Shipping in the Crosshairs
Managing E-Commerce From Order to Delivery and Beyond
END_OF_DOCUMENT_TOKEN_TO_BE_REPLACED 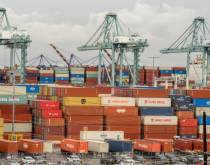 Carriers sweep empties from US ports ahead of fresh import wave

25 Mar 2022
Ocean carriers are stepping up efforts to sweep up empty containers that are congesting ports on the US West and East coasts ahead of an expected surge of new imports.
MORE »

Record 2017 volume leads Zim back to profitability
22 Mar 2018
It has been a good year for ZIM, which has returned to profit following a huge loss-making 2016.

Zim swings to profit on higher demand and rates
30 Aug 2017
Zim Integrated Shipping Services swung to a slim profit in the second quarter from a hefty loss a year ago.

Maersk ships first to pass under raised bridge at NY-NJ port
15 Jun 2017
While ships of slightly larger than 10,000 TEU have stopped at GCT Bayonne, the Zim Antwerp will be the the first ship to pass under the elevated bridge.

Zim adds Wilmington, Charleston to Asia-US services
20 Mar 2017
The services to the US Southeast are the latest in a series of trans-Pacific services the Haifa-based carrier has been introducing ahead of the restructuring of the global vessel-sharing agreements April 1.

Zim restructures services on key trades
19 Dec 2016
Zim Integrated Shipping Services on Monday announced a restructuring of services on its key liner routes that will take effect next April.

THE Alliance teams with Zim on trans-Atlantic service
07 Dec 2016
The members of THE Alliance on Wednesday announced a revamped Mediterranean-East Coast North America service via a link with Israeli ocean carrier Zim Integrated Shipping Service.

Zim slumps to loss as low freight rates offset higher volume
26 May 2016
Zim Integrated Shipping Services swung to a loss in the first quarter despite an increase in container volume.

Zim boosts 2015 profit after difficult fourth quarter
24 Mar 2016
Zim Integrated Shipping Services closed 2015 in the black, but sank to a loss in a fourth quarter marked by record-low freight rates.

Danieli resigns as Zim CEO
08 Jan 2016
Rafi Danieli, CEO of Zim Integrated Shipping Services since 2009, is resigning after a 37-year career with the Israeli carrier.

Zim delays Wall Street IPO, Israel report says
05 Jan 2016
Zim Integrated Shipping Services has delayed an initial public offering on Wall Street planned for the first half of the year because of deteriorating market conditions and slowing world trade, according to an Israeli news website.

Canadian West Coast ports have no buffer for US cargo diversions