Although Yang Ming Line is Headquartered in Keelung, Taiwan, it opeates numerous services that link Taiwan with mainland Chinese ports such as Shanghai, Ningbo, Xingang and Shekou. Other services link container ports in Japan, South Korea, and Southeast Asia with other ports in Europe (Antwerp, Hamburg, Rotterdam), Prince Rupert (Canada) and the U.S. (Oakland, L.A.)  Yang Ming is also a member of The Alliance, along with Hapag-Lloyd and Ocean Network Express (ONE). 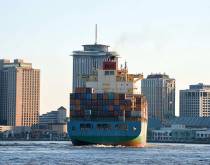 23 Dec 2020
Unprecedented trans-Pacific volumes and steadily growing exports of petrochemicals, agricultural products, and resins have prompted members of THE Alliance to launch a new direct service between Asia and the US Gulf.
MORE »

Yang Ming to offer online container quoting via BlueX
24 Nov 2020
Yang Ming has joined the growing list of container lines to offering a digital quoting and booking channel, with its use of software from BlueX Trade also a sign that this trend is taking root in Asia.

Yang Ming sees darkening container outlook
13 Aug 2019
Yang Ming improved its revenue and volume in the first half of the year, but the Taiwanese carrier raised concerns over growing capacity and weaker demand.

Shipping alliances target service levels in new networks
19 Dec 2018
After a year of dismal schedule reliability, carriers have revised their networks in an attempt to improve service levels, but standing in the way are significant challenges.

Earnings reports show depth of carriers’ low-sulfur challenge
12 Nov 2018
Rising volume and revenue by shipping lines — often double-digit increases year over year — has not been accompanied by rates rising to levels that are able to offset the effects of steadily escalating bunker fuel costs.

Yang Ming loses $124 million but expects better second half
10 Aug 2018
“While we are seeing others in the container ship industry face similar struggles, Yang Ming anticipates a healthier second half, driven by an improving supply and demand ratio,” the ocean carrier said.

Higher fuel, charter costs pull down container line earnings
15 May 2018
Higher costs have weighed on results, slightly offsetting the positive impact of stronger volumes. Still, a key CEO offered an encouraging evaluation regarding the second half of 2018.

Potential trade war, new capacity threaten carrier earnings growth
29 Mar 2018
After six years of losses, the container shipping industry ended 2017 with a profit of about $7 billion. Financial reports of the 13 carriers do show improvement but do not yet reflect a full recovery — a recovery that should continue in 2018, given the strengthening global economy, unless political issues intervene.

Yang Ming returns to profit
26 Mar 2018
Taiwan's Yang Ming has completed a profitable 2017 on the back of a stronger container market and a recapitalization plan.

Yang Ming continues to raise capital
08 Dec 2017
The capital injection from 257.7 million new common stock shares, at 10.18 New Taiwan dollar per share (about $0.34) is the third stage in the company’s recapitalization effort.

Yang Ming: US importers from Asia upped contract volume
11 May 2017
Yang Ming’s report of improving financial conditions comes a week after shares resumed trading on the Taiwan Stock Exchange on May 4.

Yang Ming beats market for US imports
25 Apr 2017
Yang Ming has managed to beat the market on the trans-Pacific eastbound in the first quarter as the carrier tries to restore shipper confidence following its recent share trading suspension.

Yang Ming suspends share trading
21 Apr 2017
Shipper concerns over the financial viability of the carriers they use has heightened after Hanjn Shipping collapsed last year.

Yang Ming losses doubled in 2016
29 Mar 2017
The report of deep losses comes as the Taiwanese government pressures the carrier to reform or face a considerable shakeup.