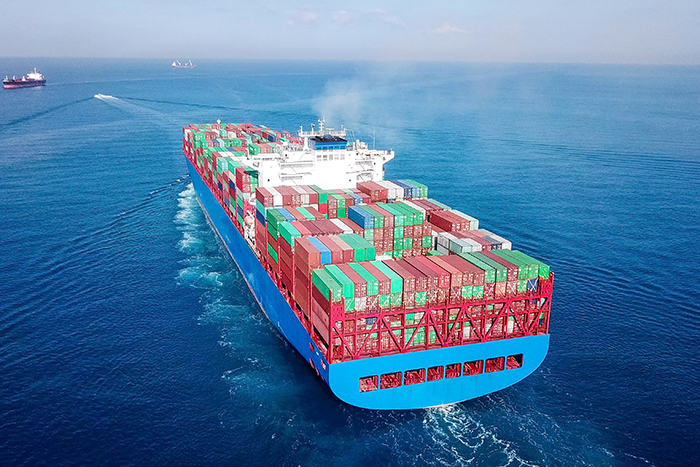 With 460,000 TEU of ultra-large container vessels scheduled for delivery, carriers and analysts expect Asia-Europe capacity growth to outstrip that of demand in 2019. Photo credit: Shutterstock.com.

Container cargo shipments in the westbound Asia-Europe trade have been up and down in the early part of 2019, but on a longer timeline, growth has been slowing, a worrying sign for carriers with heavy exposure to the world's second-busiest trade lane.

European import volume from Asia in January and February was flat compared with the same 2018 period, despite an 11 percent surge in January followed by a 15 percent decrease in February, according to the latest data from Container Trades Statistics (CTS). CTS data show Europe’s containerized imports from Asia totaled 2.66 million TEU in the first two months of 2019, down just 0.7 percent from 2.68 million TEU last year, a difference that could fit into one mega-ship.

It’s a different picture when the months are taken individually. January volume was up 10.8 percent year over year to 1.63 million TEU, while February volume was down 14.7 percent to 1.03 million TEU. The magnitude of the annual decline can be attributed primarily to the timing of the Chinese New Year holiday. In 2018, the holiday fell on Feb. 16, causing the seasonal rush to get exports out before factories closed to start later in January and finish later in February. As a result, February 2018 Asia-Europe volume was up 30 percent compared with the same month in 2017, CTS data show.

This year, the first day of Chinese New Year was Feb. 5, so the export rush was largely contained in January, followed by a sharp drop-off in February. Factories in China were closed for much of February, and total containerized exports from the country in that month declined 21 percent year over year.

“Most worrying is the downward trend in new orders. Orders are falling at a faster rate than output to a degree not seen for years, meaning production is likely to be pared back further in [the] coming months unless demand revives,” he said.

IHS Markit predicts Europe’s economic expansion will be about 1.5 percent in 2019 with adverse economic and political factors behind the continued deceleration, including the negative impact of trade tensions on manufacturing and exports, and the appreciation of the euro against most currencies except the US dollar.

“The eurozone economy moved down another gear at the end of 2018, with growth down considerably from the elevated rates at the start of the year,” said Williamson. “Importantly, with expectations of output dropping to the lowest for over four years, companies are not anticipating any imminent revival in demand.”

Although marginal in scale, the drop in volume over the first two months continues a slowing growth trend on the Asia-Europe trade, where CTS reported volume growth in 2018 of just 1.4 percent.

Drewry Maritime Research noted earlier this year that the weak 2018 growth rate was in keeping with a decade-long run of poor returns for ocean carriers in the trade. Since 2011, the compound annual growth rate for the westbound Asia-North Europe trade has been just 1.3 percent, the analyst said.

Drewry predicted in December that the westbound trade would grow 3.8 percent in 2019, but by early March, the analyst said there were already signs that it was an overly optimistic expectation.

For the carriers, the specter of slowing volume growth raises an old but persistent issue: matching available vessel capacity — i.e., supply — with demand.

“With demand unlikely to rebound prolifically this year, carriers yet again have the daunting challenge of absorbing new big ships into the trade,” Drewry noted in a March issue of its Container Insight Weekly.

As of the end of 2018, the average size of container ships deployed between Asia and Europe had increased 6 percent from the start of the year to 15,000 TEU, by far the largest of any trade. Drewry forecasts that average will rise again this year, as there are about 460,000 TEU of ultra-large container vessels (ULCVs) scheduled for delivery, to be immediately followed by another record amount of mega-ship tonnage arriving in 2020, when ULCVs with a combined capacity of 620,000 TEU will hit the water.

According to Alphaliner, deliveries of mega-ships to carriers in the Ocean and THE alliances this year will add up to 28,000 TEU a week to the Asia-North Europe trade, a 10 percent increase in weekly capacity on the route.

Despite the surplus capacity, Hapag-Lloyd and Cosco Shipping remain positive in their global outlooks for 2019. Hapag-Lloyd predicts its global container volume will grow in line with the market this year, roughly 4 percent, according to an estimate from the International Monetary Fund. The Hamburg-based carrier expects freight rates will also increase slightly over those of 2018.

“While our business is and will remain cyclical, market conditions have gradually improved for liner shipping companies over the last few years,” CEO Rolf Habben Jansen said in the carrier’s 2018 earnings statement.

Quoting data from Drewry and Alphaliner, Cosco Shipping is expecting industry-wide capacity in 2019 to grow 5.9 percent and volume to rise 4.5 percent. Maersk Line, on the other hand, is predicting the global container market will grow 1-3 percent this year, a percentage it expects will be matched by its container volume growth.

Canceled sailing notices are already coming as carriers try to manage the oversupply of tonnage. Ocean Alliance members CMA CGM, Cosco (including OOCL), and Evergreen Line, for example, will cancel five Asia-North Europe loops and one loop on the Asia-Mediterranean trade between weeks 17 to 21 (April 22 to May 20).

But even as it blanks sailings, the Ocean Alliance will be adding its seventh Asia-North Europe service in April. Carriers and shippers alike will be keeping a close eye on capacity in the trade, as surplus supply often leads to a rapid deterioration in rates, a development carriers already operating on slim margins may not be able to weather.