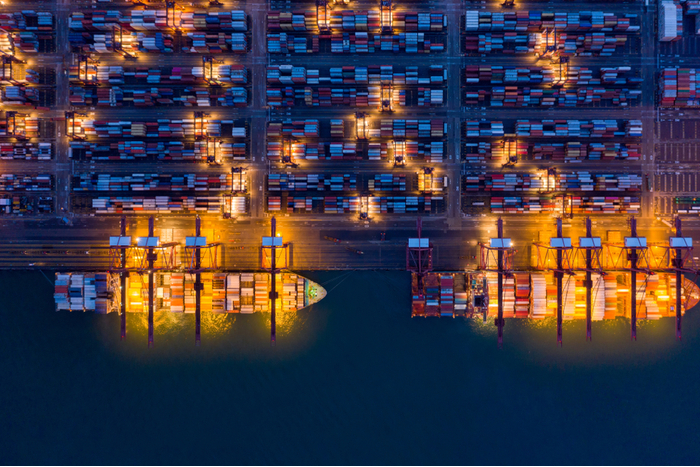 Freight rates for midsize shippers this year are double the rates in the 2020-21 contracts. Photo credit: Shutterstock.com.

Container lines have secured trans-Pacific service contract rates with midsize shippers at approximately double the rates from last year’s agreements, and have tightened commercial terms such as free-time allotment, which could also increase costs for shippers.

Midsize shippers — those importing less than 250,000 TEU from Asia annually — are in a bind this year; their core carriers do not have enough capacity to accommodate their growing import forecasts and they are finding it next to impossible to convince carriers they have not employed in the past to sign contracts with them.

“Trans-Pacific eastbound contracting has been unprecedented this year, and space has been without a doubt the dominant discussion topic,” Jeremy Nixon, CEO of Ocean Network Express (ONE), told JOC.com.

Nixon said ONE, like other trans-Pacific carriers, is attempting to strike a balance between accommodating its customers’ requests to increase their minimum quantity commitments (MQCs) by as much as 40 percent over the MQCs in 2020-21 service contracts, while ensuring they don’t book more cargo than they can handle.

According to four carriers, four non-vessel-operating common carriers (NVOs), four cargo owners, and two industry consultants who spoke with JOC.com over the past week, medium-sized shippers have for the most part concluded negotiations for their service contracts that will run from May 1 through Apr. 30, 2022. They have agreed to pay approximately $2,850 to $3,200 per FEU to the West Coast, $3,800 to $4,200 per FEU to the East Coast, and more than $5,000 per FEU for inland point intermodal shipments to interior hubs such as Chicago. In the 2020-21 service contracts that expire at the end of this month, midsize shippers agreed to rates of about $1,300 to $1,400 per FEU to the West Coast and $2,300 to $2,400 per FEU for all-water shipments to the East Coast.

According to data from freight rate benchmarking and analytics platform Xeneta, average Asia–US West Coast rates agreed to by shippers and carriers in contracts of more than 88 days signed in the last three months stood at $2,692 per FEU as of April 21, up 76 percent from the same time last year.

In past years, a doubling of service contract rates would have shaken international supply chains and threatened the jobs of logistics managers who agreed to such lofty rates. In today’s environment, in which US imports from Asia have been at record or near-record levels for nine consecutive months and show no signs of tapering off, it became apparent early on in the negotiations that price would not be the determining factor in this year’s contract discussions.

“There are no discounts” on freight rates, said Hayden Swofford, independent administrator of the Pacific Northwest Asia Shippers Association, which negotiates ocean shipping contracts on behalf of its member companies in the region. “It’s all about space.”

George Goldman, president of Zim Integrated Shipping Services USA, said the most successful customers realized early on they needed to secure space and “bite the bullet” on rates. They came to the table early and paid what was necessary to secure space this year. However, those customers that waited for spot rates to come down and capacity to increase — which never happened — are now unable to secure enough space at contract rates to meet their needs, he said.

In addition to paying higher contract rates, importers will no longer enjoy so-called free storage time at the ports that sometimes extends as long as 30 days before costly demurrage fees are charged. Although contracts generally limit free time to five days, many shippers, regardless of size, for years were granted free time of 10 days or more.

In addition, some carriers are no longer “stopping the detention clock” for retailers that were granted an extra grace period if their truckers were temporarily denied the ability to return empty containers to the ports and pick up import loads because the terminals had no more space available to accept empties.

A carrier executive who asked not to be identified said lines began negotiations indicating they would allow no more free time than the five days stipulated in the tariff, but carriers ended up agreeing to between 7 and 14 days of free time. The former practice of granting favored customers up to 30 days of free time are over, the carrier source said.

“Thirty days of free time murdered us. Most customers understand that,” he said. Furthermore, allowing equipment to remain idle for so long not only contributed to port congestion but also to chassis and equipment shortages in the supply chain, he indicated. The bottom line for shippers this year is that the free-time reductions could end up costing them hundreds of thousands of dollars — possibly millions — more than they budgeted for in previous years.

The tenor of negotiations in the eastbound trans-Pacific was established in March and early April, when the largest half-dozen retailers reportedly signed service contracts with rates of $2,500 to $2,600 per FEU to the West Coast and $3,500 to $3,600 per FEU to the East Coast, also about double the 2020-21 contract rates. Those so-called champion accounts import at least 250,000 TEU a year from Asia. Midsize and smaller shippers normally pay several hundred dollars more per FEU than the champion accounts.

Cargo owners of all sizes attempt to lower their contract rates by committing as much volume as they can with their core carriers. This year, however, shippers have attempted to increase their volume commitments so high that their core carriers cannot satisfy the higher MQCs from all of their regular customers. When the cargo owners approached carriers they had not shipped with regularly in the past, those carriers reportedly rejected them outright.

“We have to take care of the people who take care of us. We don’t have the capacity to sign for much more than that,” said the carrier executive.

That reality has made it exceptionally difficult for midsize shippers this year to secure the capacity they need. Their forecasts call for significantly higher imports this year, but they are finding it difficult to grow their business even with their core carriers.

“To be a midsize BCO (beneficial cargo owner) is very hard today. I empathize with them,” said a second carrier executive.

The logistics manager at a national midsize retailer that is forecasting its imports will increase 15 percent this year said he has had some success by focusing his MQCs on specific trade lanes from Asia, Southeast Asia, and South Asia to the East, Gulf, and West coasts. Although these targeted forecasts enabled the company to maintain its MQCs from last year, most of the carriers refused to increase the company’s MQC from last year, the logistics manager said.

“It’s tough in this market to grow,” said the logistics manager at the national retailer, who did not want to be identified.

Obtaining vessel space to the East Coast is “really crazy” right now, as those services are filling up three to four weeks before ships are scheduled to depart Asia, Sur said. Shippers unable to secure the capacity they need directly from their core carriers should approach upcoming negotiations with NVOs with the attitude of, “What do I need to do to get space from May 1 going forward?” and then be prepared to pay the higher contract rates that NVOs charge if that is what it takes to secure capacity, he said. Negotiations with NVOs must normally occur after carriers have wrapped up their contracts with large and midsize BCOs.

Shippers should also be prepared to pay higher rates than last year when booking with NVOs, though. That’s because carriers are cutting back how much NVOs can ship with them through named account (contract) rates. Carriers are pushing much more of the NVOs’ volume to higher-paying freight-all-kinds (FAK) rates, said Jon Monroe, who serves as an advisor to NVOs. FAK rates throughout the year change with supply and demand, and in the current market, FAK rates have increased dramatically.

Even so-called premium services that include guaranteed equipment and vessel space in Asia — at rates as high as $6,000 per FEU to the West Coast — are oversubscribed this year, NVOs said. Carriers are finding it increasingly difficult to guarantee that the space will be available when import volumes increase further as the peak season approaches this summer.

“No one is guaranteeing anything,” said the logistics manager at the national retailer.

Port congestion, equipment shortages, and vessel delays in major gateways such as Los Angeles-Long Beach, Oakland, Savannah, and New York-New Jersey are also restricting the effective vessel capacity in the US trades because many vessels in the trans-Pacific have been thrown way off schedule.

Carriers continue to face “structural” blank sailings. Scheduled vessel departures from Asian load ports are being missed because in many instances, the vessels haven’t even arrived there yet. These commercial and operational realities are being taken into consideration as carriers forecast their capacity availability this year, and those projections are having an impact on contract negotiations, said Zim’s Goldman.

How to Improve OTIF: 15 Tips for On Time and In Full Delivery
END_OF_DOCUMENT_TOKEN_TO_BE_REPLACED