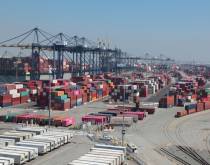 16 Apr 2021
Double- and triple-digit year-over-year increases in imports from Asia at the top US gateways speak to the issues of vessel bunching and congested marine terminals at some of the busiest ports.
MORE »

Hong Kong quarantine lifted for cargo crew: Cathay Pacific
16 Apr 2021
The removal of quarantine rules for fully vaccinated Hong Kong-based air freight crew is a relief for airlines like Cathay Pacific, which estimates the operational constraints caused by the regulation has added more than $100 million to its monthly costs in Q1.

Longshore labor availability improves significantly in LA-LB
16 Apr 2021
The ILWU and their employers have made significant progress in increasing the labor supply in Los Angeles-Long Beach, but hiring and training will continue indefinitely amid growing cargo volumes and a continued shortage of skilled workers.

Integration provider Chain.io gets VC funding to fuel logistics connectivity
16 Apr 2021
Chain.io, which provides logistics companies and shippers with a cloud-based integration platform to better connect the myriad systems they use, has raised $5 million to broaden its reach.

Shipper demand for ocean visibility growing, but slowly: Gartner
15 Apr 2021
Gartner’s first dissection of the real-time transportation visibility market found project44 and FourKites out in front of rivals, but said the market remains small relative to broader spend on logistics solutions by shippers.

US container shipping girds for new reality of undercapacity
15 Apr 2021
With the US economy recovering at the fastest pace since 1984, shipping executives and analysts are warning that container shipping is going to get messier in the foreseeable future.

Biden nominates data-centric regulator to head FMCSA
14 Apr 2021
A New York City regulator who established a minimum wage for app-based rideshare drivers has been nominated to head the US truck safety watchdog agency.

No initial port slowdowns from Suez-delayed ships calling Europe, Asia
14 Apr 2021
The surge of ships caught up in the Suez Canal blockage are arriving in North Europe and the first wave has hit Singapore, but so far there have been no significant delays reported.

Coming capacity wave may put brakes on near-term carrier profitability: analysts
14 Apr 2021
New ship orders have soared in the past few months, but there are rumblings of unease over the supply-demand balance once the vessels enter service in a couple of years.