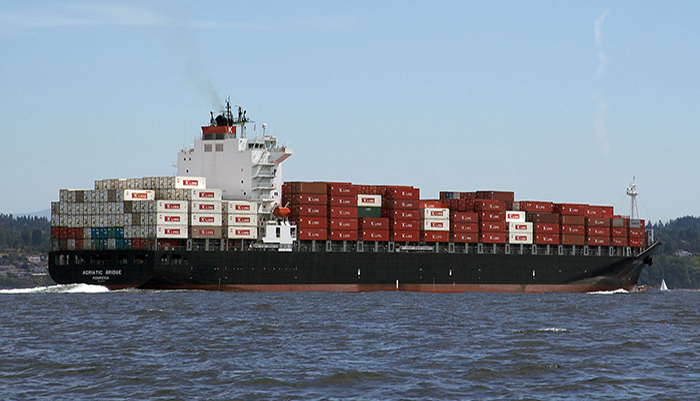 The credit ratings agency Moody’s has downgraded the credit of "K" Line and is reviewing that of Mitsui O.S.K. Lines as two of Japan’s top three container lines struggle against unfavorable market conditions.

The pair posted full-year losses for the last fiscal year, which ended March 31. NYK Line was the only member of Japan’s “Big Three” that was able to post a profit.

MOL incurred a loss of 170.4 billion Japanese yen ($1.59 billion) from the restructuring of its dry bulk and container divisions while booking an extraordinary loss from the delisting of its Daiichi Chuo Kisen Kaisha affiliate, which filed for bankruptcy protection in September.

Dry bulk and container losses mounted from the prior fiscal year, reversing MOL’s profit of 42.3 billion recorded in the previous year.

“Similar to many players in the shipping industry, we expect MOL will continue to face low freight rates in the near- and medium-term,” said Moody’s Vice President and Senior Analyst Mariko Semetko in explaining the downgrade.

The ratings agency said MOL's earnings recovery has been, and will likely continue to be, much slower than previously thought.

Structural overcapacity and weak demand growth has dragged down the earnings of several major container lines, with Singapore’s NOL, parent of APL, recording a loss of $105 million in the first quarter while profit at Maersk Line fell 95 percent year-over-year to $37 million.

Meanwhile, the orderbook for container ships stands at more than 3.7 million 20-foot-equivalent units, or roughly 18 percent of the in-service fleet, according to Sea-web Ships, a sister product of JOC.com within IHS.

Moody’s review will focus on the likelihood of MOL’s container ship segment becoming profitable, the speed at which the earnings of the bulk ship segment will recover, including the effects of the restructuring, MOL’s financial policies and plans for managing its capital structure, and its ability and willingness to take concrete countermeasures to lower leverage and improve profitability and cash flow on a consistent basis.

MOL had a working capital surplus of 6.45 billion yen, long-term liabilities of 1.23 trillion yen and total equity of 636.53 billion yen as of Dec. 31, 2016. MOL’s gearing ratio was slightly high at 1.93:1, but on a positive note, MOL’s liquefied natural gas shipping business has secured long-term contracts and will generate stable revenue.

The company, led by Junichiro Ikeda, is planning a major restructuring of its dry bulk business that includes the closure of its Singapore-based unit, MOL Bulk Carriers Pte Ltd, which focuses on the Handysize and Supramax sectors. MOL is also planning to sell or scrap more bulk carriers through the year.

With respect to its container operations, MOL will strive to improve its bottom line through an emphasis on more profitable cargo, reducing fixed costs via rationalization, primarily on north-south routes, and fleet reductions of medium-sized ships.

As for "K" Line, which was downgraded from Ba2 to Ba3, “The rating action reflects our expectation that the environment in which 'K' Line operates will remain challenging, making it difficult for the company to quickly deleverage,” Semetko said.

"K" Line had a 51.5 billion-yen loss for its latest fiscal year, reversing a 26.8-billion-yen profit the previous year. The company blamed the loss on low container and dry bulk rates, and while it managed to maintain profitability at its dry bulk unit, the container division turned to a loss from a profit in the previous year.

The company, led by Eizo Murakami, reduced by 47 percent its ordinary profit target for the fiscal year ending March 31, 2020, to 45 billion yen, which will slow "K" Line's debt repayments.

"K" Line had a working capital surplus of 155.6 billion yen as at the end of the last fiscal year, and with long-term liabilities of 489.7 billion yen and shareholders’ equity of 330.5 billion yen, its gearing ratio is slightly high at 1.48:1.

On the bright side for "K" Line is its cash reserves of 241.1 billion yen, which will allow it to stave off a liquidity crunch in the short term. The company plans to improve profitability by reducing operating expenses and exiting unprofitable trades.

"K" Line plans by March 31, 2019, to operate 196 bulkers, down from the 239 bulkers that it originally planned to operate by that time. The company estimates it will operate 59 container ships by the same date, down from 61.

Adding to the uncertainty facing the two carriers is the looming shake-up of vessel-sharing agreements among the world’s largest carriers when the existing agreements expire in March 2017.

After its merger with NOL is complete, CMA CGM will withdraw NOL’s liner unit APL from the G6 Alliance as the two join the Ocean Alliance with Cosco China Shipping, Evergreen Line and Orient Overseas Container Line. This reshuffling leaves Japan’s Big Three carriers as well as Hanjin Shipping, Hyundai Merchant Marine, Yang Ming, United Arab Shipping Co., and Hapag-Lloyd without any partners to fall back on. The latter two lines are in merger talks, and analysts have suggested that the eight carriers could form an alliance to compete with the Ocean Alliance and 2M of Maersk Line and Mediterranean Shipping Co.