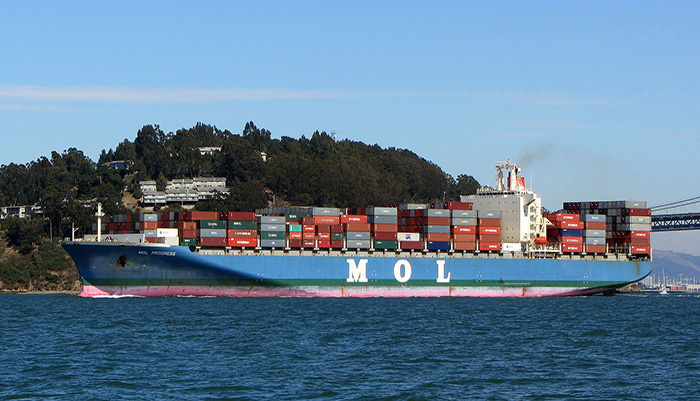 MOL actually expects to turn a profit this fiscal year, albeit a lower one than the liner had originally anticipated.

Japan’s three largest container lines warned of even worse financials than originally expected after reporting deep losses thanks to overcapacity and weak demand.

In addition to the troubles afflicting the industry generally, the Big Three in their fiscal 2016 first-quarter updates also cited a stronger yen against the U.S. dollar and higher fuel costs, which have been recovering from 12-year lows reached in January.

NYK Line’s revenue was 470 billion yen ($4.6 billion) in the April-to-June quarter, down 20 percent from a year earlier as the company suffered a quarterly net loss of 12.7 billion yen, compared with a net profit of 43 billion yen a year earlier.

MOL’s revenue was 360 billion yen in the quarter, down 19.9 percent from a year earlier, as its net profit fell 89 percent year-over-year to 1.4 billion yen.

“K” Line’s revenue was 244 billion yen in the first fiscal quarter, down 27.1 percent on a year-over-year basis. The company booked a quarterly net loss of 26.7 billion yen, compared with a net profit of 10.1 billion yen a year earlier.

All three lines also downgraded their earnings forecasts for the year and NYK Line now expects to slip into the red for the first time in five years in fiscal 2016 with a net loss of 15 billion yen compared with net profit of 18.2 billion in fiscal 2015. Revenue is now projected to decline 12.3 percent on 2015 to 1.99 trillion yen.

MOL expects revenue to amount to 1.5 trillion yen in fiscal 2016, down 12.8 percent from the 1.7 trillion yen earned in fiscal 2015. As for profit, MOL actually expects to reverse a net loss of 170 billion yen recorded in fiscal 2015 caused by extraordinary charges for the disposal of container and bulk vessels. At the same time, that profit projection of 15 billion yen for fiscal 2016 is now 25 percent lower than MOL had previously forecast.