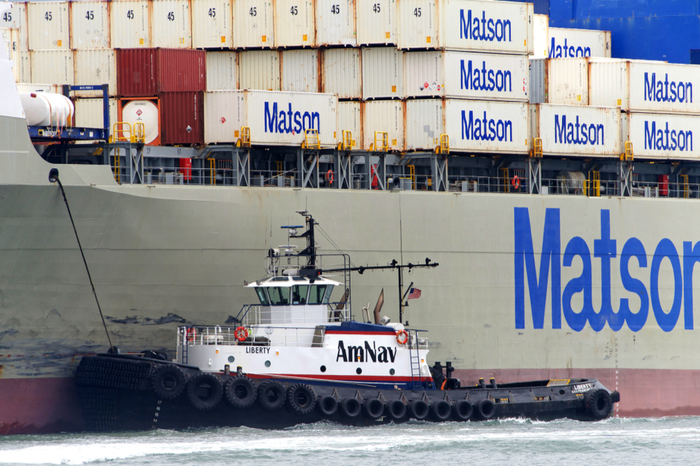 Container volume for Matson’s CLX service in the second quarter increased 2.5 percent over the same period a year ago. Photo credit: Shutterstock.com.

Matson Navigation’s expedited China service (CLX) increased its load factors in the eastbound Pacific in the second quarter because importers were willing to pay a premium for faster, more reliable service amidst volatile conditions in the United States-China trade, CEO Matt Cox said.

US retailers are carrying less inventory due to the uncertainties caused by the US-China trade war, so they are looking for a faster service than offered by other carriers, but at a much lower cost than via air freight, he said. In a trade lane from Asia to the West Coast, where vessels were on time only 38.6 percent in the first two months of 2019, according to SeaIntelligence Maritime Consulting, faster performance gives Matson an advantage in attracting footwear, apparel, and other time-sensitive cargoes, Cox said.

Transit time for the weekly CLX service linking Xiamen (14 days), Ningbo (12 days) and Shanghai (10 days) to Long Beach is at least a day or two shorter from the last port call in China to Southern California than services by other carriers. Additionally, Matson’s joint-venture Long Beach terminal operated by SSAT guarantees next-day container availability to customers.

Vessels in the CLX service are about 2,500-TEU capacity, compared with 10,000 TEU-plus vessels operated by most other carriers in the trans-Pacific.

Average freight rates for the year will also even out because spot rates in the second half of 2018 reached a five-year high of about $2,600 per FEU to the West Coast due to the front-loading. The spot rate from China to the West Coast last week was $1,589 per FEU, according to the Shanghai Containerized Freight Index published under the JOC.com Shipping & Logistics Pricing Hub.

Matson’s overall financial performance in the second quarter was “mixed,” Cox said, as strong results from the CLX liner service and its logistics services were offset by flat to lower results from its Hawaii, Alaska, and Guam services, and higher costs at its terminal operations in Long Beach, Oakland, and Seattle.

Revenue in the second quarter increased marginally — 0.1 percent to $557.9 million from the year-ago period. Operating income at $31 million was 32.6 percent lower, while net income of $18.4 million was down 43.6 percent.

Cox anticipates a short-term boost in container volume from China because Matson is reducing its Hawaii fleet from 10 to nine vessels due to lower westbound volumes from the mainland to Hawaii. The displaced vessel will replace a smaller ship in the CLX service. That will add about 200-300 container slots every five weeks to the CLX service, he said.

The China service in effect gives Matson two head-haul moves in the trans-Pacific. The westbound service from Long Beach to Hawaii and Guam benefits from higher Jones Act freight rates because it is a domestic trade. The vessels then steam to China to pick up US imports, and eastbound trans-Pacific services command freight rates that are three times or more higher than the westbound rates to Asia.

Matson also incurred additional expenses in the second quarter when it moved from Terminal 30 to Terminal 5 in Seattle. The Northwest Seaport Alliance of Seattle and Tacoma awarded SSAT and Terminal Investment Ltd. the lease at T-5 as the former APL facility is being redeveloped.

Cox said 2019 will be a year of “transition” as Matson incorporates the liner service changes and makes the necessary investment in cranes and infrastructure upgrades. Those investments will be reflected in improved financial results in 2020 and in subsequent years, he indicated.

Cox, meanwhile, said eight of Matson’s 12 vessels are being retrofitted with scrubbers ahead of the International Maritime Organization’s (IMO's) Jan. 1, 2020 mandate requiring carriers to burn fuel containing no more than 0.5% sulfur. While installation requires an up-front expenditure, fuel costs will be lower in the long term because those vessels will continue to burn lower-cost high-sulfur fuel oil, he noted.

Permalink Submitted by ferrullig@minds... on Aug 10, 2019 1:21PM EDT
Interesting perspective; but how many loads of $1800. - $2000. loads from China does it take to make up for the loss of $3500-4000. loads to Hawaii. And what costs rose to make that big of a difference in income? Removing one vessel from the Hawaii Westbound will help. But adding 300 loads every 5 weeks from China? Can't make up for the drop in Hawaii or Guam freight.
Maritime News›Container Lines›Matson
North America›United States