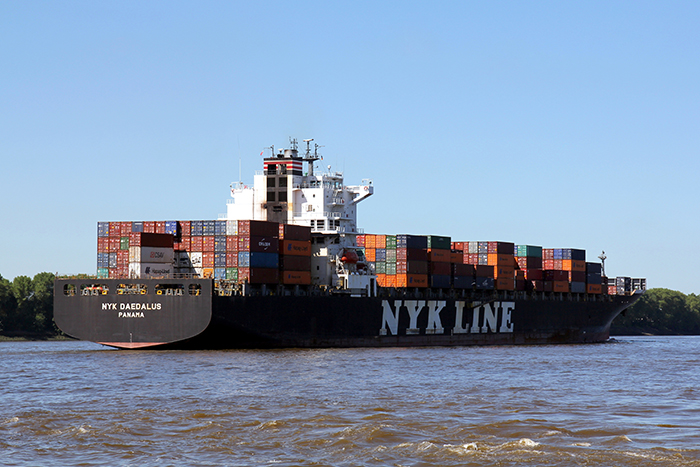 Solid results were reported by the three Japanese carriers, which will soon unite under the ONE banner. Photo credit: Shutterstock.

Profitability is flowing through the container divisions of Japan’s three largest carriers as NYK, MOL, and “K” Line prepare to launch operations under the Ocean Network Express (ONE) joint venture (JV) from April 1.

The three carriers released their nine-month results ending Dec. 31, and even though freight rates declined steadily through the last quarter of the year, the box carrying units recorded solid increases compared with the same three quarters of the 2016/17 financial year.

That puts the shipping lines in a good position to begin their new lives under the ONE banner that earlier this month cleared its last regulatory hurdle with South Africa's competition watchdog giving the all clear. Apart from the three companies' container shipping businesses, also included in the integration are their terminal operations outside Japan.

Jeremy Nixon, the former head of container shipping at NYK, will lead ONE as chief executive based in the carrier’s operational headquarters in Singapore. NYK has a 38 percent share in the JV company, while MOL and “K” Line have 31 percent each.

In the three quarters from April through December 2017, MOL’s container revenue grew 25 percent year over year to $5 billion, helping the group to a $267 million nine-month net profit. NYK’s liner shipping division reported a 28 percent increase in April to December revenue to $4.8 billion, with the group net profit hitting $153 million. It was a similar picture at “K” Line that saw nine-month revenue in its container shipping segment grow by 20 percent to $4.1 billion, lifting the group to an $85 million net profit.

NYK said although the fourth quarter (January to March) was a slack season, cargo demand was firm and the market recovery was expected to continue. But the carrier said even though stable volume had returned the bottom-line to the black, profit was expected to decrease because of one-off cost increases related to the liner integration under the ONE brand.

NYK has revised down its volume forecast for this quarter but expects to end the year with container division revenue about 20 percent higher than that secured during the 2016/17 financial year. It expects full-year liftings to reach 840,000 TEU on Asia-US routes with a utilisation rate of 89 percent, and volume to hit 498,000 TEU on Asia-Europe with a utilization of 96 percent.

“K” Line said volume grew 1 percent year over year on the Asia-North America routes and by 14 percent in the Asia-Europe services. In intra-Asia, volume rose 10 percent compared with the three quarters of 2017 on robust cargo demand but declined 3 percent on the north-south trades.

The carrier said freight rates in the year did not rise to levels initially expected, overall handling volume, including on return legs, increased by 4 percent year over year. The lower rates saw profits in the third quarter decrease on Asia-North America services.

“In the container ship business, freight rates are recovering from the historic low recorded in the previous fiscal year, but it is expected to take some time for the supply-demand balance to improve in earnest,” “K” Line said in its earnings statement.

“While consolidation and mergers between shipping companies are proceeding, the business environment is expected to remain harsh, including the anticipated effect from rising fuel prices. In this environment, the company will provide full support for the start of the [ONE] business scheduled for April and make efforts to improve profitability by developing a high level of competitiveness and service quality through the synergy effects gained through the growth of the business scale.”

MOL said in the April to December period, Asia-North America trade continued to strengthen, and although Asia-Europe trade slowed in early autumn, it rebounded again in December. Westbound trade from Europe also remained solid. The carrier said efforts to raise rates “faced continued difficulty,” as demand for cargo trade stalled after October, but rates began to improve as demand grew from the second week of December. MOL has forecast a 20 percent full-year revenue growth in its container shipping segment.

In its outlook for the January to March quarter, MOL said the demand and supply balance would tighten with rising spot freight rates due to the rush of demand before Lunar New Year in February, but the carrier anticipated rates and volume would decline during the slow season afterwards. The weekly rate movements are tracked at JOC.com's Market Data Hub.