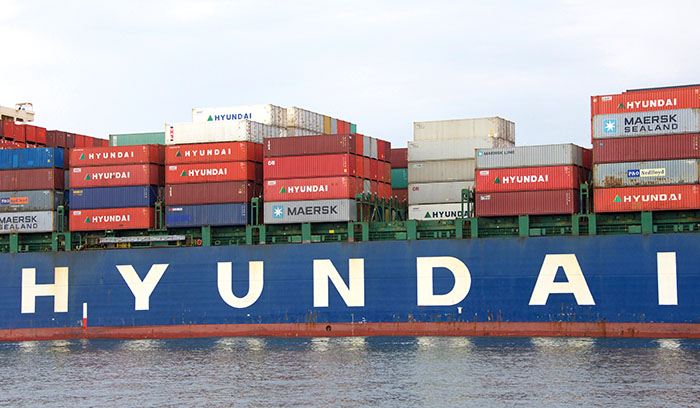 Analysts are factoring HMM's mega-ship order into their market research with expectations that the order will go ahead. Photo credit: Shutterstock.

There is still no confirmation of Hyundai Merchant Marine’s order for as many as 14 mega-ships of 22,000 TEU, but the widely expected order has left market watchers puzzling over the South Korean carrier’s strategy.

Vessels of that size can only be deployed on Asia-Europe where HMM has no services after withdrawing from the trade in April 2017 during the debt restructuring after compatriot Hanjin Shipping collapsed. HMM offers slot charters on six Asia-North Europe loops on 2M Alliance services operated by Maersk Line and Mediterranean Shipping Company within the 2M and HMM arrangement that was implemented in April 2017.

However, the carrier surprised the market last week with an announcement that it will step back into Asia-Europe with the launch of the Asia Europe Express (AEX) service deploying the smallest ships on the route — 10 Panamax vessels of 4,700 TEU. The port rotation of the 30-day service has not been finalized, but it will begin on April 7 from Busan.

Alphaliner said the relatively small size of the vessels used on the AEX should put HMM at a significant cost disadvantage against its rivals, but it said the new service launch was a prelude for a more substantial return to Asia-Europe. The analyst said HMM’s mega-ship order’s delivery starting in 2020 would coincide with the expiry of the 2M and HMM arrangement in April of that year.

Drewry Shipping Consultants also believes the impending mega-ship order and the new Asia-Europe service are connected. The analyst noted that HMM has two years left to run on a slot-charter agreement signed in 2016 with 2M carriers Maersk Line and MSC, and presumably sees the mega-ships either as a bargaining chip to continue that partnership, as it will have more to bring to the table, or as leverage for full membership of another carrier group. Or in the worst case scenario, it would have sufficient means to operate independently, building on the custom generated by the AEX service.

Drewry questioned whether the mega-ship order is the sum of HMM’s ambitions, or if it is merely the start of a massive expansion, in the middle of a shareholder-mandated restructure in late 2016, when HMM announced a bold vision to control 5 percent of the world fleet by 2021. This target was made more difficult when the carrier was forced to relinquish a number of charter vessels to Maersk and MSC as a condition for sharing space with them. The 2M carriers had to appease customers fearful of a repeat of the situation where cargo booked with Hanjin Shipping’s service partners was left stranded when that Korean line went bankrupt.

According to IHS Markit newbuilding data, HMM only has two 11,000 TEU vessels on order, but Drewry said if the Korean flagship maintained its expansion goal, the first batch of new mega-ships would just be the start. From its current position — operating approximately 1.5 percent of the world fleet — the analyst said it will need a total of 1.2 million TEU based on today’s active fleet and orderbook to reach its target. To do so will require an additional 830,000 TEU (or 38 ships of 22,000 TEU) — more than twice what it currently has in operation.

SeaIntel also looked at how HMM would operate with its mega-ships, assuming that the orders would be delivered one vessel per month, with the first vessel to be delivered in May 2020, and then one vessel delivered a month thereafter.

The analyst said it was likely that the 12 vessels of 22,000 TEU would be phased into a completely new service outside of the existing alliance structures. “As it is not possible to launch a service with new vessels being delivered once per month, we have assumed that HMM will charter or phase in 11 13,000 TEU vessels when they take delivery of the first 22,000 TEU vessel in May 2020, and then phase one 13,000 TEU vessel out as each additional 22,000 TEU vessel is delivered,” SeaIntel said.

Alphaliner said HMM’s AEX was the only new string to be introduced on the route so far this year, and it would add about 2 percent to the total Asia-North Europe capacity. Together with upgrades planned on existing strings, the average weekly capacity on the route would increase by 9.6 percent from 257,000 TEU in the second quarter of 2017 to 282,000 TEU in the second quarter of 2018, the analyst said.