With the bankruptcy of Hanjin Shipping in 2016, and the termination of its services, HMM, formerly known as Hyundai Merchant Marine, has become the leading Korean national containers carrier. The world's 14th largest container line in terms of vessel capacity, HMM moves the lion’s share of South Korea's exports. Following the bankruptcy of Hanjin, HMM’s cargo volume increased.

With the demise of Hanjin, HMM and SM Line are now the only two South Korean liner operators offering long-haul routes. Its range of offerings include all-water services that connect East Asia via the Suez and Panama canals with US East Coast ports. Its Asia Loop connects East Asia to major European ports. Other services include its Korea-Middle East Express, Asia Gulf Express, and services that connect East Asia with South America’s east and west coasts.

Solving for Uncertainty: A Guide to Variable Transportation Budgets
END_OF_DOCUMENT_TOKEN_TO_BE_REPLACED 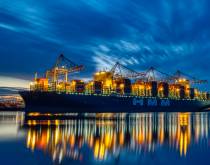 15 Jun 2021
The latest shipping line to be hit by a cyberattack, HMM said the incursion has crippled its email systems but has not affected its booking documentation functions and has not resulted in any data breaches.
MORE »

HMM doubles rate levels in Q1 profit turnaround
14 May 2021
HMM has joined its peers in reporting a profitable first quarter, and the South Korean carrier expects the high rate/strong demand environment in container shipping to continue at least through the second quarter.

HMM narrowed losses in 2019, but faces precarious market
13 Feb 2020
South Korea-based container carrier HMM managed to cut its operating losses and increase revenue in 2019, but the start of the new year has come with mounting challenges.

Ocean Alliance tweaks network as rivals change members
09 Jan 2020
The first of the global container carrier alliances has announced its 2020 schedule, with the other two groupings due to reveal their networks soon.

Alphaliner raises alarm over possible overcharging on low-sulfur fees
11 Dec 2019
Carriers have struggled to lift spot rates on the Asia-Europe trade, and the wide variations in low-sulfur surcharge levels have an analyst asking questions.

Asian carriers take diverging logistics paths
29 Mar 2019
Container lines with the financial muscle — or state backing — are forging ahead with strategies aimed at controlling a greater portion of the container supply chain.

Market share-hunting HMM hints at 2M renewal talks
06 Dec 2018
HMM is trying to reverse a loss trend that most recently saw it post a $147 million net loss in the third quarter, which it blamed on high fuel prices.

Maersk reports profit despite fuel costs; HMM doesn’t
14 Nov 2018
The third-quarter earnings of Maersk and HMM, released Wednesday, send a warning to the container shipping industry of the challenge in recouping higher bunker fuel costs — a challenge that will only increase further when the global low-sulfur fuel rule takes effect.

SM Line CEO: No plan or path to merger with HMM
13 Nov 2018
“There is no will or reason to merge the two companies. SM Line will continue to build its own business models and we will do our part to survive in the market independently,” said SM Line CEO Kim during a meeting at the company’s headquarters in Seoul.

HMM orders mega-ships amid shareholder frustration
09 Nov 2018
State-owned Korea Development Bank, the primary lender and shareholder of HMM, is hardening its attitude towards the loss-making carrier.

HMM's volume gains wiped by lower rates, costlier fuel
14 Aug 2018
Hyundai Merchant Marine, which recently announced its withdrawal from the Trans-Atlantic trade, said it expects higher freight rates and load factors through the third-quarter peak season but cautioned cargo volume is likely to fluctuate due to “changes in [the] international situation.”

Trans-Atlantic carriers cut services as US-EU trade growth slows
27 Jul 2018
Although trade tensions between the United States and the European Union and their impact have been muted so far in 2018, trade stakeholders know that could change dramatically and quickly.

NYSHEX signs HMM to its growing carrier network
24 Jul 2018
The exchange is about encouraging carriers and shippers to move past a system driven by uncertainty: beneficial cargo owners face no penalty for booking a certain volume of cargo on a ship, and then failing to send it; and carriers face few consequences for leaving containers on the dock.

Container lines end Iran services ahead of US sanctions
09 Jul 2018
Ocean carriers want to avoid being caught up in secondary sanctions that will be imposed by the United States on companies dealing with Iran.