With a fleet of more than 220 modern container ships and a total transport capacity of roughly 1.6 million TEUs, Hapag-Lloyd is one of the world's leading container lines with about 12,000 employees and nearly 400 offices in more than 125 countries worldwide. Hapag-Lloyd’s containerized capacity of about 2.6 million TEUs, and includes one of the largest and most modern fleets of refrigerated storage ships.

Hapag-Lloyd’s 2017 merger with United Arab Shipping, then the world’s 18th largest container shipping company, added 53 vessels to Hapag-Lloyd’s fleet, and an additional capacity of about 400,000 TEUs, most notably for its service between the Middle East (Dubai) and the Indian subcontinent. Its wide range of containerized services cover a broad range of trade lanes for shippers involved in Atlantic Trade, Trans-Pacific Trade, and Europe-Asia trades. 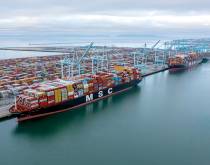 07 Sep 2021
When ships sit outside ports and containers are not picked up and returned quickly, that loss of effective capacity causes record spot rates, high demurrage and detention costs, and lengthening transit times.
MORE »

Hapag-Lloyd warns of shipping tightness through 2022
25 Jun 2021
Hapag-Lloyd’s North American president said shippers face the prospect of elevated rates through 2022 as the ability of all ocean and motor carriers to inject additional capacity is at its limit.

Hapag-Lloyd, ONE fully onboard with TradeLens
24 Jun 2021
TradeLens has followed expansion into China with full integrations of Hapag-Lloyd and Ocean Network Express, meaning the platform now has five of the world’s top six container lines.

Extra-loader vessels easing India–US capacity pressure
17 May 2021
Hapag-Lloyd has announced three ad-hoc sailings between the Indian Subcontinent and the US East Coast in May and June to feed a resurgent market for US imports from India, Bangladesh, and Sri Lanka.

Hapag-Lloyd finds new yard for NY-NJ empty containers
04 May 2021
Hapag-Lloyd said truckers in the port of New York and New Jersey will be able to start dropping off empties at a new container yard and that it is working to sweep up empties that have built up at marine terminals there amid the US import surge.

Hapag-Lloyd eyes new debt to finance decarbonization
23 Mar 2021
Hapag-Lloyd hopes capital markets will underwrite its transition to a low-carbon future with plans to market its first “green bond,” with the new debt used in part to purchase ships that run on alternative fuels.

TPM21: CMA CGM to deploy first LNG ships on US-Asia trade in 2021
25 Feb 2021
With the deployment of LNG-powered ships in the trans-Pacific trade, CMA CGM is banking on North American shippers taking greater interest in the carbon output of their supply chains in the coming years.

Ag shippers slam carriers for refusing some export loads
23 Oct 2020
US exporters are crying foul as at least one trans-Pacific carriers has begun turning down shipments of low-revenue agricultural exports in order to expedite the return of empty containers to Asian load ports to carry much higher-paying US imports of consumer merchandise.

Record Asia–ECSA rates set to climb higher on soaring demand
23 Sep 2020
Similar to the current market in the trans-Pacific trade, container freight rates from Asia to the East Coast of South America have been buoyed by surging consumer demand and a rush of exports leaving China ahead of Golden Week.

Instant quoting will be must-have for liner carriers: Maersk CEO
02 Sep 2020
Uptake in digital quoting tools at top container lines suggests every carrier will need that capability even if the usage and benefits of such tools aren’t yet clearly defined.

Rail blockade forces Halifax ship diversions
20 Feb 2020
Halifax and the ports of Montreal and Vancouver have endured cargo backlogs at marine terminals and disruption to domestic and international shipments.

Hapag-Lloyd boosts profitability despite difficult fourth quarter
19 Feb 2020
A weak container shipping environment in the fourth quarter was unable to prevent Hapag-Lloyd growing both revenue and average freight rates across the year.

Prince Rupert rail restored, but blockade impact spreads east
18 Feb 2020
A rail blockade in Ontario as part of a more than week-long First Nation protest against a proposed oil pipeline in Canada remains in place, and CN’s eastern Canadian network is at a near standstill.

Dynamic ocean pricing to change spot-contract mix
30 Sep 2019
The convergence of contract and spot rates for ocean freight and the increased availability of instant digital quoting tools is pushing more cargo to the spot market and changing shipper negotiation strategies for long-term contracts.

Hapag-Lloyd kicks off online reefer program
04 Jul 2019
Germany-based carrier Hapag-Lloyd is on a campaign to modernize its reefer fleet and has rolled out plans to bring all the containers online and trackable in real time.