Great White Fleet is a shipping transportation company serving the Americas and Europe. The company got its start in the late 1800s carrying bananas from Central America to the United States. Great White Fleet has expanded its services into other refrigerated and dry cargo as well. The Charlotte, North Carolina-based company operates a fleet of 20 ships with a total carrying capacity of 13,423 TEUs, as of Aug. 11, 2014, according to global shipping analyst Alphaliner.

Great White Fleet was the 20th-ranked container carrier in U.S containerized import trade in 2013, with volume of 177,536 TEUs, up 8 percent year-over-year, giving it market share of 1.0 percent. It was No. 27  in U.S. containerized export trade in 2013, with volume of 75,889 TEUs, down 5.8 percent year-over-year, with market share of 0.6 percent. For more carrier rankings see the JOC’s Top 40 Container Carriers special topic.

US Offshore Wind: Where Is the Market Heading?
Learn how IFP Corp uses technology to improve operational efficiency and improve margins
END_OF_DOCUMENT_TOKEN_TO_BE_REPLACED 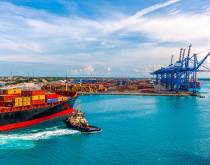 22 Nov 2019
Growth in US imports from the Caribbean and Central America was unable to offset a decline in exports in the first nine months of 2019.
MORE »

US freight economy ‘rebalancing’: US Bank