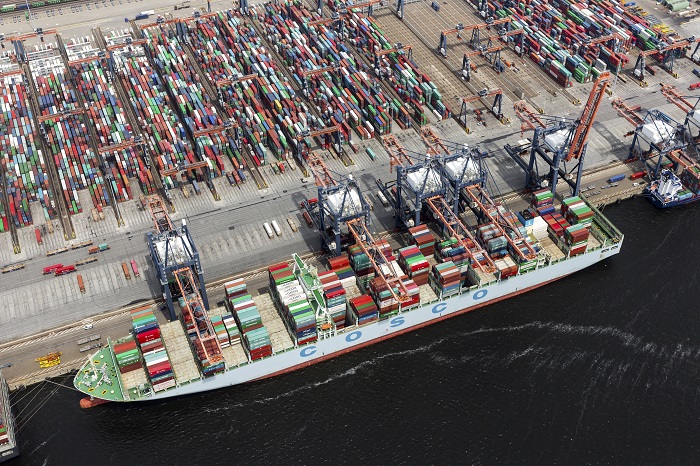 Cosco has continued to aggressively expand into landside logistics, building on Beijing’s Belt and Road strategy to grow its terminal and inland footprint in Asia and Europe. Photo credit: Shutterstock.com.

Maersk Line may have captured the headlines with its new focus on becoming a global provider of integrated container logistics, but it is a strategy that China’s Cosco has been pushing for the last couple of years with increasing assertiveness.

Cosco Shipping Holdings, China's largest shipping company, has continued to aggressively expand into landside logistics, building on Beijing’s Belt and Road strategy to grow its terminal and inland footprint in Asia and Europe.

The group — which consists of carrier unit Cosco Shipping and terminal operator Cosco Shipping Ports  — steamed back to profitability in 2017, with a recovering market and freight rates driving up revenue 22 percent compared with 2016 to $14.3 billion, with generous government subsidies leading the company to a $423 million net profit.

Cosco has returned to profitability at the right time. Not only is the container shipping market recovering — the carrier’s volume in 2017 increased by 23.7 percent to 20.9 million TEU while Cosco Shipping Ports handled more than 100 million TEU during the year — Beijing’s is also placing increasing importance on investment along the land and ocean Belt and Road routes.

Cosco Shipping Holdings said it had made progress regarding the construction of logistics channels along the Belt and Road route. By consolidating its global shipping networks, the company said it has increased service frequency and efficiency along the ocean route, and also connected the shipping routes with other important, emerging, regional markets, such as the United States, West Africa, the Caribbean, and North Europe.

It is difficult to separate Cosco’s global shipping network from its Belt and Road routes, with the carrier including most of its services under the trade strategy umbrella. For instance, Cosco said 62 percent of its entire container shipping capacity was deployed on the Belt and Road routes, comprising 180 container vessels with a total capacity of 1.15 million TEU.

But it is in the terminal and inland services where the carrier’s move into controlling the landside supply chain can be seen more clearly. This is especially true within China, where Cosco operates more than 150 sea-rail container transportation routes, covering more than 100 major ports and hinterland stations across 27 provinces, autonomous regions, and centrally administered municipalities.

Cosco stated early last year, “The company will also increase its efforts in construction of ancillary facilities in important logistic nodes in the supply chain, and gradually achieve the transition from a shipping carrier to a provider of comprehensive container logistics solutions.”

Those efforts in 2017 began in January when Cosco Shipping Ports entered into a strategic cooperation agreement with Qingdao Port International, taking an 18.41 percent equity interest.

Outside China, Cosco continues to strengthen the position of Piraeus Port in Greece as a transportation hub and accelerate the development of what it called the China-European sea-rail express business. In 2017, the freight volume carried on the service, which includes China-Europe rail, increased by 134 percent compared with the previous year, Cosco said in its earnings statement. Cosco Shipping in May 2017 acquired 24.5 percent equity interest in the KTZE-Khorgos Gateway, the rail hub on the Kazakhstan-China border that is a key point in the landbridge.

Then in October 2017, Cosco Shipping Ports completed its acquisition of a 51 percent equity interest in Noatum Port Holdings, a port company in Spain. The controlling stake gives China’s second-largest port operator access to several terminals on the Iberian Peninsula.

In November 2017, Cosco Shipping Ports began the construction of a terminal in Abu Dhabi, and in the same month completed the acquisition of additional equity interests in APM Terminals Zeebrugge in Belgium, taking full control of operations.