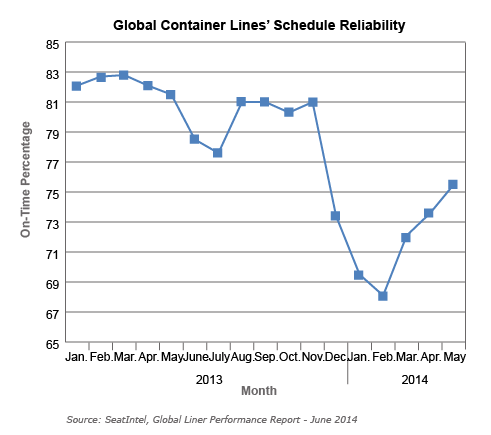 Global liner schedule reliability was down year-over-year in May but up month-to-month.

The gap between global liner schedule reliability this year and last year has narrowed, although monthly performance in May was still down year-over-year, according to a new report from SeaIntel Maritime Analysis.

Morten Berg Thomsen, a shipping analyst at SeaIntel, told the JOC that schedule reliability has improved month-to-month since February as winter storms in several regions have subsided. Icy conditions earlier this year caused congestion at some U.S. East Coast ports, which affected carriers’ schedule reliability in the trans-Atlantic and trans-Pacific trade lanes. Thomsen said there were also a number of winter storms in the Bay of Biscay, near France and Spain, that negatively affected Asia-North Europe and trans-Atlantic services, in addition to poor weather conditions in North China.

Improving traffic conditions at the ports of Hamburg, Germany, and Rotterdam, the Netherlands, among others, have also helped improve schedule reliability numbers, Berg Thomsen said. In addition, schedule reliability generally is lower at the beginning of each year as carriers typically reshuffle their networks then, he said.

May was the third consecutive month that container lines’ schedule reliability increased month-to-month, rising from 73.3 percent in April to 75.5 percent, meaning the gap between the year-over-year performance contracted from 8.8 percentage points in April to 6.0 percentage points in May, according to SeaIntel. Global schedule reliability in May was based on 10,677 vessel arrivals, SeaIntel said.

Eighteen of the Top 20 carriers improved their performance from April to May, with the exceptions “K” Line and Mediterranean Shipping Co., SeaIntel said. Maersk Line, Hamburg Süd and CSAV remained the most reliable carriers in May, with reliability of 87.1 percent, 85.6 percent and 82.0 percent respectively, although NYK Line, OOCL and Zim improved their performance the most, according to the analyst.

Dan Smith, a partner at the Tioga Group, told the annual meeting of the Agriculture Transportation Coalition in San Francisco last week that beneficial cargo owners and harbor trucking companies should pick carriers that run ships on time. Recent reports from Europe and the U.S. indicate that the introduction of ever-larger container vessels into the global trade lanes is playing havoc with carriers’ on-time performance. Late ships have an impact on all segments of the transportation supply chain, including the ability of the marine terminal to unload and reload the vessels.

The most significant schedule reliability changes recorded from April to May were in the South America west coast-Asia, trans-Atlantic westbound and Europe-Oceania lanes, which saw gains in schedule reliability of 10, 10 and 11 percentage points respectively, SeaIntel said.

“It is good news for both shippers and carriers that the trans-Atlantic trade lanes are finally improving, as the poor performance has been costly for shippers in terms of extended and unreliable supply chains, and for the carriers in terms of omitting port calls, rerouting containers and getting the vessels back on schedule,” said Alan Murphy, chief operating officer and partner at SeaIntel, in a written statement.

In terms of container delivery, 14 of the 32 routes saw an increase in performance month-to-month in May. The trans-Pacific eastbound lane and both directions of the trans-Atlantic routes saw improvement in container delivery in May, compared with April, while the Asia-Mediterranean lane was flat and Asia-North Europe experienced a decline.