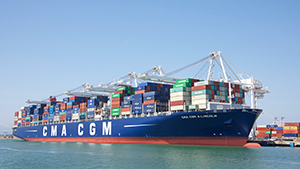 CMA CGM S.A., headquartered in France, is a leading worldwide shipping group, whose various subsidiaries operate on 200 shipping routes between 420 ports in 150 different countries, ranking it fourth behind Maersk Line, MSC and COSCO. Its North American headquarters are in Norfolk, Virginia, United States. 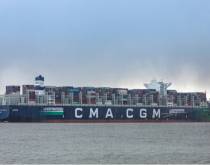 25 Feb 2021
With the deployment of LNG-powered ships in the trans-Pacific trade, CMA CGM is banking on North American shippers taking greater interest in the carbon output of their supply chains in the coming years.
MORE »

CMA CGM offers shippers immediate path to cut emissions
17 Nov 2020
By giving customers a chance to designate shipments for delivery on ships generating fewer emissions than those powered by bunker fuel, CMA CGM is able to capitalize on its unique assets: LNG-powered ships

MSC, CMA CGM tout TradeLens benefits as they complete integration
15 Oct 2020
TradeLens said Thursday that Maersk’s liner competitors MSC and CMA CGM are both “fully integrated” into the platform, which could make it more appealing for cargo owners and 3PLs to use the blockchain-based solution.

CMA CGM warns cyber attack may have caused data breach
30 Sep 2020
Access to container status information remains affected in the wake of the CMA CGM cyber attack, with a visibility provider saying containers booked by the carrier can only be tracked if the bookings occurred before the disruption.

Disruptions from CMA CGM cyber attack extend into second day
29 Sep 2020
Forwarders, shippers and software providers connected to CMA CGM’s systems continued on Tuesday to sort through the effects of a malware attack on the Marseille-based container line.

Logistics technology reshapes trade finance for shippers, suppliers
14 Aug 2020
Technology has the potential to solve long-running financing tensions between suppliers and importers, and logistics networks and service providers are likely to be the focal point for these solutions.

CMA CGM simplifies two-brand trans-Pacific network
06 Jul 2020
The move, bringing an end to APL’s 170-year legacy as a commercial trans-Pacific carrier, is part of the Marseille-based shipping group’s broader effort to clarify its offering to customers since a series of major acquisitions.

COVID-19 to accelerate logistics industry toward digital, low-growth reality
30 Apr 2020
The COVID-19 crisis will push the freight transportation industry closer to a future where digitalization is nearly omnipresent, automation is ingrained, and logistics has adapted to slower trade as the economic windfalls of globalization fade further.

Reefer surcharges rocket due to Chinese port plug scarcity
14 Feb 2020
US exporters of refrigerated (reefer) cargo are facing costly delays in China and equipment shortages in the United States due to extended factory closures and limitations on worker movement caused by the coronavirus outbreak.

Sartini takes over CMA CGM terminal role
29 Jan 2020
CMA CGM has made some senior leadership changes as part of a group restructuring.

CMA CGM unveils networking service for customers
16 Jan 2020
Importers and exporters shipping with CMA CGM are being offered a matchmaking service that will allow them to leverage the carrier’s global network in search of new markets.

CMA CGM to offload ships, terminals to ease rising debt
25 Nov 2019
CMA CGM will dispose of ships and terminals over the next few months to lighten its capital structure and raise cash to pare down its significant debt levels.

Dynamic ocean pricing to change spot-contract mix
30 Sep 2019
The convergence of contract and spot rates for ocean freight and the increased availability of instant digital quoting tools is pushing more cargo to the spot market and changing shipper negotiation strategies for long-term contracts.