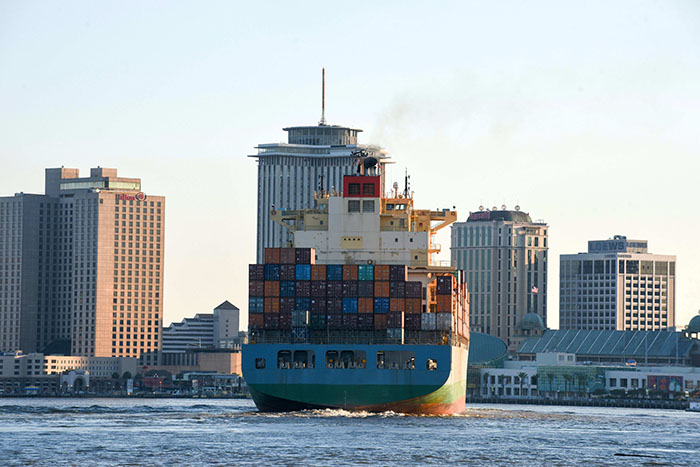 Growth in Asian imports to the Gulf Coast skyrocketed 64.3 percent in November, more than double the year-over-year percentage growth seen on the East and West coasts. Photo credit: Port NOLA.

After a second half of 2020 in which unprecedented trans-Pacific container volumes caused severe congestion up and down Southern California supply chains, THE Alliance is adding capacity between Asia and the US Gulf Coast via a new string that will begin in April.

In addition to consumer import goods and traditional agricultural and petrochemical exports, the US Gulf Coast in recent years has become a hub for exports of resins used in the production of plastics.

The new East Coast 6 (EC6) string, THE Alliance’s first in the Asia–US Gulf trade, will have a full port rotation of Kaohsiung, Hong Kong, Yantian, Ningbo, Shanghai, Busan, Houston, Mobile, New Orleans, and back to Kaohsiung, according to a joint service announcement from the carriers. The number and capacity of vessels to be deployed on the loop were not disclosed.

In announcing a range of changes to their overall service network that will take effect in the spring, the members of THE Alliance — Hapag-Lloyd, Ocean Network Express (ONE), Yang Ming, and HMM — said the adjustments were meant to “offer customers increased capacity on trade lanes for which there is greater demand.”

Total US imports from Asia jumped 27.2 percent year over year in November, the fifth straight month of year-over-year growth in the eastbound trans-Pacific. Although from a much smaller base, growth in Asian imports to the Gulf Coast skyrocketed 64.3 percent for the month, compared with year-over-year growth rates of 30.1 percent on the East Coast and 24.5 percent on the West Coast.

“The EC6 will allow us to better serve our current customers who have voiced their desire for options between the US Gulf and Asia, as well as open up a growing market for us,” Jay Y. Lee, chairman and CEO of HMM America, said in a separate statement published by the Port of Houston.

“The new EC6 service will provide a new premium solution to our customers in Texas, Louisiana, Alabama, and the Southern United States,” added Uffe Ostergaard, president of Hapag-Lloyd, North America.

The announcement of the new service comes just a few days after Congress passed a 2020 Water Resources Development Act (WRDA) that provides $625.2 million in funding for the expansion of the Houston Ship Channel, which will allow larger vessels to pass each other safely when entering and exiting the port.

The Port of New Orleans (Port NOLA) is also engaged in a dredging project that will deepen the lower reaches of the Mississippi River to 50 feet, eventually allowing vessels up to 14,000 TEU to call the port, and a $100 million expansion of its Napoleon Container Terminal. The port is also considering whether to add a second container terminal.

Port NOLA said in a statement the additional capacity provided by the EC6, the port’s third direct connection with Asia, will support its “growing export business for commodities such as resin, poultry, forestry and agricultural products,” as well as “import growth from overseas markets.”

Navigating the Winding Roads This Peak Season & Beyond
END_OF_DOCUMENT_TOKEN_TO_BE_REPLACED