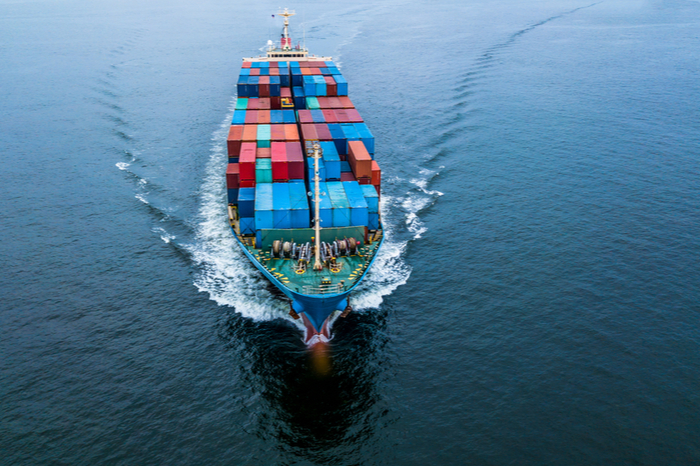 Spot rates have held up strongly on the Asia–Europe trade in both directions despite weak volume, with the backhaul prices performing especially well. Photo credit: Shutterstock.com.

Freight rates on the headhaul and backhaul Asia–Europe trades are converging as carriers’ tight grip on capacity lifts Europe eastbound prices to levels not seen in almost three years.

Spot rates from Rotterdam to Shanghai increased 10 percent over the past week to $1,221 per FEU, up 116 percent from the same week last year, according to Drewry’s World Container Index (WCI). The last time the backhaul rate was at that level was October 2017. The headhaul Shanghai to Rotterdam spot rate was down 3 percent this week to $1,650 per FEU, WCI data show, but is still up 13 percent year over year.

Lars Jensen, CEO of Sea-Intelligence Maritime Consulting, said backhaul rates were now 74 percent of the headhaul rate, well above the average of 53 percent over the past eight years.

“In 2017, a ratio around 75 percent was basically sustained for some six months,” Jensen wrote in a LinkedIn post. “Furthermore, in 2015/16 we did see spikes above 100 percent as well, but at the time these spikes in the ratio were driven by weakness in the headhaul rate, not strength in the backhaul rate.”

Carriers have tightly managed capacity through the coronavirus disease 2019 (COVID-19), blanking an extensive number of sailings on the Asia–Europe trades to match plunging demand as economies in Europe were locked down.

To balance the falling volume with capacity, carriers will cancel 94 scheduled sailings on Asia–Europe routes from April through August as a direct result of the coronavirus, according to the Sea-Intelligence Sunday Spotlight. The Ocean Alliance has yet to announce its Q3 blank sailings program.

By removing so much capacity, carriers have been able to avoid a rate collapse. The Shanghai Containerized Freight Index (SCFI) has the Asia–North Europe headhaul spot rate rising 1.3 percent this week to $886 per TEU, the 18th straight week of increases. Both the WCI and SCFI weekly rate movements are tracked at the JOC Shipping & Logistics Pricing Hub.

Adding to the rate strength were Asia–Europe freight all kinds (FAK) rate increases in both trade directions imposed by some carriers on June 15, with a new round of eastbound and westbound increases set for July 1. CMA CGM will even impose a peak season surcharge of $200 per TEU on the Asia–Europe trade on July 1.

Nilesh Tiwary, manager of Drewry Maritime Financial Research, said carriers have realized that to survive in such a demand-crushing environment, they need to do whatever is necessary to protect their cash flows.

Neil Glynn, managing director and head of European transport equity research at Credit Suisse, said carriers were beginning to see the fruits of the last round of consolidation a few years ago.

“We have had a long journey to get to this position over the last few quarters, and there has been increasing evidence of a change in behavior,” he said in a JOC Uncharted interview. “The liners have been focusing on higher-quality revenues, and you can see that through a range of strategies, such as CMA CGM buying CEVA, or Maersk’s more end-to-end focus.”

Glynn said parallels could be drawn with other transport sectors, such as air freight, the global express sector, and the North American rail sectors. “A simple common thread running through those sectors is a small number of players controlling the market, making supply decisions based on demand and returns, and the end result has been pretty disciplined on capacity and pricing,” he said.

“A more coherent approach does seem to be presenting itself, at least as far as we can see today.”