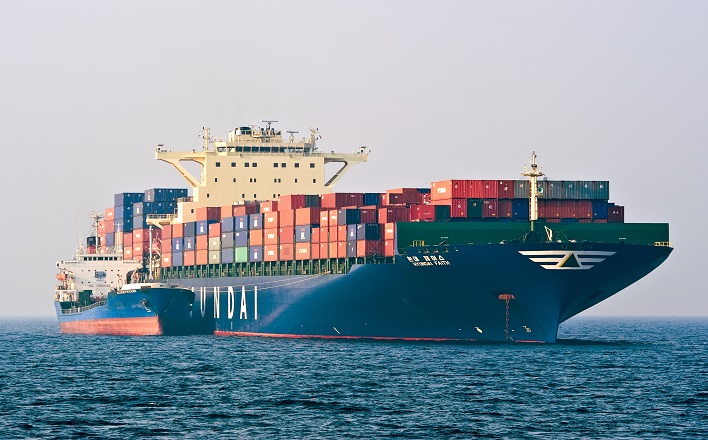 The unveiling of new bunker fuel adjustment factors from three of the largest global container lines over the last week has focused the industry’s attention to billions of dollars of extra cost hitting an already volatile industry. (Above: A container ship during refueling.) Photo credit: Shutterstock.com.

The container shipping industry won’t have a handle on the cost of low-sulfur bunker fuel needed to help ocean carriers meet a global mandate until early to mid-2019, even though the rule takes effect in less than 14 months.

Even so, higher crude oil forecasts, a low-sulfur fuel estimate from Jefferies investment bank, the expanding spread between low-sulfur marine gasoil and its high-sulfur counterpart, and an analysis of four major port-to-port pairs suggest a steep bill that carriers will seek to recoup from beneficial cargo owners (BCOs) and forwarders. But so-called pricing discovery for the new fuel, of which various types are still being created, won’t be finished until between the first and second quarters of 2019, said Matthew Muenster, senior manager of applied knowledge at Breakthrough, a transportation fuel consultantcy.

The cost of low-sulfur fuel, needed to meet the International Maritime Organization’s (IMO’s) mandate to reduce emissions from 3.5 percent to 0.5 percent starting Jan. 1, 2020, will be about 50 percent more than the current fuel type of ISO 380, Jefferies estimates. Average bunker fuel prices through August were up 43.7 percent from June 2017 to $444 per metric ton ($404 per ton) across Rotterdam, New York-New Jersey, and Shanghai.

The unveiling of new bunker fuel adjustment factors (BAFs) from three of the largest global container lines over the last week has focused the industry’s attention to billions of dollars of extra cost hitting an already volatile industry. Estimates on the cost of the container-shipping industry meeting the mandate range from $5 billion to tens of billions of dollars, but container lines are uniform in saying that the higher operating expenses have to be passed to BCOs.

The spread between low-sulfur and high-sulfur fuel oils has also been expanding since July, suggesting an even higher premium for the low-sulfur bunker fuel, Muenster said. The cost difference hit above $200 in November and has kept above that level since. At the same time, expectations that crude oil prices were cresting have faded, with analysts now warning that Brent crude could hit $100 per barrel, largely because of US sanctions restricting Iranian supply. Crude oil prices hit a near four-year high in late September, nearly $82 per barrel.

Additionally, a Breakthrough analysis of the fuel impact on four major lanes — eastbound routes from Shanghai to Seattle and Long Beach and westbound rates from Rotterdam to New York and Kingston, Jamaica — suggest that aggregate fuel prices will be 36.7 percent higher per TEU when the IMO rule takes effect compared with the price in August.

In the meantime, the container-shipping industry appears to be warming up to scrubber adoption, with Maersk changing its position against to limited installation. Mediterranean Shipping Co. is taking the scrubber approach, while CMA CGM has said it will burn low-sulfur fuel and power nine of its mega-ships, which are on order, via liquified natural gas (LNG).

While LNG fueling has potential and carriers are giving scubbers another look because of rising oil prices, Muenster and IHS Markit energy analysts still expect that the majority of ships will meet the mandate by burning low-sulfur fuel. Scrubbers cost $5 million to $10 million and can take three to six months to install.

Muenster warns that current BAFs will be challenged when accounting for complexities added through carriers meeting the mandate. For example, the majority of BAF programs don’t take into account the impact of slow steaming, fuel cost differences that depend on where the ship bunkers, and the cost of savings via LNG and scrubber adoption.